Good morning, and May the Fourth be with you. Welcome back to 10 Things in Politics, your weekday look at the biggest stories in DC and beyond. Sign up here to receive this newsletter.

Send tips to [email protected] or tweet me at @BrentGriffiths.

Here’s what we’re talking about:

One thing to look out for today: Facebook’s so-called Supreme Court is expected to issue its decision on whether former President Donald Trump should remain barred from the platform.

1. ANOTHER SIDE OF DC: In the aftermath of January 6, when a mob of pro-Trump rioters stormed the Capitol and traumatized their city, a few Washingtonians took it upon themselves to try to help catch some of the insurrectionists. Their efforts to “catfish” rioters on dating apps before reporting them to the feds drew national headlines. Such exploits were also prominently displayed on an anonymously run Instagram account called Overheard District.

Insider caught up with the manager of DC’s version of the pandemic breakout hit DeuxMoi. 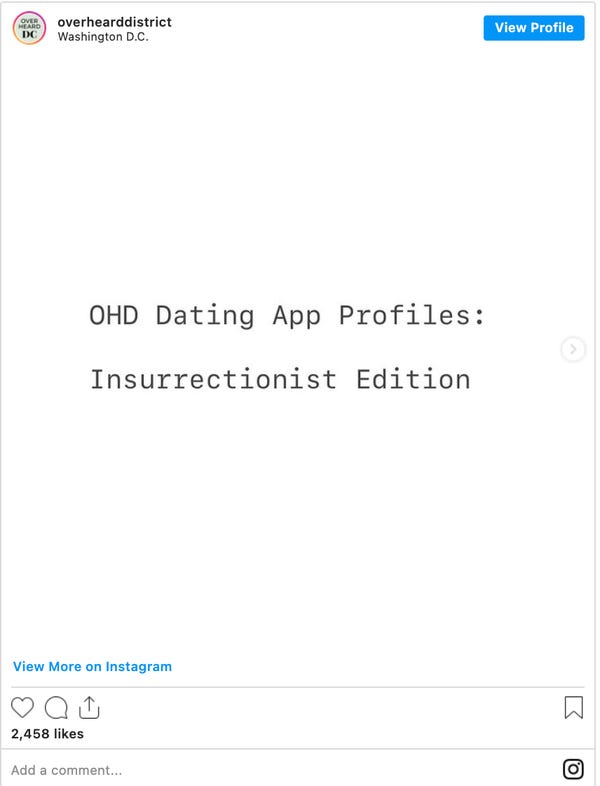 Here’s a peek at the conversation:

Find out what’s next for Overheard District from the rest of my colleague’s exclusive interview.

2. Rep. Liz Cheney is in hot water with some fellow Republicans, again: Allies of House Minority Leader Kevin McCarthy are vowing to oust Cheney, the No. 3 House Republican, from her leadership post before the month’s end, The Hill reports. Cheney and Trump got into it again Monday after Trump tried to co-opt the term “big lie” to defend his repeated lies about the 2020 election. Cheney said Trump was “poisoning our democratic system.”

3. Biden formally reverses reversal on refugee cap. But he concedes his new goal may not be reached: President Joe Biden is formally pledging to accept as many as 62,500 refugees by September after taking office with Trump’s historically low cap of 15,000 in place. Biden reiterated that the goal remained 125,000 for the next fiscal year starting in October, but he conceded that too would be difficult to reach.

4. Bill and Melinda Gates are ending their 27-year marriage: The co-leaders of their namesake foundation said they remained committed to philanthropic projects they’d funded through it, including more than $1 billion in response to the coronavirus pandemic. The New York Times reported that the couple had faced relationship struggles in recent years. Here’s a look at their marriage.

5. The FDA will reportedly authorize a vaccine for adolescents by next week: Pfizer-BioNTech’s COVID-19 vaccine could be expanded for adolescents ages 12 to 15 by early next week, The New York Times reported. Once the FDA makes its decision, a Centers for Disease Control and Prevention panel will also need to weigh in. Pfizer said in March that its vaccine was highly effective in a trial of over 2,000 adolescents.

6. Warren Buffett has officially confirmed his successor: The Oracle of Omaha told CNBC that Greg Abel, a vice chairman who leads Berkshire Hathaway’s noninsurance businesses, would replace him in the event of an emergency and was also waiting in the wings. Speculation has fanned for years on who would replace Buffett, who still has no plans to retire. Meet the 58-year-old who would have big shoes to fill.

7. An elevated subway platform collapsed in Mexico City, killing at least 20: The subway line that collapsed has been plagued by structural problems almost since its opening in 2012. In 2014, a stretch of the route between Tláhuac and Atlalilco had to be shut down for several months to address structural problems. More on the unfolding story here.

8. The FBI shot a man just outside CIA headquarters: The FBI said a man attempted to drive into the CIA’s Langley headquarters in McLean, Virginia, and was shot by FBI special agents after an armed standoff. No CIA officers or FBI agents were reported to be injured, and the person was transported to a local hospital.

9. States continue to roll back pandemic restrictions: “According to recent data from the Kaiser Family Foundation, 27 states have fully reopened, up from 22 on March 15,” The Journal reports. Experts caution that Americans still need to follow public-health guidance. “The only way we’ll know if the decision is correct is two to three weeks after the decision is made,” one expert told the paper.

10. A House panel had to recess after the ‘Galaxy Quest’ theme started playing in the background: For a little over 20 minutes, audio at a hearing of the House Appropriations subcommittee on energy and water was interspersed with music from the Village People as well as sound from the 1999 movie “Galaxy Quest.” Part of the appropriations hearing was punctured with a famous line from the movie: “By Grabthar’s hammer, you shall be avenged!”

Today’s trivia question: President Ronald Reagan may be known for “Star Wars,” but the Obama administration had to issue an official response to a petition calling for the construction of something from a time long ago in a galaxy far, far away. What was it? Email your guess and a suggested question to me at [email protected]