India’s growth in the last three financial years has averaged just 1.9%.
It is natural to project rapid growth from this low base.
Crucial to that would be the assumption that the economy has suffered no lasting damage from the pandemic, observes T N Ninan.

Which large economy has performed best during the pandemic, the subsequent recovery, and the period beyond — starting from 2020, stretching to this year (2022), and incorporating the outlook for 2023?

That interesting question finds somewhat surprising answers in the data presented by the International Monetary Fund in the latest quarterly update of its World Economic Outlook.

The outstanding performer, in terms of economic growth after the pandemic hit, is a surprise — the country now known as Turkiye.

Surprise because Turkiye usually hits the headlines for its plunging currency and a zany monetary policy.

But it turns out that, if you take its macro-economic performance in 2020 and 2021, and the IMF’s forecasts for 2022 and 2023, Turkiye averages annual growth of 5.1 per cent — which beats everybody else for those four years.

According to the IMF’s data set for 30 highlighted countries, China is next-best to Turkiye with average growth in 2020-2023 put at 4.55 per cent, followed by another surprise: Egypt, with 4.3 per cent.

India comes fourth with 3.9 per cent, followed by (and you will really have difficulty swallowing this) the crisis-hit Pakistan, with 3.6 per cent.

With Bangladesh already an outstanding performer on the growth and some development parameters, it would seem that the Islamic world has produced quite a few winners.

For good measure, Saudi Arabia will be the fastest growing economy in 2022 (think oil prices).

The big question concerns China, which is almost certainly at an inflection point, given the poor demographic of a shrinking working-age population.

The IMF projects average Chinese growth this year and the next at under 4 per cent, which would be a multi-decade low.

The accumulated problems in the real estate and financial sectors may be beginning to affect macro-economic performance.

Also, a diplomatically hostile Western world makes continuation of export-led growth difficult as Chinese firms face crackdowns and roadblocks of one kind or other.

As for India’s record, it did poorly in the first pandemic year (fiscal 2020-2021), having already slowed sharply in the previous year.

But it achieved among the fastest recoveries subsequently.

And taking the IMF’s projections for the next two years, the economy is set to be the fastest-growing among the institution’s select list of 30 countries.

Average growth this year and the next is put at 6.8 per cent.

The IMF’s optimism is shared by many multilateral and private forecasters.

Some domestic analysts have gone so far as to project medium-term growth as high as 7-8 per cent. 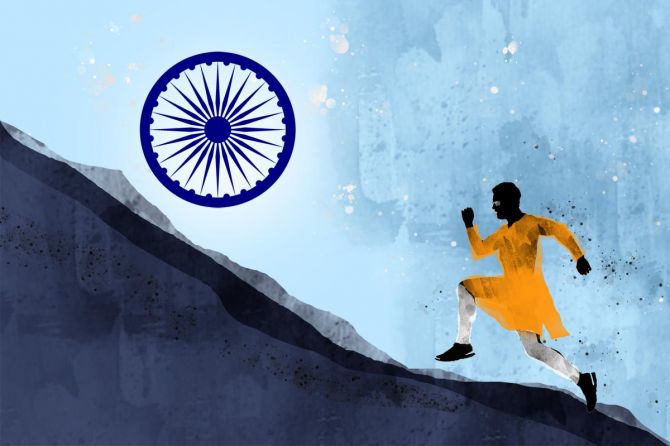 The way to avoid getting caught up in possible group-think is to question the assumptions.

There are only two five-year periods when India recorded rapid growth.

The first was in the fiscal years from 2003-2004 to 2007-2008, when the global economy was on steroids and India benefited from rapid export growth.

The second was 2014-2019, when there was a growth bonus in the form of falling and low oil prices.

Both periods were followed by sharp slowdowns, caused in the first case by a financial crisis and this time by the pandemic.

India’s growth in the last three financial years has averaged just 1.9 per cent.

It is natural, in a way, to project rapid growth from this low base.

Crucial to that would be the assumption that the economy has suffered no lasting damage from the pandemic, and further that the investment in the transport infrastructure and digitisation will deliver productivity growth.

That first assumption is open to question, given evidence of the impact on small and medium businesses and on employment, with more people switching to farming when the shift should be the other way.

Also, the global environment is less than hospitable, with possible stagflation in countries around the North Atlantic, a never-say-die virus, and, not least, military conflict with the attendant supply disruptions.

Equally real are three domestic constraints: Close to double-digit fiscal deficits (Centre and states together) in relation to GDP, a growing current account deficit, and high levels of public debt when interest rates are rising.

One should therefore tinge the optimism with some caution.