Cineworld, the world’s second-largest cinema chain, is in talks with landlords and film studios as it tries to save cash after it was forced to close all of its cinemas worldwide.

The company, which has 787 cinemas in 10 countries, said it was talking to its banks about its “ongoing liquidity requirements” and suspended dividends to shareholders as it tries to weather the coronavirus crisis.

Cineworld said it was halting all unnecessary spending as it made “every effort” to lessen the financial impact of the closures.

“This is a situation impossible to imagine a few months ago,” the London-listed company told investors on Tuesday. “This is a painful but necessary process as before the onslaught of the Covid-19 virus, we were excited and confident about the group’s future prospects.”

Executive directors, led by the chief executive Mooky Greidinger, will “defer” payment of their full salaries and bonuses for an unspecified amount of time “given the impact of Covid-19 on many of our employees”.

The company warned last month that in a worst-case scenario, total closure of its cinemas for three monthscould possibly lead to a breach of its covenants and an inability to pay its debts. 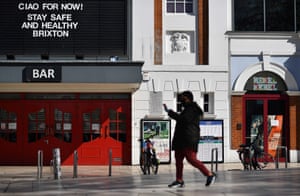 Cineworld angered staff when it immediately start laying off staff after closing its cinemas in the UK, which includes the Picturehouse chain, last month. After a public backlash the company subsequently moved to furlough staff under the government’s job retention scheme.

The company also made a thinly veiled swipe at the Hollywood studio Universal, which has decided to make expected blockbuster Trolls World Tour available on all digital and pay-TV platforms globally on 10 April, instead of delaying its launch for an exclusive release in cinemas later in the year to help operators recover.

“With very few exceptions, the good relationships we have built up over the years have been supportive and understanding of our efforts,” the company said.

Greidinger was more direct in comments to a trade magazine in the US, saying Universal’s decision was a “one-sided move against exhibition [in cinemas], and also a huge business mistake. You do not change the basic rules of the game … especially when your partner is in its worst situation.”

The company, the UK’s biggest operator, said it would continue to “monitor” the progress of its $2.1bn (£1.7bn) deal to buy Canada’s Cineplex. If Cineworld were to pull out of the deal it could face a break-fee of up to £28m.

Cineworld’s shares, which have hit a record low since the onset of the pandemic, were up 36% at 54p on Tuesday morning. The company has $3.5bn in debt, excluding leases.