New York (CNN Business)The only thing that climbed as high as gas prices earlier this year was the disapproval of President Joe Biden, as Americans blamed him for record prices at the pump. But Biden had relatively little control over the prices set primarily by global markets.

If Biden got too much blame for when the price of gasoline shot up to a record $5.02 for a gallon of regular by mid-June, he is now hoping he gets credit for the steady drop in gas prices to below $4. There have been 71 straight days of declining prices to $3.88 a gallon as of Wednesday according to AAA.
Biden did order the release of about 1 million barrels of oil a day from the nation’s Strategic Petroleum Reserve, or SPR. But that was responsible for maybe 15 cents of the $1.13 decline in price over the last 10 weeks, according to Andy Lipow, president of consultant Lipow Oil Associates.

“The biggest impact on gasoline prices is reduced consumption and also the fears of recession around the world,” he said.

Recessions can cause a huge drop in gasoline and oil prices, as people facing job loss and money worries will drive less, reducing demand for both gas and oil.

In 2008, the average gas price plunged 60% between a then-record price of $4.11 a gallon in July and the end of that year, as the financial markets meltdown sparked the Great Recession and massive job losses.

Recession risks not limited to US

But it’s not just threats of a US recession that are pushing down oil and gasoline prices. The US economy, with a strong job market, has a more robust economy than many other major oil consumers.
US oil and gasoline prices have also been helped by a rising dollar, which is up 12% versus the Euro since Russia’s invasion of Ukraine, and also up against other major and minor world currencies.
Since oil futures are priced in dollars, that has helped to limit the increase paid by US consumers, since their dollars are going farther. But it is driving up oil and gasoline prices even more around the globe since more of those currencies are needed to buy oil and gasoline in dollars.
“That means the fears of recession are that much greater in other countries,” said Lipow. And the more economies around the globe that fall into recession, the more that could reduce global demand.
But even if American consumers are enjoying gas prices down more than 20% from their peak, it’s not a particularly good idea for Biden to be taking too much credit for the decline, said Tom Kloza, global head of energy analysis for OPIS, which tracks prices for AAA.
“If they do that, it could be the the 2022 equivalent of ‘Mission Accomplished,'” said Kloza, referring to the banner hung up on an aircraft carrier behind then-President George W. Bush, shortly after US troops reached Baghdad following the US invasion of Iraq.
The event became widely mocked as the war continued to stretch on for years afterwards. Kloza said if Biden makes too much of the drop in oil prices, it could hurt him if prices start to rise again.
“There’s still a chance that come October or November, if these economies wobble and don’t fall into recession, we could see $120 a barrel crude prices once again,” he said. Current prices are now down close to $100 a barrel.
A hurricane hitting the US oil platforms and refineries along the Gulf Coast or a worsening of the war in Ukraine could also send prices higher. This weekend is the 17th anniversary of Hurricane Katrina, which caused a massive spike in gasoline prices nationwide.

Lipow said that US oil producers have made modest increases in production — of about a half-million barrels a day — to take advantage of the high crude oil prices. Biden has pushed oil companies to produce more oil, but so far that has had negligible impact on production, and thus on prices.
But if oil and gas prices have fallen in the last 10 weeks with little help from Biden, they rose in the four months before for reasons that were far beyond Biden’s control.
The major factor was Russia’s invasion of Ukraine and the sanctions that were put on Russia by western countries supporting Ukraine. While the US did not import much oil from Russia, the markets reacted to the impact that losing much of Russia’s exports had on global supply. 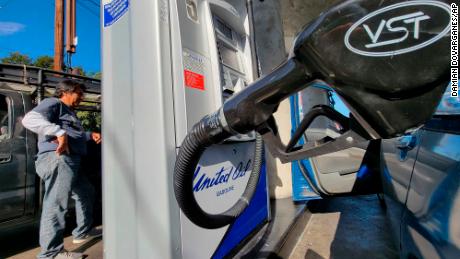 Prices were already going higher even without the invasion.
When oil prices crashed to briefly trade for less than $0 early in the pandemic, it prompted oil producing nations to slash production in an effort to support prices. They have been slow to add back production, as the global economy got back on track in 2021 and early this year, before the latest recession fears.
Despite the talk about the Biden administration policies hurting production, none of the steps taken since Biden took office, such as blocking the Keystone Pipeline or pausing new fracking contracts on federal lands, have affected current supplies of crude oil.

If if Biden had not taken those steps, any additional oil that might have been produced would not have been available yet.
“Keystone or fracking limits might have had an impact on prices in ’24, ’25 or ’26. But until then, they’re just a Republican talking point,” said Kloza.
Source: Read Full Article