Facebook, Inc. (FB) stock is trading higher by more than 7% in Thursday's pre-market after the social media giant met earnings per share (EPS) guidance of $1.71 and beat first quarter 2020 revenue estimates. Revenues rose 17.6% year over year to $17.74 billion, despite a steep decrease in March advertising receipts. The company noted that ad revenues had stabilized in the first three weeks of April and were approximately flat compared to the first quarter of 2019.

Daily average users (DAUs) increased 11% year over year to 1.73 billion, while monthly average users (MAUs) rose 10% to 2.6 billion. Even so, flat April ad revenues highlight continued weakness "across all of our user geographies," telling investors to watch second quarter headwinds that will hopefully ease in May and June. The company is addressing this challenge by cutting costs to maintain profitability, with 2020 spending set to drop from the range of $54 billion to $59 billion to the range of $52 billion to $56 billion.

Facebook stock is now trading above $200 for the first time since Feb. 26, less than 15 points below the all-time high at $224.20 posted on Jan. 29. It has also cleared resistance at the 200-day exponential moving average (EMA) near $187, which was broken at the start of the plunge. Accumulation readings have surged since March, but indicators remain well below prior peaks, lowering the odds for a breakout to new highs. Even so, constructive price action confirms that the uptrend that started in 2012 remains fully intact. 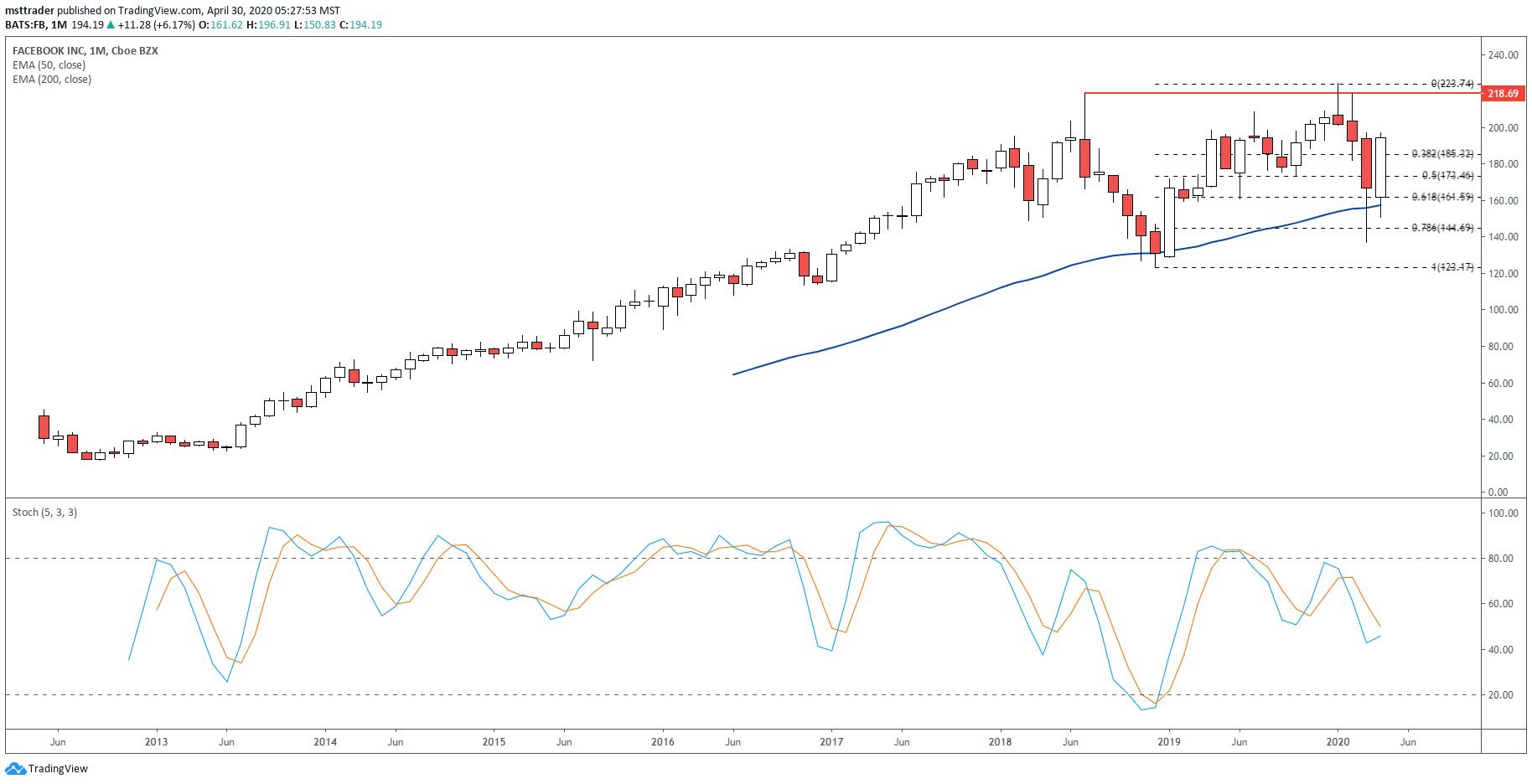 The company came public in the mid-$40s in 2012 and sold off immediately, hitting an all-time low at $17.55 a few months later. The subsequent uptick completed a round trip into the prior high in the third quarter of 2013, yielding a healthy breakout that attracted broad-based buying interest. The advance eased into a rising channel pattern in January 2014, revealing healthy institutional buying interest.

The stock exited the channel in September 2018, losing about 95 points in just five months before bottoming out at a two-year low in December. The 2019 bounce stalled mid-year within the massive July 2018 gap triggered by the Cambridge Analytica scandal, yielding sideways action into October, when bulls took control once again. The gap finally got filled in January 2020, at the same time the uptick completed a 100% retracement into the 2018 high.

The subsequent breakout failed after posting an all-time high at $224.20 on Jan. 29, trapping trend-following bulls in a 24-point downdraft. An uptick into mid-February stalled at a lower high, setting the stage for a vertical decline that relinquished 39% of the stock's value into March's 14-month low at $137.10. The bounce through April started at the .786 Fibonacci retracement level of the 2018 into 2020 uptrend, marking a high-odds turning point, and has unfolded at the same angle of attack as the prior downtick.

The monthly stochastic oscillator raises major doubts about the rally's durability, entering a sell cycle from the overbought zone in July 2019. An intermediate bull cycle failed in February 2020, while the indicator is now crossing the panel's midpoint. This zone often generates false buying signals, suggesting that resistance at the 2018 and 2020 highs will trigger a multi-week reversal in coming sessions. 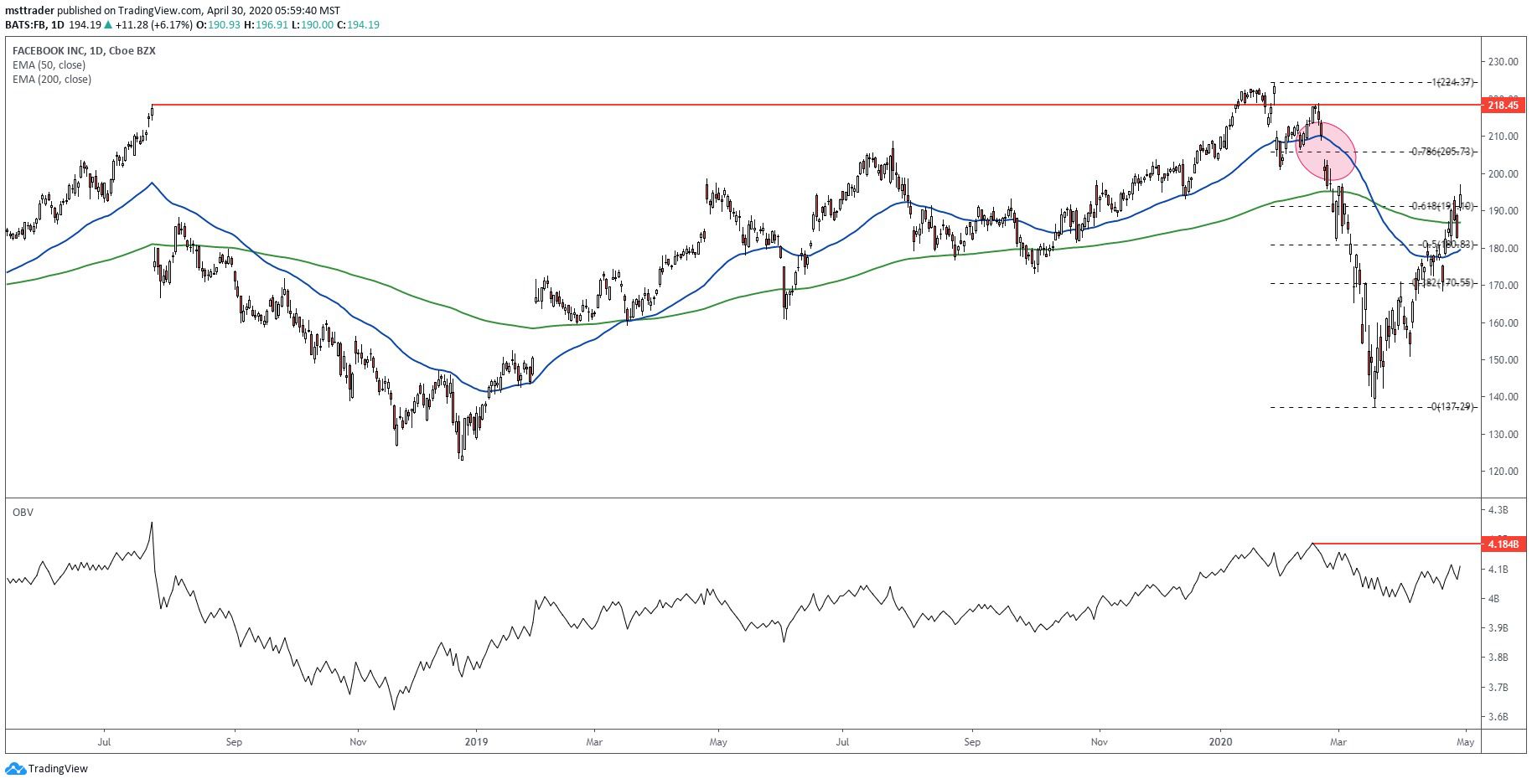 The post-news uptick is filling the Feb. 21 gap in Thursday's pre-market, with that price zone narrowly aligned at the .786 Fibonacci sell-off retracement level. Taken together, this is a perfect spot for bears to take control and trap new buyers. Even so, the on-balance volume (OBV) accumulation-distribution indicator shows healthy buying pressure since March, limiting downside risk to the 200-day EMA in the $180s. As a result, that level could offer a low-risk buying opportunity.

Facebook has reached resistance at the .786 retracement of the first quarter decline, marking a high-odds turning point after impressive April price action.

Disclosure: The author held no positions in the aforementioned securities at the time of publication.