George Acland from Great Britain ran a coffee plantation in Sri Lanka and set up India’s first jute mill in 1855. He raised capital and imported the machinery for the mill on the banks of the Hooghly in West Bengal.

His company wasn’t a great success, but his pioneering work paved the way for India to dominate the jute industry.

Foreign companies importing technology for their use often facilitate the development of indigenous industry.

How has their interest in India changed in recent times?

Registrations are up, but the number of active foreign companies in India has dropped.

There are fewer active foreign companies compared to five years ago, shows an analysis of data from the ministry of corporate affairs.

The Companies Act defines a foreign company as one incorporated outside India but having a place of business within the country.

Active foreign companies dropped by 1.5 per cent in the same period to 3,311 despite the new registrations.

While more companies have been registered, fewer of them are active (see chart 1).

Just two places, Maharashtra and Delhi, accounted for 53.5 per cent of the 516 foreign firms registered over the five years ending March 2022 (see chart 2). 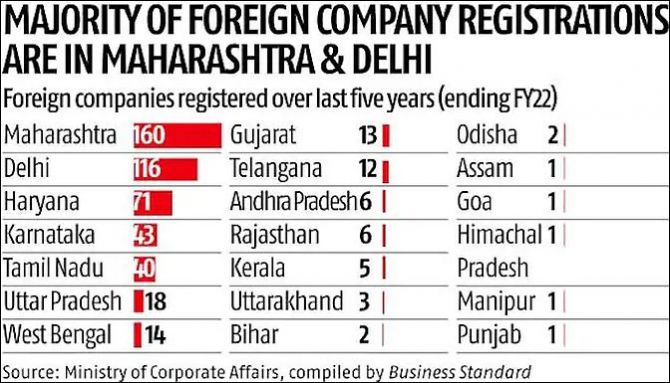 There are other signs of declining foreign interest in India. Automobile companies Harley Davidson, General Motors and Ford left the country.

Demand for Indian jute jumped during the Crimean war between Russia and other European powers in the 1850s.

The war is said to have affected Russian hemp exports and boosted Indian jute.

There are parallels today, amid a global debate to shift manufacturing away from China and Russia’s invasion of Ukraine.

India got foreign capital and technology for jute nearly two centuries ago.

Its aim to become a foreign investment destination again is a work under process.