(CNN)Stephen Reifenstein never imagined he’d find himself relying on the services of a food bank.

He and his wife Kristina live with their two young children in Orange County, California — one of the wealthiest areas in the nation. For nearly two decades, he worked in project control in the oil and energy sector. The job was comfortable, paying enough that the couple was recently able to purchase a home.
Then, as the story goes for so many people, the pandemic hit.

On April 3, Reifenstein found himself out of a job. The business that his wife had started a few months earlier was on hold. All the while, the mortgage payments, the car payments and the utility bills kept coming. The couple found themselves quickly blowing through their savings and decided they had to find a way to cut costs somewhere. 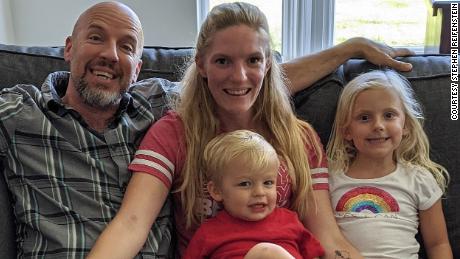 So Reifenstein signed up to volunteer at the Second Harvest Food Bank, and started taking some food home at the end of his shifts.

“You never really think things like this will be needed for you,” he said.
Reifenstein and his family are among millions of people who find themselves turning to food banks during this time of uncertainty, as unemployment rates reach record highs, the prospect of more federal relief remains uncertain and the pandemic rages on.
That influx of new recipients, along with disruptions in the supply chain and increasing food prices, have put the nation’s food banks under enormous strain.
“Food banks have been operating in this heightened disaster response mode since March,” said Zuani Villarreal, director of communication for Feeding America. “The big question is: How long can we sustain this?”
Leaders at food banks are taking a number of measures in anticipation of the potentially challenging months ahead. But as the US battles a third wave of the pandemic, a critical line of defense against hunger hangs in the balance.

The percentage of people without access to adequate food has doubled

Lines at food banks across the country have gotten longer since March — and many of the people in them haven’t needed assistance before.
About 10.5% of US households were food insecure — meaning that they had limited or uncertain access to adequate food — at some point in 2019, according to a report published by the US Department of Agriculture last month.
That number has more than doubled during the pandemic. On average, about 22.5% of households were food insecure each week from May 5 to July 21, according to an analysis by Northwestern University’s Institute for Policy Research. For Black and Hispanic households, the rates have been much higher. 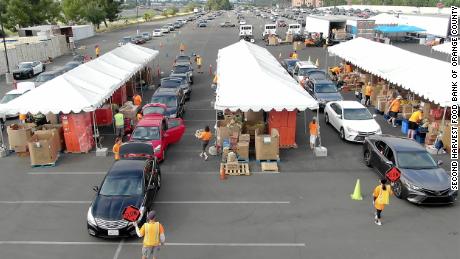 Second Harvest Food Bank of Orange County has seen the increase in demand firsthand — despite serving a region that people don’t often associate with hunger.
“We’re in one of the wealthiest counties in one of the wealthiest states in the wealthiest countries in the world, and we have pervasive food insecurity at our doorstep right now because of the crisis we find ourselves in,” CEO Harald Herrman said.
Before the pandemic, Herrmann said his organization was serving approximately 2.2 million pounds of food a month to about 249,000 residents. In August, he said they served more than double the food to more than double the residents.
“What’s really revealed itself is that there are so many Americans that are 3 to 5 paychecks away from needing help in some way or another,” he added.
Food Bank For New York City, the city’s largest hunger relief organization, is seeing the heightened need in the number of meals they’re handing out. 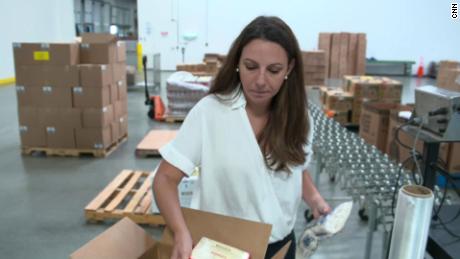 This time last year, the food bank would have served about 30 million meals, according to Janis Robinson, vice president of institutional giving and partnerships. This year so far, they’ve served about 50 million meals.
“That gives us a sense of the astronomical increase in support that has been needed within the five boroughs,” she said.
Economic relief measures and expanded benefits from the federal government have alleviated some of the burden on food banks, and some of the programs keeping families from going hungry have been extended through September 2021.
But things could get worse if Covid-19 cases continue to rise over the next few months. Families could have to shelter in place again, more businesses could be forced to shutter and food supply chains could face further disruptions.
Experts say more support is needed to address the challenges of hunger and economic insecurity — but a bipartisan deal for another round of relief is nowhere in sight.

Food banks are getting creative

To ensure that all the people who need food are taken care of and prepare for a potential surge, food banks are getting creative.
Food Bank For New York City is now storing more than 100 million pounds of food in its massive warehouse in the Bronx, up from about 70 million pounds in a normal year, Robinson said.
The organization also set up a program to help the food pantries and soup kitchens they partner with build their food supplies and expand their refrigeration and storage capacities. 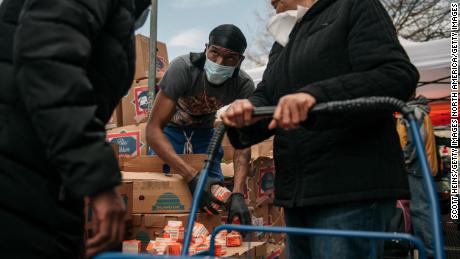 Because of those efforts, Robinson said the food bank is poised to have enough food to serve residents until about January or February 2021.
Community Food Bank of New Jersey, the largest non-profit organization fighting hunger and poverty in the state, is doubling the amount of food it typically keeps on hand.
Before the pandemic, Community Food Bank CEO Carlos Rodriguez said his organization mostly relied on food donations from grocery stores, farmers and manufacturers. But panic buying from consumers in the early days of the crisis left grocery store shelves empty, with little left over to donate to food banks. 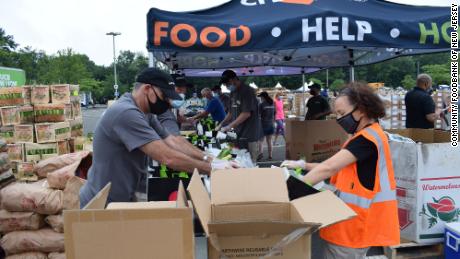 Product shortages aren’t as severe now as they were at the start of the pandemic, but grocery stores are still trying to keep up with increased demand. So Community Food Bank has largely relied on food purchased on its own.
“We’re looking to have on hand twice as much food, so as supply chain problems happen and/or a surge need happens and we have to dial it up, we can make those choices and get food to all communities that need it continuously,” Rodriguez said.

But a crucial lifeline could be coming to an end

The challenge food banks face in purchasing food, though, is that as the demand increases, so do the prices.
Fortunately, Community Food Bank and other food banks have also been able to bring in food from initiatives such as the US Department of Agriculture’s Farmers to Families Food Box program.
The program sourced fresh produce, dairy and meat products from distributors across the country, which were then boxed into portions for families and sent to food banks and other organizations to be distributed. 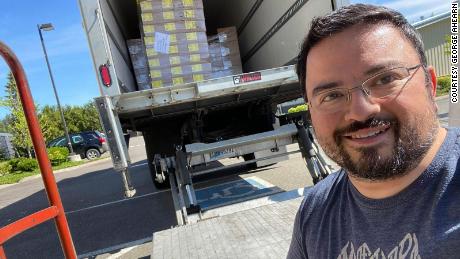 Food bank leaders say the boxes of fresh food have been a lifeline for families in need. But the latest phase of the program is set to expire in October 31, with no indication yet as to whether it will be extended.
“We’re concerned about that ending a little sooner than we were ready and having to purchase more food,” Rodriguez said.
The Farmers to Families food boxes, along with food grants from the state of Wisconsin, are largely why the Racine County Food Bank has so far been able to meet the needs of its community while building its inventory, said executive director Dan Taivalkoski.
Food has been coming in from producers and local residents, while expanded federal benefits kept many people from having to turn to the food bank.
But with Covid-19 cases on the rise in Wisconsin and uncertainty around coronavirus relief programs, Taivalkoski isn’t optimistic that things will stay this way.

“I’m a little nervous,” he said. “Now we’re seeing a surge in cases throughout Wisconsin and throughout the country, so it’s a little unnerving not knowing what the future’s going to bring.”
The pandemic revealed just how precarious the economic situations of families in the US are. And to help Americans make it through the crisis, food bank leaders say they need all the help they can get.
Source: Read Full Article