Three years of COVID-Leninism have done as much damage to China’s long-term growth prospects as an economic depression. If it is to have any hope of vaulting past the US to become the world’s paramount economic and regulatory power in our lifetimes it must achieve a decisive sorpasso before the late 2020s. This possibility is slipping further away with each whack-a-mole lockdown. Another such chance will not come for at least two generations.

By the middle of this decade the demographic dividend will have evaporated. Ageing will see the workforce shrink by seven million a year. The Lewis Point of economic development has been crossed and net urban migration from the countryside has dried up. Total fertility dropped to 1.15 and as low as 0.78 in Shanghai, which makes Japan look fecund. 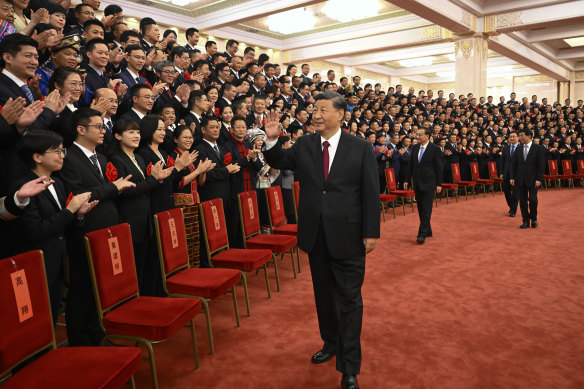 The tentative post-pandemic reopening of China under Xi’s 20-point plan has self-evidently spun out of control. Cases hit 10,000 in Chongqing on the weekend. A million people are currently in quarantine centres.

Capital Economics says 80 cities and surrounding regions accounting for half of China’s GDP and a 90 per cent of its export capacity are battling infections, a much wider spread than the original Omicron peak. It estimates that the Chinese economy is already in outright contraction under its proxy measure of output and will shrink by 1.0 per cent this year as a whole.

Xi will not hesitate to crush the “blank paper” revolt unfolding. Such a course is an absolute certainty after protesters began to target the Communist Party itself.

“Xi owns the policy of zero-COVID so there is no way he is going to back down. That would show incredible weakness,” said Ho-Fung Hung, author of The China Boom: Why China Will not Rule the World. “All his instincts are to mobilise the state surveillance machinery and double down ruthlessly. They are already rounding up people and pointing the finger at ‘hostile foreign forces’. I doubt there is any real threat to his power,” he said.

Few in the top circles of the Communist Party think that the massacre of students at Tiananmen Square in 1989 or the concurrent massacre of factory workers at Beijing’s Renmin Bridge were mistakes. The doctrine taught at the party’s ideological school is that it was a successful and necessary action.

“All that matters to Xi at this point is the survival of the regime. He knows that the economic boom is already over and China is not going to surpass the US,” he said.

The lesser political poison for the Party is to persevere with zero-COVID. It cannot risk a repeat of the scenes in Hong Kong after the authorities reopened abruptly in a society of endemic vaccine scepticism, with only 44 per cent of the over-80s fully jabbed.

The virus ripped through nursing homes. Dead bodies piled up in hospital wards mingled with live COVID patients because the mortuaries were full. The ratio of declared COVID deaths per million in Hong Kong so far has been 1,411, compared to 578 in Korea, 387 in Japan, and 301 in Singapore. 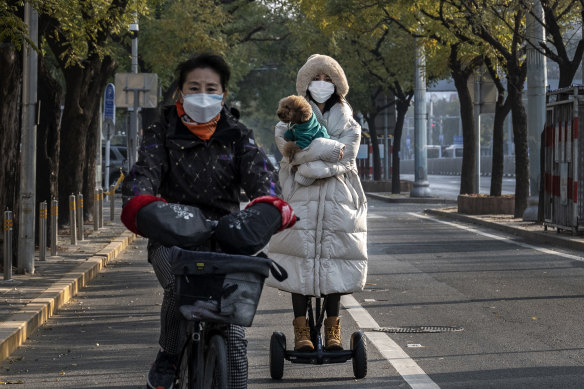 The economic damage of China’s COVID-zero policies will be felt for generations.Credit:Getty Images

The outcome in mainland China would be an order of magnitude worse, both in scale and intensity. China has three nurses per 1,000 inhabitants compared to eight in Hong Kong (most OECD states have around 12). It has half Hong Kong’s ratio of intensive care beds. It has the same levels of vaccination resistance among the elderly, and those jabbed have been limited to patriotic vaccines for the higher cause of national prestige.

To let rip would pose a greater risk to Party supremacy than the current protests, astounding as they are.

“Unless efforts to vaccinate the elderly and boost healthcare capacity ramp up very quickly, we will remain sceptical that China will abandon zero-COVID next year,” said Capital Economics.

Investors should assume that China will reimpose the sort of lockdowns seen at the outset of the pandemic in Wuhan (11 weeks) or earlier this year in Shanghai (eight weeks). The Wuhan episode led to a 20 per cent drop in national output over three months, although the authorities have since streamlined the process.

Those betting that China will become the world’s economic epicentre by the middle of this century have fundamentally misjudged the economic and political forces at work.

The immediate consequences of this aborted reopening cut two ways for the world economy. China will not provide a countercyclical buffer as America slows and Europe goes into recession, as markets had assumed just 10 days ago, and as it was able to do in 2009 with its post-Lehman credit blitz.

It will instead compound a synchronised downturn across all major blocs of the international economy. The Great Lockdown reinforces the Great Disinflation of 2023 and should alleviate the cost of living shock in Europe, ceteris paribus. Needless to say, Vladimir Putin may yet complicate the calculus with another twist of his energy war.

China is now trapped by its own COVID propaganda. It deployed the state media to deprecate western vaccines, entrenching vaccine scepticism among older Chinese suspicious of modern medicine.

It ridiculed the democracies for their chaotic response to the virus. It sacralised the total suppression of COVID as proof of China’s superior governing system and civilisation, and as irrefutable vindication of Communist Party rule. There is no easy retreat from this state hubris.

The overarching point is that China’s development model was already obsolete a decade ago. World Bank data shows the productivity growth rate has long since ceased to track the trajectories of Japan, Taiwan, and Korea as they became rich. It has instead collapsed to the level of mature economies but a quarter century too soon, before China has broken out of the middle income trap.

Those betting that China will become the world’s economic epicentre by the middle of this century have fundamentally misjudged the economic and political forces at work.

The disorderly democracies are more resilient and adaptable than they look. And the air is thin at the technological frontier for closed repressive regimes.

If there is one lesson to draw from the ghastly totalitarian spectacle of Xi’s zero-COVID it is that there is no mechanism to correct systemic error in an autocracy.

Zero-COVID is not quite the blind ideological madness of Mao’s Great Leap Forward, but it is running a close second.