Get all the latest news on coronavirus and more delivered daily to your inbox.  Sign up here.

Over the course of two months, Congress has thrown close to $3 trillion at stanching the economic blood-flow of the coronavirus pandemic — but with the job losses mounting, and the country mired in the worst downturn since the Great Depression, some lawmakers contend it’s not enough.

Even with the unprecedented injection of aid, the jobless rate in April hit 14.7 percent, the highest on record since the Great Depression. In the seven weeks since the nation's economy came to a near standstill, more than 33 million Americans have filed for first-time unemployment benefits, meaning the jobless rate will likely continue to climb in May.

On Tuesday, House Democrats unveiled a fifth stimulus package calling for more than $3 trillion in spending, with $1 trillion set aside for states and cities; so-called hazard pay for essential workers on the frontline of the virus outbreak; and another round of one-time $1,200 payments to individuals.

But Republicans are wary of another round of aid — the federal budget deficit could nearly quadruple this year, hitting $3.7 trillion, according to the Congressional Budget Office — with some suggesting they’d like to see how the existing $3 trillion trickles through the economy before shoveling more cash at the crisis.

"We just want to make sure that before we jump back in and spend another few trillion of taxpayers’ money that we do it carefully," Treasury Secretary Steven Mnuchin said during an interview on “Fox News Sunday.”

Here’s a guide to where the stimulus money already signed into law by President Trump is going:

At the beginning of March, Trump signed a bipartisan $8 billion deal to provide emergency funding to fight the outbreak of the virus. The bill included about $7.7 billion in discretionary spending to help vaccine development, research, equipment stockpiles and state and local health budgets.

Under the agreement, more than $2 billion would be allocated to the Centers for Disease Control and Prevention, and more than $3 billion would go toward a public health emergency fund and the National Institutes of Health Research. About $1.25 billion would be provided to help protect Americans living abroad.

In mid-March, lawmakers passed a bill to provide free testing for COVID-19, as well as extend paid sick and family leave; strengthen unemployment insurance; and increase food aid to alleviate the financial burden on some American families.

At the time, the government did not specify how much the legislation — known as the Families First Coronavirus Response Act — would cost. However, the Congressional Budget Office has estimated that it would add $192 billion to the federal deficit over the next decade.

The legislation created temporary coronavirus-related sick leave benefits paid by employers with fewer than 500 workers. Workers with the virus would receive their full wages if they were self-quarantining, or two-thirds of their pay when caring for a sick family member. It also provided $1.3 billion in emergency food funding. 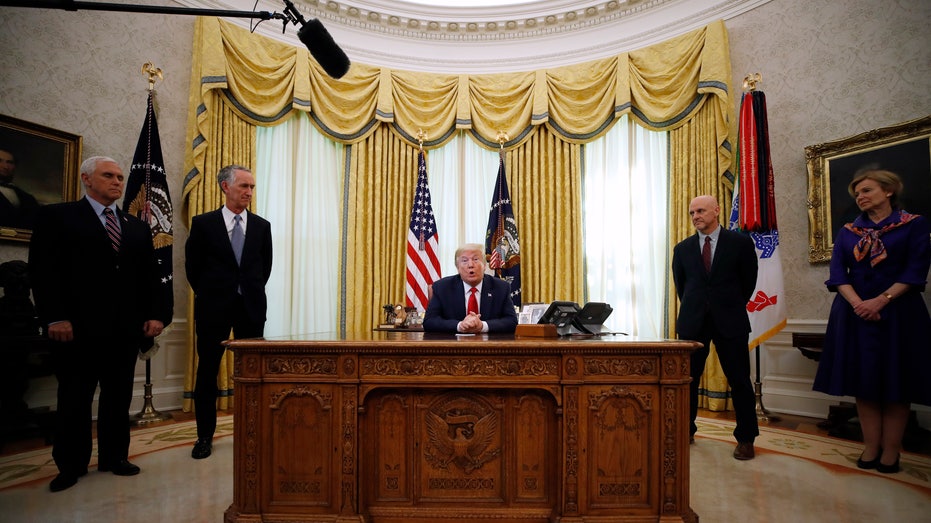 The biggest relief package ever passed in the U.S., the CARES Act shoveled cash toward all parts of the U.S. economy to counter the paralysis on activity, a result of stay-at-home measures adopted to mitigate the spread of the virus.

Most notably, the bill expanded unemployment benefits by $600 per week through July 31; sent a one-time payment of up to $1,200 for Americans earning less than $99,000; and established the Paycheck Protection Program.

Here’s a rough breakdown of the funding in the more than $2 trillion bill:

The most recent bill signed by Trump in April to blunt the economic pain from the virus included $310 billion to replenish the Paycheck Protection Program (which exhausted its initial $349 billion in funding within 13 days); $60 billion for the Small Business Administration disaster assistance loans and grants; $75 billion for hospitals struggling to cover costs; and $25 billion to ramp up testing efforts.