An unwritten rule in the economic debate is that you can say whatever you like about the failures of governments – Labor or Liberal; federal or state – but you must never, ever criticise the performance of business. Maybe that’s one reason we’re getting so little productivity improvement these days.

One reason it’s unwise to criticise big business is that it’s got a lot of power and money. It can well defend itself but, in any case, but there’s never any shortage of experts happy to fly to its defence, in hope of a reward. 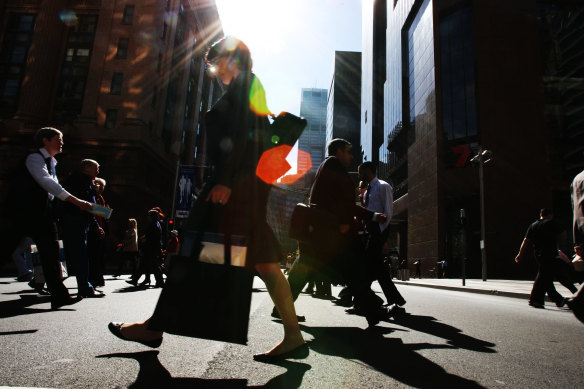 The role of big business is often overlooked in discussions about poor productivity.Credit:Peter Braig

But the other reason is the pro-business bias built into the standard demand-and-supply, “neoclassical” model burnt into the brains of economists. It rests on the assumption that market economies are self-correcting – “equilibrating” – and so work best when you follow the maxim “laissez-faire” – leave things alone.

So if markets don’t seem to be going well, the likeliest explanation is that intervention by governments has stuffed them up. Business people always respond rationally to the incentives that governments create, so if what business is doing isn’t helpful, it must be the government’s fault.

In theory, economists know about the possibility of “market failure”, but many believe that, in practice, such failures are rare, or of little consequence.

All this explains why almost all discussion of our poor productivity performance assumes it must be something the government’s doing wrong, which needs “reforming”. You’ll see this mentality on display at next week’s jobs and skills summit.

Which is surprising when you remember that, for the most part, productivity improvement – producing more outputs of goods and services from the same or fewer inputs of raw materials, labour and physical capital – occurs inside the premises of businesses, big or small.

Fortunately, one person who understands this is the new assistant treasurer, Dr Andrew Leigh, a former economics professor, who this week used the Fred Gruen lecture at the Australian National University to outline recent Treasury research on the “dynamism” of Australian businesses – how good they are at improving their performance over time.

The news is not encouraging. One indicator of dynamism is job mobility. When workers switch from low-productivity to high-productivity firms, they earn a higher wage and make the economy more efficient. 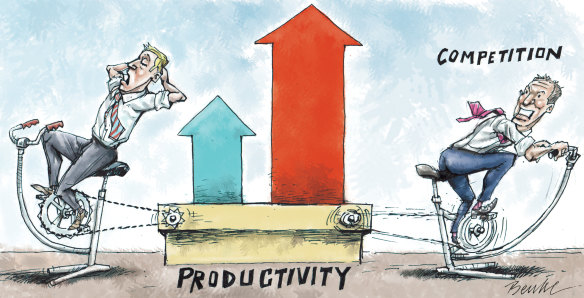 Over the same period, the number of old companies closing fell from 10 per cent to 8 per cent. So our firms are living longer and getting older.

The neoclassical model assumes a high degree of competition between firms. It’s the pressure from competition that encourages firms to improve the quality of their products and offer an attractive price. It spurs firms to develop new products.

Competition encourages firms to think of new ways to produce their products, run their businesses and use their staff more effectively, Leigh says.

“In competitive industries, companies are forced to ask themselves what they need to do to win market share from their rivals. That might lead to more research and development, the importation of good ideas from overseas, or adopting clever approaches from other industries.

“Customers benefit from this, but so too does the whole economy. Competition creates the incentive for companies to boost productivity,” he says.

As Leigh notes, the opposite to competition, monopoly, is far less attractive.

“Monopolists tend to charge higher prices and offer worse products and services. They might opt to cut back on research, preferring to invest in ‘moats’ to keep the competition out.

“If they have plenty of cash on hand, they might figure that, if a rival does emerge, they can simply buy them out and maintain their market dominance. Monopoly [economic] rents lead to higher profits – and higher prices.”

Lax regulation of mergers and takeovers has allowed too many of our big businesses to get fat and lazy, even while raising their prices and profits. But don’t tell anyone I said so.

One indicator of the degree of “market power” – aka pricing power – is how much of a market is controlled by a few big firms. At the start of this century, the market share of the largest four firms in an industry averaged 41 per cent. By 2018-19, it had risen to 43 per cent. So across the economy, from baby food to beer, the top four firms hold a high and growing share of the market.

But the strongest sign of lack of competition are the size of a company’s “mark-up” – the price it charges for its product, relative to its marginal cost of production. In the textbook, these mark-ups are wafer thin.

Treasury estimates that the average mark-up increased by about 6 per cent over the 13 years to 2016-17. This fits with the trend in other rich economies. And the increase in mark-ups has occurred across entire industries, not just the market leaders.

It seems that rising market power has reduced the rate at which labour flows to its most productive use, which in turn has lowered the rate of growth in the productivity of labour by 0.1 percentage points a year, according to Leigh’s rough calculations.

If so, this would explain about a fifth of the slowdown in productivity improvement since 2012. Lax regulation of mergers and takeovers has allowed too many of our big businesses to get fat and lazy, even while raising their prices and profits. But don’t tell anyone I said so.

Ross Gittins is the economics editor.