A key part of the economic response to the pandemic was to rev up the housing industry. It’s boomed and now it’s busting. What’s been achieved? Mainly, a big, self-inflicted addition to our inflation problem.

That, and a lot of recent first-home buyers now getting their fingers burnt. Well done, guys.

It’s not a crime to be wise after the event. Indeed, it’s a crime not to be. As we all know, you learn more from your mistakes than your successes.

We have much to learn from our mishandling of the economic aspects of the pandemic. Because we had no experience of pandemics, our mistake was to treat the lockdowns as though they were just another recession. Turned out they’re very different.

Because downturns in home building and house prices often lead the economy into recession, then a recovery in home building leads it out, the managers of the macroeconomy assumed it would be the same this time. 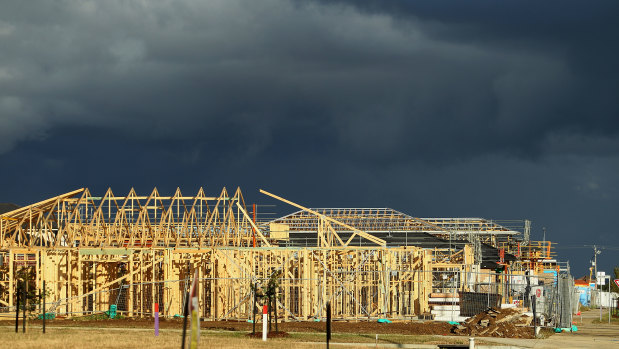 The building sector has faced compounding problems when it comes to supply of materials and labour.Credit:Pat Scala

But the doozy was the Reserve Bank’s decisions to cut the official interest rate from 0.75 per cent to 0.1 per cent, and then cut the base rate for 3- and 5-year fixed-rate mortgages.

By the end of last year, according to the Bureau of Statistics, the median house price in Sydney and Melbourne had jumped by more than 40 per cent. In the following quarter, it fell by 7 per cent in Sydney and 10 per cent in Melbourne. By all accounts, it has a lot further to fall.

Turning to building activity, we’ve seen a surge in the number of new private houses commenced per quarter, which jumped by two-thirds over the nine months to June 2021. Then it crashed over the following nine months, to be up only 14 per cent on where it was before the pandemic.

It’s no surprise commencements peaked in June 2021. Applications for the HomeBuilder grant closed 14 days into the quarter.

But to commence building a house is not necessarily to complete it a few months later. The real value of work done on new private houses per quarter rose by just 15 per cent over the nine months to June 2021. Nine months later, it was up 12 per cent on where it was before the pandemic.

For the most part, the home building industry kept working through the two big lockdowns. It seems that, between them, the nation’s macro managers took an industry that was plugging along well enough, revved it up enormously, but didn’t get it building all that many more houses, nor employing many more workers.

Perhaps it soon hit supply constraints – shortages of building materials and suitable labour. I don’t know if the industry was lobbying governments privately for special assistance, or whether it didn’t have to. Maybe pollies, federal and state, just instinctively rushed to its aid.

But I wonder if the builders didn’t particularly want to get much bigger. There are few industries more cyclical than home building. Builders are used to building activity going up and down and prices doing the same.

When demand is weak, they try to keep their team of workers and subbies together by cutting their prices, maybe even to below cost. Then, when demand is strong, they make up for it by charging all the market will bear.

It’s the height of neoclassical naivety to think it never crosses the mind of a “firm” existing outside the pages of a textbook that manipulating supply might be a profitable idea.

So maybe the builders found the thought of increasing their prices more attractive than the thought of building a bigger business to accommodate a temporary, policy-caused surge in demand.

They may have taken a lesson from those property developers with large holdings of undeveloped land on the fringes of big cities. Dr Cameron Murray, a research fellow in the Henry Halloran Trust at Sydney University, has demonstrated that the private land-bankers limit the regular release of land for development in a way that ensures the market’s never flooded and prices just keep rising.

So, back to our inflation problem. Whenever people say the recent huge surge in prices is caused largely by overseas disruptions to supply, which can’t be influenced by anything we do, and will eventually go away, the econocrats always reply that some price rises are the consequence of strong domestic demand.

That’s true. As I wrote last week, it seems clear many of our businesses – big and small – have used the cover of the big rises in the cost of their imported inputs to add a bit for luck as they pass them on to consumers.

But I saved for today the great sore thumb of excess demand adding to the price surge: the price of building a new home (excluding the cost of the land) or major renovations. This accounted for almost a third of the rise in the consumer price index in the June quarter, and jumped by more than 20 per cent over the year to June.

The price of newly built homes has a huge weight of almost 9 per cent in the CPI’s basket of goods and services, making it the highest-weighted single item in the basket. This implies that new house costs have added almost 2 percentage points of the total rise of 6.1 per cent.

When the econocrats worry about the domestic contribution to the price surge, they never admit how much of that problem has been caused by their own mishandling of the pandemic.

Indeed, when people argued that the main thing further cutting interest rates would achieve would be to increase house prices, the Reserve was unrepentant, arguing that raising house prices and demand for housing was one of the main “channels” through which lower rates lead to increased demand.

But the crazy thing is, this strange way of using the cost of a new dwelling to measure the cost of housing for home-buyers – which, I seem to recall, was introduced in 1998 after pressure from the Reserve – exaggerates the true cost for people with mortgages, especially at times like these.

Few people ever buy a new dwelling and, even if they do, rarely pay for it in cash rather borrowing the cost. This is one reason the bureau doesn’t regard the CPI as a good measure of the cost of living, but does publish separate living-cost indexes for certain types of households.

Ben Phillips, of the Centre for Economic Policy Research at the Australian National University, has used the bureau’s living-cost indexes to calculate that about 80 per cent of households had a living cost increase below the CPI’s rise of 6.1 per cent. The median (typical) increase over the past year was 4.7 per cent.

What trouble the econocrats get us into when they use housing as a macro managers’ plaything.

Ross Gittins is the economics editor.