Airfares have soared since international borders re-opened on the back of increased demand for leisure travel combined with staff shortages at airlines and rising jet fuel prices.

Data from travel website Kayak show the cost of an average return economy international flight from any airport in Australia to an overseas destination – searched between late July and early August for trips in the final four months of this year – hit $1720.

That is up almost 60 per cent on the same travel and search period in 2019, before the pandemic hit. 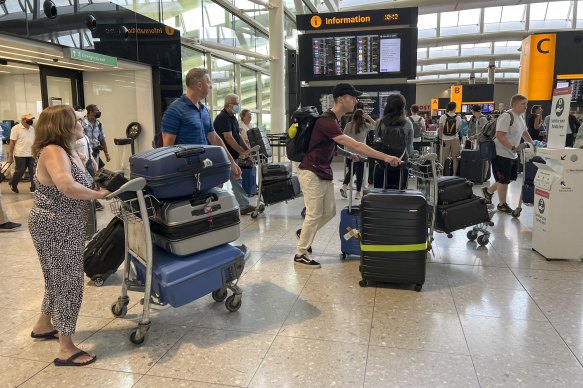 A return economy airfare to London cost $2487, up 63 per cent on the corresponding period in 2019, and the biggest rise among the destinations popular with Australians.

The next-largest increase was a return economy ticket to Auckland, which cost $736, an increase of 53 per cent, followed by New York which, at $2421, was 46 per cent higher.

The smallest increase was to Denpasar in Bali, Indonesia, where a return economy fare cost $821, up 25 per cent.

A survey by Finder asking respondents whether they plan to travel internationally in the next 12 months found 28 per cent want to do so, up from 15 per cent in February, but still less than the 39 per cent reached in a similar survey before the pandemic.

Here are some top tips to help you obtain the cheapest fares available:

The dates and times you fly can help you save money. In general, travelling on a Tuesday, Wednesday or Thursday can be cheaper than at other times of the week, Carmichael says.

“Kayak search data indicates that October is the most affordable month to book a return international flight for the end of the year,” Carmichael says.

Angus Kidman, Finder’s editor-at-large, says those who can afford to wait longer than the end of the year before travelling are likely to pay less, particularly those who are flexible with their dates and can avoid travel during school holidays.

He says it is good idea to set up a price alerts provided by search engines and airlines, so you are notified of fare changes.

Kidman says while search engines can be a good way to find competitively priced flights, you should first understand the terms and conditions attached to them.

He says that booking directly with an airline, or though a travel agent, could make it easier if anything goes wrong, such as dates needing to be changed.

Refund horror stories experienced by many travellers who booked flights and accommodation that had to be cancelled because of closing of international borders during the pandemic are still likely to be raw for many.

Consumer advocate Choice said last year, after most of the “cancellation chaos” suffered had passed, that travel businesses had improved their flexibility on cancellations – and made it easier to obtain refunds.

However, Choice insists it is still important for travellers to closely check the terms and conditions on their bookings before any type of holiday.

Travel in North Asia is lagging that to the Europe and the United States, with China’s borders – including Hong Kong – still requiring periods of quarantine. Most tourism travellers remain unable to enter Japan.

Flight Centre chief executive Graham Turner has said he expects airline capacity to further improve throughout the year, which could mean airfares start to normalise.

It is not only higher costs for flights that travellers face. Major disruptions continue, with long queues at airports, flight delays and cancellations, and lost baggage.

Australian Federation of Travel Agents chief executive Dean Long said it could take until the end of the year to address the root causes of the problems in the aviation industry, including a shortage of cabin crews. Many were furloughed or left the industry during the pandemic.

Choice says as travel does not always go as planned, obtaining travel insurance is important. Those without insurance leave themselves financially exposed if something goes wrong.

Several travel insurers now offer limited cover for COVID-19, but they vary, Choice says. Check what you are covered for before you buy.

Most Viewed in Money