Save articles for later

Add articles to your saved list and come back to them any time.

'We built the greatest economy in the history of the world, and now we are doing it again," Donald Trump boasted to supporters in the swing state of Michigan on the campaign trail.

The US president has been touting his economic record and insisting he can lead America to boom years once again following the pandemic. 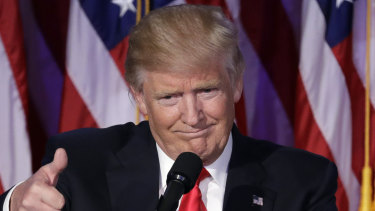 Polls show that voters have been losing confidence in Donald Trump’s handling of the economy.Credit:AP

But voters are becoming less confident in Trump's handling of the economy with one poll recently suggesting that Joe Biden was trusted more following the huge COVID recession and surge in unemployment.

From trade wars to tax cuts, how has the US economy fared under the president?

Trump claimed he could boost annual GDP growth to "4 per cent, 5 per cent or even 6 per cent" but failed to reach his lofty ambitions, despite the US economy largely defying the global slowdown before the pandemic.

The president's corporate tax cuts in 2017 were a huge stimulus jolt for the American economy but the trade war became a headwind, triggering an industrial recession and slowing global growth, particularly in the eurozone and China. Many voters will excuse the president for the huge 31 per cent annualised plunge in GDP suffered during the pandemic-hit second quarter of 2020, but Trump never achieved the 4 per cent growth he promised.

Growth was only marginally quicker in his first three years prior to COVID-19 than Barack Obama's final three years in the Oval Office, with the longest economic expansion in US history ending on his watch.

A key pledge of the president was to revive US manufacturing and bring back jobs offshored to the likes of China and Mexico.

"Made in America" has endured a decades-long decline and Trump struck a chord with voters in the former manufacturing hubs and swing states in the "Rust Belt", such as Michigan, Wisconsin and Pennsylvania. The pandemic wiped out a decade of jobs growth in factories but the president's record in manufacturing before COVID-19 was mixed. 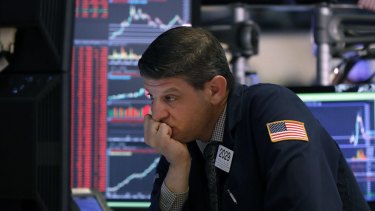 The stockmarket has had a rollercoaster four years under Trump, soaring to record highs and then collapsing into the fastest bear market in history after COVID-19 struck.Credit:AP

The Economic Policy Institute estimates that employment gains were largely on par with Trump's predecessor Obama, while factories have continued to close despite his efforts to pressure firms to bring back plants. Meanwhile, Biden has also made reinvigorating American manufacturing a key policy pledge but, like Trump, he will be trying to hold back the tide as automation and fierce overseas competition hurt factories.

Closing the trade deficit with China?

Slashing the trade deficit with China and the trade war have been a key vote winner for Trump in former industrial hubs. He can claim victory in reducing the gap between imports and exports to China, suggesting that the tariffs slapped on goods worth hundreds of billions of dollars have worked. But analysts warn that does not tell the full story.

The overall trade balance has been largely unchanged, with the US now importing more from the EU and Mexico for example. There is growing evidence of trans-shipment to get around higher US tariffs, meaning Chinese firms avoided costs on their products by sending them via another country. "Trade policy uncertainty has given way to larger concerns in 2020, but the US elections could bring them back," says Joanna Konings, economist at ING. "If president Trump is re-elected, new tariff increases, and new trade wars, are likely."

American workers were enjoying the lowest unemployment rate in 50 years before the pandemic turned the jobs boom to bust.

The lack of a furlough scheme in the US caused unemployment to rocket to its highest level since the Great Depression, with Trump opting to boost jobless benefits instead.

However, unemployment has fallen rapidly since the peak earlier this year, while furlough schemes may have only delayed job losses and kept workers in suspended animation in Europe.

After surging to 15 per cent in April, the US unemployment rate had dropped to 7.9 per cent in September – still more than double the levels seen before the COVID-19 pandemic.

Unemployment is mixed across the key swing states, with Pennsylvania, Michigan and Ohio suffering slightly higher joblessness than the national average.

However, the improvement in the labour market has slowed markedly in recent months, with only a small drop in unemployment seen between August and September.

Both candidates have made job creation a key part of their campaign but economists expect Biden to boost employment more than the president.

The stockmarket has had a rollercoaster four years under Trump, soaring to record highs and then collapsing into the fastest bear market in history after COVID-19 struck.

The S&P 500, New York's major stock index, has gained 55 per cent since his shock victory in 2016, with the president's tax cuts and help from looser monetary policy at the US central bank powering shares higher.

The president appears to no longer be the stockmarket darling, however. Analysts on Wall Street have argued that US markets have positioned themselves for a "blue wave" in recent weeks, as Biden has edged towards victory.

Investors have also latched on to hopes that the Democrats will use a huge stimulus to bolster the US economy and be less combative on trade policy.

Jussi Hiljanen, a strategist at SEB, explains that a "blue sweep", where the Democrats control the presidency, House of Representatives and the Senate, "would provide least resistance to a large-scale fiscal stimulus, which would be more positive for stocks".

Hiljanen adds: "A divided Congress would make any agreements on a large-scale stimulus more difficult and as such be less positive for risky assets."