Arguments between parents and children about screen time and online gaming are set to escalate with UK schools closed for the foreseeable future.

Concern was already growing among parents and children’s charities about the increasing monetisation of popular computer, console and video games. Almost half of parents of children aged 12 to 15 who play online games, such as Fortnite, Fifa and Minecraft, are worried about the pressure on children to make in-game purchases (up from four in 10 parents a year ago). This is according to Ofcom’s adults’ media use and attitudes report last month.

There has been an explosion of in-game purchasing over the past few years. The online gaming market, which is worth around £6bn in the UK, centres on games that players download, meaning the software can be updated at any time – and new content added during gameplay – at extra cost (known as “micro-transactions”). The games and apps are linked to the customer’s (parent’s) bank account. Even supposedly “free” apps and downloaded games have incentives for players to make in-game purchases.

But the danger is that children can easily notch up a big bill on a parent’s debit or credit card – in some cases without their knowledge. It can be difficult, if not impossible, to claim back the cash and there is no arbitrator or regulator for complaints.

But who is at fault? Gaming companies point to the fact there are a wide range of parental and technological controls to block unauthorised transactions. Yet an NSPCC survey last year found just one in five parents use them.

The Association for UK Interactive Entertainment (Ukie), which represents the industry, launched its Get Smart About Play campaign in January this year after concerns were raised about the number of parents failing to use parental controls on internet-connected devices.

“Games companies do not want children racking up bills – especially without parental permission,” Ukie says. ‘The aim of our campaign is to inform parents of the parental controls available and give guidance on how to use them, and also help them have the common-sense conversations with their children about games.”

But Justine Roberts, founder of the parenting website Mumsnet, says many parents will continue to fall foul of micro-transactions. She says: “Parents know game and app developers are not altruistic; it is often made very easy for children to get sucked into games and then spend a fortune on in-game currencies, such as ‘coins’, ‘berries’ or ‘doughnuts.’”

The social enterprise ParentZone, which provides support and information to parents, children and schools about safe internet use, has called for clearer signposting.

It found three-quarters of children felt online video games tried to make them pay out as much as possible and about half said games were only fun when they spent money.

Its “Rip-Off Games” report highlighted so-called “loot boxes” as an area of big concern. Sometimes known as crates, bundles, packs or cartons) they are offered for players to buy during an online game but often the player does not know what they contain before they buy them – fuelling concerns that they are akin to gambling. There is peer pressure, too, says ParentZone, when several players are in the same game, and children feel the need to purchase the loot to “fit in” and “measure up”. It wants the government to commission further research into the overlap between gaming and gambling. 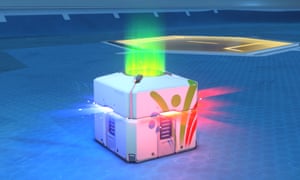 While Google, Microsoft, Nintendo and Sony have agreed to provide the odds of receiving in-game items from “loot boxes” in all future releases, and Apple has done so since 2017, they remain a lucrative area for the industry – worth about £700m in the UK each year.

Research by the Children’s Commissioner, the public body to protect children, echoes the concerns raised by ParentZone. While it found some positives to gaming, including socialising with friends online and learning new skills, it also found bullying was a problem as well as the pressure to spend.

Simone Vibert, senior public affairs and policy analyst at the Children’s Commissioner, says: “We would like to see a cap placed on in-game spending. We are also calling on the government to look at ‘loot boxes’ as we feel they should fall under the definition of ‘gambling.’”

Juliet Jackson,* 48, a charity worker, had a shock three years ago when her son Noah* (then aged 11) ran up a £1,200 bill on her debit card on the family’s iPad. It was only when Juliet had her card declined in a restaurant and she checked thatshe realised the money had been emptied over a two-week period.

“I felt sick,” says Juliet, who lives with her husband and two teenage sons in south-east London. “Noah had been playing the Harry Potter game and Boom Beach on our iPad, which he was allowed to do. But the iPad account is linked to my bank account. It was password protected so I thought it was safe, but Noah had watched me, without me realising, and worked out the password. He had been buying coin and ‘power bundles’ at £79.99 a time, over and over again.”

Juliet says she accepted it was her fault and was resigned to taking the financial hit. But she contacted Apple, which was sympathetic.

“It could see it was unusual spending for my account and agreed to refund in full. But I was not expecting it,” says Juliet. “Noah was mortifiedand very remorseful. It has been a good learning process for the family and we expect the boys to be open with us. We have a PlayStation and the boys have their own phones, but I have alerts set up so I get a message if they try to spend on the account. In any case, Noah always asks me now!”

Ukie says it encourages game developers and platforms to give a refund where it is clear a purchase was made without parental permission. But many parents will not so it pays to discuss boundaries and rules from the outset and use parental tech controls (see below).

Pete Lewin, a lawyer with Purewal & Partners, which offers legal advice to the tech and gaming industry, says: “Responsibility lies on all sides to ensure children are gaming safely. Developers have worked hard to put strong parental controls and tools in place but there is an element on parents to engage, get the right information and use the necessary controls.”

*names have been changed.

How to stay safe

• Talk to your children about safe and sensible gaming and internet use.

• Check the age rating of a game, research how it works, the content and the potential for in-game spending before downloading.

• Set clear boundaries on screen time and explain the reasons. Help children learn how to protect themselves. Remind them not to share personal information and keep “gaming friends” in the game only and not add to social networks.

• Do not disclose passcodes or passwords to children if they are using your devices, such as your phone or tablet.

• Set up the maximum parental controls on your phone, tablets and games consoles. Information should be available online and from your phone, tablet or console provider. For example, Apple offers its “Family Sharing” and “Ask to Buy” tools – which mean parents get an alert if a child asks to make a purchase. Turn on “Screen Time” in settings to disable in-app purchases. To set up family settings on an Xbox you will need to open a child account and link it to the parent’s Microsoft account. They will then have features to control purchases (Ask a Parent), screen time limits and content filters.