Accused fraudster Bill Papas has reportedly told Greek sporting authorities he still owns the Xanthi soccer club, appearing to contradict evidence he has given to the Federal Court that he sold his stake in the company that owns the club.

According to Greek sporting publication Thraki Sports, Mr Papas was called to a meeting with Greece’s Committee for Professional Sports on Monday to discuss his ownership of Xanthi following a complaint from Westpac. 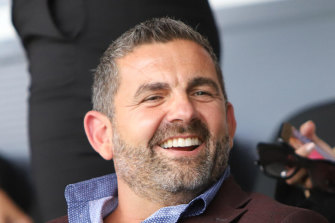 Bill Papas remains in Greece while liquidators have sold his Rozelle home.Credit:Xanthi

Westpac and two other banks have accused Mr Papas and his company Forum Finance of orchestrating a $500 million fraud on the banks by forging the signatures of executives at the banks’ blue-chip clients. Mr Papas fled to Greece ahead of the allegations being made public.

The Federal Court has frozen Mr Papas’s assets as the banks look to recoup their allegedly missing funds including millions poured into the Xanthi club, which the banks allege was the proceeds of fraud. The colourful soccer identity is already subject to an arrest warrant for allegedly breaching the freezing orders over transfers from his share trading account, as revealed by The Age and Sydney Morning Herald.

Last year, Mr Papas said in an affidavit filed to the Federal Court that outlined his assets that he no longer owned any shares in the company, Mazcon, that in turn owned Xanthi Football Club. Westpac has claimed in court documents that Greek business records show Mr Papas remains a 99 per cent owner of the club.

But late on Monday, Thraki Sports reported that Mr Papas had told Greek authorities he remained the owner of Mazcon and thus Xanthi. According to the publication, Mr Papas told the authorities that statements he had made in a civil matter in a foreign country did not mean the statements were true.

A representative from Westpac’s legal team in Greece attended the meeting with Greek authorities. Mr Papas’ company Mazcon, the owner of Xanthi, received $16.5 million in fraudulent funds, according to court documents filed in the Australian civil matter. Xanthi has paid up capital of $15 million and also owns $3.8 million in real estate.

The hunt for Mr Papas’ local and international assets has intensified in recent months as liquidators from McGrathNicol have been hard at work recouping the funds by selling the assets of Forum Finance and several other companies associated with Mr Papas.

The Age and Sydney Morning Herald revealed this week that the liquidators from McGrathNicol had sold a home owned by Mr Papas and his business partner Vince Tesoriero in Rozelle for $4.4 million.

Agents have also been hired to sell Mr Papas’s luxury waterfront retreats on the NSW Central Coast, with the Wagstaffe properties set to hit the market with record-setting price expectations of $12 million and $9 million each.