Earlier this week China’s corruption watchdog launched an investigation into 25 of the country’s biggest financial institutions and their regulators. On past experience that could have convulsive consequences. 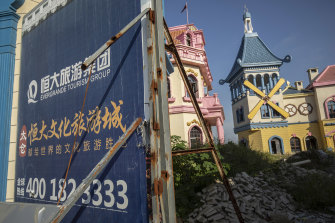 While Evergrande is by far the most prominent of the Chinese developers in trouble and that are unable to meet interest payments on their debts, the list of companies in similar straits is lengthening almost on a daily basis.Credit:Bloomberg

While presented as an anti-corruption investigation and targeted at Communist Party members within the organisations’ leadership – the inspections will “thoroughly search for any political deviations” – it would seem that it is directed at looking at the relationships between the institutions and regulators and the private companies they deal with or regulate.

The backdrop, of course, is the cascading wave of defaults occurring within China’s key property sector; a sector that accounts for about 30 per cent of China’s GDP and represents by far the largest sectoral exposure of its banking system. Nearly 30 per cent of the banks’ loans and, on some estimates, more than 40 per cent of their overall exposures, are to the real estate sector.

While Evergrande, the world’s most indebted property company with more than $US300 billion ($409 billion) of liabilities, is by far the most prominent of the Chinese developers in trouble and that are unable to meet interest payments on their debts, the list of companies in similar straits is lengthening almost on a daily basis.

Huarong, one of the country’s four bad debts managers – established to manage the mountains of distressed debt in the banking system after the Asian financial crisis in the 1990s – has already been bailed out and restructured and its chief executive executed for corruption.

It is Evergrande, however, and its cosy relationships with financial institutions – it had held a $US1.5 billion stake in one of its bank lenders until the crisis forced it to cash the stake out, with the bank insisting the proceeds be used to repay loans – that seems to have prompted the investigation.

The Central Commission for Discipline Inspection – the senior Communist Party institution charged with enforcing the Party’s internal regulations and searching out corruption within the Party – made it clear that preventing systemic risks was a key motivation for its investigation.

There is concern, within and outside China, that the crackdown on leverage and excessive risk-taking in the property sector could spread contagion through not just the sector itself but through the banking and shadow banking systems.

There is also a concern that the sector’s funding model, which includes pre-selling apartments before any construction and extensive use of high-yielding wealth management products promoted to retail investors, will cause social distress and unrest and challenge Xi Jinping’s new mantra of “common prosperity” even as he seeks a third term as president next year. 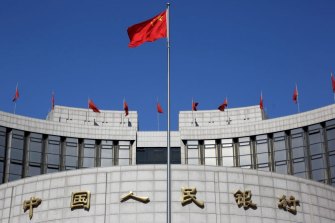 The People’s Bank of China is part of the audit. Credit:Bloomberg

The crackdown on financial institutions and regulators is a broader, more intense and more formal review of a sector that has been under intensifying scrutiny through this year.

A number of senior executives in the big state-owned banks – in the double-digits, at least – have already been punished this year for abuses of position, illegal investments and improper making of loans.

The crackdowns on big tech companies, fintechs and ride hailing companies under the banners of anti-monopoly, data privacy and security and systemic stability; the banning of private education, the restrictions of children’s access to technology and the assault on celebrity and fan cultures have had destabilising and destructive effects on those sectors and injected real fear – demonstrated by the wave of multi-billion dollar philanthropic “donations” – into the ranks of the billionaires who gained their wealth from those sectors.

It won’t surprise if, even if they are urged to continue to lend to property by China’s authorities, the existence of the review and their personal jeopardy causes some level of risk-aversion among China’s senior bankers and regulators, with potential systemic consequences even as China’s economy is already slowing.

The finance sector – particularly the big state-owned banking sector – and the property sector and the inter-connections between the two are far more central to China’s economy than those targeted earlier.

As the contribution of China’s “three red lines” policy (the limits on leverage and access to debt for over-leveraged property companies that were introduced last year) to the current crisis in its property sector highlights, there is a risk of unintended consequences that could flow from the current investigations.

There is a near-certainty that the investigations will uncover “corruption,” as the Party would define it.

Australia’s banking royal commission showed that even in supposedly well-managed and regulated systems a deep dive into its inner workings can reveal all manner of wrongdoings and cause enormous disruption and costs to the institutions and their stakeholders. It can also impact the institutions’ risk-appetites.

It won’t surprise if, even if they are urged to continue to lend to property by China’s authorities, the existence of the review and their personal jeopardy causes some level of risk-aversion among China’s senior bankers and regulators, with potential systemic consequences even as China’s economy is already slowing.

Whether it’s the bad loans they avoid or the good loans they don’t make, any contraction in lending would come at a sensitive time for China even though a thorough review of some of the incestuous relationships between giant China’s state-owned banks and its state-owned and private industries is probably overdue.