Macquarie Group and Commonwealth Bank are facing fresh scrutiny of their oversight of anti-money laundering laws after it emerged that overseas banks had reported close to $167 million of potential dirty money transactions flowing through the two Australian banks.

The International Consortium of Investigative Journalism (ICIJ) has released a massive leak of secret bank reports that show the Commonwealth Bank was flagged by overseas banks over millions of dollars of transactions, including some in crime hotspots in far eastern Russia and in Kazakhstan. 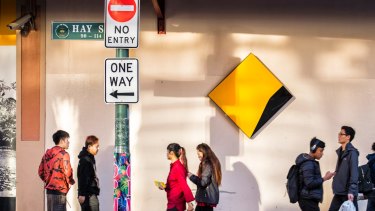 CBA may need to spend an extra $200 million a year on “defensive actions” in response to the Austrac allegations, analysts predict.Credit:Louie Douvis

Data released by the ICIJ on Monday shows more than $174 million of possibly dirty money flowed through Australian banks. Macquarie accounted for 72 per cent of the suspicious transactions by value, or $123 million.

The Commonwealth Bank was the next frequently named Australian bank in the data leak, with $44 million of transactions flowing from or to the CBA, which were red flagged by other banks. ANZ Bank, when including its Hong Kong branch, made up $4.7 million.

The three banks at the centre of the "FinCEN Files" leak: Bank of New York Mellon (BNY), Barclays and Standard Charted, all filed the reports with anti-money laundering authorities in the US as part of their reporting requirements.

Banks around the world are required to report suspicious transactions to anti-money laundering regulators to stamp out dirty money dealings, including the funding of terrorism and organised crime activities such as drug dealing and tax evasion.

It is not clear whether the Australian banks reported the transactions to the local money laundering regulator AUSTRAC. Anti-money laundering laws dictate that any payment over $10,000 must be reported to authorities as potentially suspicious as well as transactions that are indicative of potential crimes, such as an account making several smaller payments to avoid the $10,000 detection threshold.

CBA settled a massive civil case brought by AUSTRAC over the bank’s failure to report suspicious transactions for $700 million in 2018. It is not clear whether the transactions included in the ICIJ report formed part of AUSTRAC's case.

Macquarie has faced no court action from AUSTRAC, and its senior executive Greg Ward said in 2019 that the bank had no outstanding matters with the local money-laundering regulator.

The CBA's payments detail the global reach of Australia's largest bank. BNY flagged seven payments totalling $90,000 to CBA account holders from the Primorye Bank, located in the far eastern Russian city of Vladivostok, near the border with North Korea.

The cache also shows a large number of potentially structured transactions sent from Barclay's Hong Kong arm to CBA in 2016 and from UK bank Natwest's arm in the tax haven of Gibraltar.

A spokesman for CBA said the bank worked closely with law enforcement bodies and due to regulation it could not share the information about any particular customer.

"We are committed to ensuring that we take appropriate steps to identify, mitigate and manage the money laundering and terrorism financing risk that we face in conducting our business."

"We recognise that we play a critical role in protecting our customers and the community from the risks associated with money laundering and terrorism financing."