Plunging oil prices have taken a devastating toll on the economy of Alaska, one of the last American territories to gain statehood and among the most sparsely populated, at the same time its leaders grapple with the COVID-19 pandemic that has shut down businesses and slashed employment nationwide.

Initial jobless claims in the state that dubbed itself America's last frontier have surged to more than 70,000 in the six weeks through April 25, up from just 5,000 a year ago. A large portion were in the oil and gas industry, where “stay-at-home” orders aimed at slowing the spread of COVID-19 zapped global demand by as much as 30 million barrels per day, forcing producers to cut output and lay off workers.

It was a harsh blow, given that oil and gas are responsible for about 16 percent of state revenue and tied to 77,000 jobs with $4.8 billion of wages a year. Industry laborers — about 30 percent of whom are non-Alaska residents – make an average of $148,000 annually, or 2.7 times the state's typical wage earner.

US DRILLERS EXPECT TO SLASH OIL, GAS RIGS TO LOWEST EVER

The worst isn't yet over. Production cuts following a truce in the price war between Saudi Arabi and Russia have only just begun, and stockpiles are not only still increasing, they're nearing the capacity of storage facilities to contain them.

"Our oil industry has just been brought to its knees because of the price issues," Alaska Sen. Lisa Murkowski, a Republican, said on a call with reporters Friday.

The state's number-crunchers predicted in early April that oil revenue would drop by $527 million, to a level of nearly $1.1 billion, as long as Alaska North Slope crude averaged $51.65 a barrel in the last two months of Alaska's fiscal year, May and June.

The impact now seems likely to be harsher. The Department of Revenue predicts income could be down at least an additional $100 million, following a sharp drop in prices after the earlier report was published.

Alaska’s oil revenue comes from a production tax, corporate income tax and royalties, and every price change of $1 per barrel causes a $25 million swing in unrestricted revenue, as long as production holds steady.

While 2020’s final reading is difficult to gauge due to the sharp drop in oil prices and changes in production levels, the Department of Revenue projects oil revenue in fiscal year 2021 — which begins in July — will fall to $716.6 million.

The state’s forecast assumes a price of $37 a barrel for Alaska North Slope crude and production of 512,430 barrels per day. On Friday, the statewide production forecast for 2021 was lowered to 479,729 barrels.

“We had a renaissance going on here prior to this pandemic and the Saudi-Russian price war,” he added, pointing to billions of dollars of new investment, which was expected to raise production to 775,000 barrels per day, and the discovery of millions, if not billions, of barrels of oil.

Twenty years ago, Alaska’s prized wells were the crown jewels of North America, pumping out 2 million barrels per day. Now they are producing 500,000 barrels, less than 20 percent of their 2012 peak.

The price of the crude produced has plunged 67 percent to $22.38 per barrel this year. Last month, it briefly dipped below zero before rebounding to about $17. 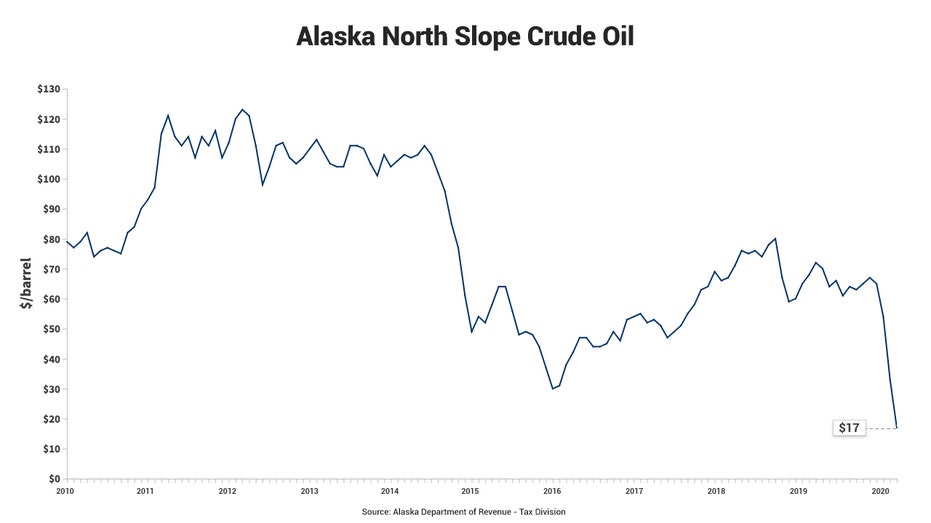 Typically, Alaskan crude trades at parity with Brent, the international standard, but a sharp drop in demand from the Pacific market, and the West Coast of the U.S. in particular, has it trading at a $10-per-barrel discount.

Produced in oil fields on the North Slope, Alaska's crude is then moved by either feeder pipelines to Pump Station 1 at Prudhoe Bay, or down the Trans-Alaska Pipeline to Valdez. The pipeline moves about 500,000 barrels of oil per day.

The oil is then loaded onto tankers for delivery, mostly to the West Coast. It's priced for delivery at Long Beach, California, where there are currently dozens of tankers parked off the coast due to the supply glut. 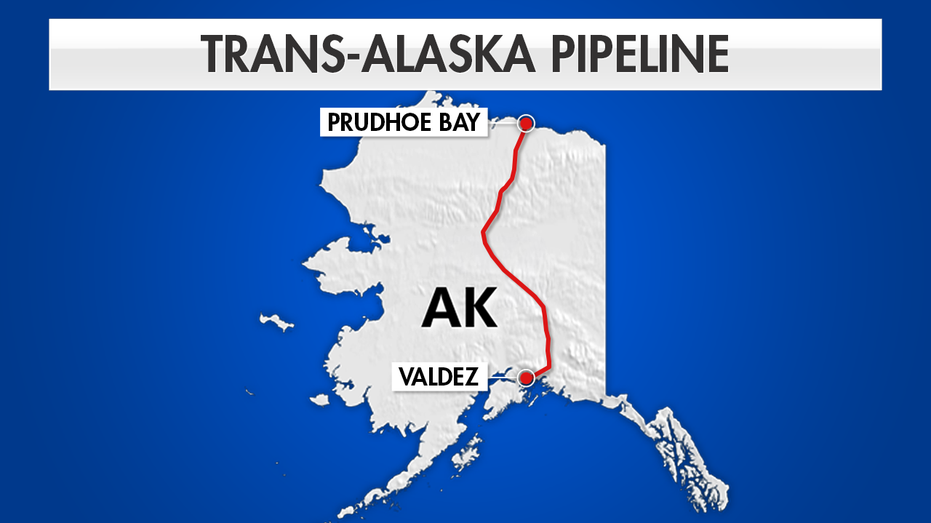 Inventory at Valdez has swelled to 4.2 million barrels, or 64 percent of the hub’s 6.6 million-barrel working capacity.

In order to slow the buildup, the Alaska Pipeline Company, which operates the Trans-Alaska Pipeline, increased its mandated proration of production on Friday to 15 percent from 10 percent.

The cuts, which will last through at least the end of May, will remove about 50,000 barrels per day of production.

Conoco, which operates oil fields including Kuparuk and Alpine — the second- and third-largest in the state — announced a voluntary reduction of production starting in late May and lasting through June that will remove 50,000 to 100,000 barrels per day.

The output cuts will help remove some of the excess crude supply that has flooded the market as a result of the 30 million-barrel-per-day global demand destruction from “stay-at-home” orders to slow the spread of COVID-19 and the recently resolved price war between Russia and Saudi Arabia.

While the pandemic is a so-called black swan event that virtually no one predicted, it heightens pressure that has been building over the past decade on the oil industry and, consequently, on Alaska.

WHAT IS A BLACK SWAN?

Ten years ago, when crude was above $80 a barrel, production was higher and the state wasn’t paid by its reserve fund, oil revenue accounted for 90 percent of Alaska's income.

But as prices and production slumped, the state faced mounting budget difficulties and in 2018 passed the Alaska Permanent Fund Protection Act, directing funds to general state expenditures for the first time. Alaska received $2.9 billion from the fund in fiscal year 2020 and is set to receive $3.1 billion in 2021. 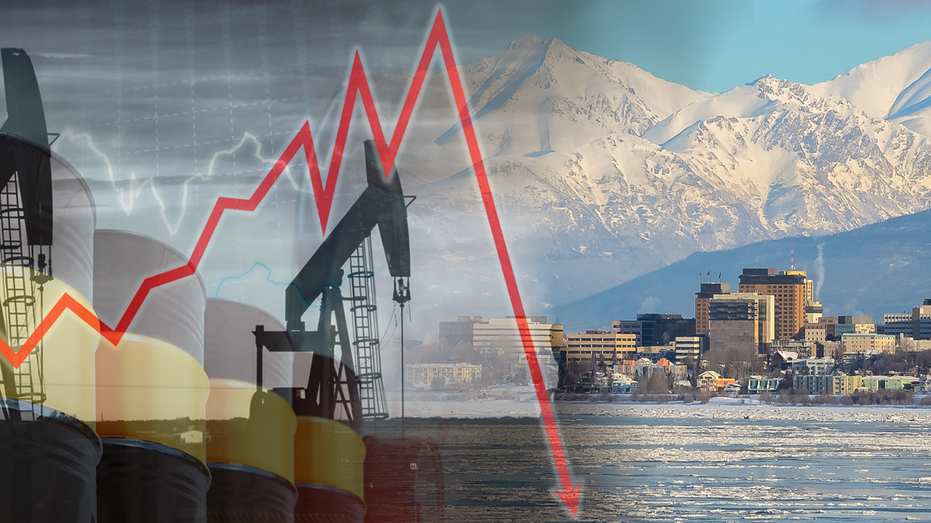 Even with the newfound income stream, Alaska is facing a budget shortfall. The state’s budget was $4.8 billion in 2020 with revenue currently projected at $4.5 billion. That gap is expected to grow in the years ahead.

“There's going to have to be some serious discussions as to what the state's going to look like,” Alaska Gov. Mike Dunleavy told FOX Business. “Nothing can be left off the table.”

The Alaska Permanent Fund, which had a total value of $60 billion on March 31, 2020, was established in the late 1970s as a way to ensure that a portion of the "windfall of oil revenue" the state was receiving was preserved for future generations, according to Dan Stickel, chief economist at the state's Department of Tax Revenue.

CORONAVIRUS VOLATILITY THWARTS 'SELL IN MAY' TACTIC FOR STOCKS

The fund, which receives 25 percent to 50 percent of royalties and related revenues from minerals depending on when leases were issued, was effectively the first sovereign wealth fund. Each year, Alaskan residents receive an approximately $1,000 dividend payment. The fund’s annual payout to the state is set a couple of years in advance.

The tourism and fishing industries rank behind oil in terms of state revenue, making up 2.1 percent and 1.9 percent, respectively, and the COVID-19 pandemic is putting their contribution in jeopardy.

“Tourism is probably going to be a complete loss,” Dan Robinson, research chief at the Alaska Department of Labor and Workforce Development, told FOX Business.

The state’s tourism industry relies heavily on cruise ships that can only sail through September. More than 2 million tourists visit Alaska each year, and 80 percent of travelers have already canceled their plans due to cruise lines shutting down and limited air travel.

As a result, Alaska will be counting on the fishing industry to ”save” the summer, according to Murkowski. There is some concern, however, as a large percentage of fish-processing workers come from out of state and would have to travel while the pandemic hasn’t fully abated.

“There is no other industry that has the same level of economic generation.”

“We have to be able to prosecute a fishery safely for the community, safely for the fishermen and the processors,” she added. “But we also need it from an economic perspective.”

A strong fishing season will be especially important as oil prices are expected to remain low for at least the next several months. There are, however, some green shoots on the horizon.

Damien Courvalin, head of energy research and senior commodity strategist at Goldman Sachs, forecasts an oil bull market is building but says it will “take time and require patience.”

He predicts a “structural repricing” will lift Brent crude prices to an average of $55.60 per barrel in 2021 and to $65 by the end of the year as demand returns and production declines.

“There is no other industry that has the same level of economic generation,” Kara Moriarty, president and CEO of the Alaska Oil and Gas Association, told FOX Business. “No one could have foreseen a global pandemic colliding with the global price war to create the situation that we have today.”

While navigating it, “Alaska just has to make sure that we remain competitive because as prices recover, they'll recover across the globe,” she added.

Dunleavy is confident the state is up to the challenge.

“We go through earthquakes, we go through volcanic eruptions, floods, fires,” he said. “We're handling this pandemic as well as anyone could. We'll get through this budget crisis as well.”