There is an old saying that when all you have is a hammer, everything looks like a nail. Central banks’ hammer is interest rates, and with rising inflation, the banks have no choice but to use that hammer to beat down inflation. And hammering the nail too hard for too long in an attempt to stop inflation also hammers down economic activity, pushes bond yields higher and continues to put pressure on risk assets.

For investors, that means they must constantly evaluate the amount of economic damage that is being priced into equities because of the hammering. This is no longer a “buy the dip” macro environment, according to asset manager BlackRock’s 2023 Global Outlook. In fact, the report notes, “Corporate earnings expectations have yet to fully reflect even a modest recession.”

If investors have been looking at government bonds to protect their portfolios, that is unlikely to happen in the current environment:

The negative correlation between stock and bond returns has already flipped, … meaning they can both go down at the same time. Why? Central banks are unlikely to come to the rescue with rapid rate cuts in recessions they engineered to bring down inflation to policy targets. If anything, policy rates may stay higher for longer than the market is expecting.

The somewhat better news is that BlackRock’s Investment Institute, which authored the report, expects central banks eventually to halt the rate hikes as the damage to the economy becomes apparent. The firm expects to become more positive on risk assets sometime in 2023 but says, “We are not there yet.”

Get Our Free Investment Newsletter 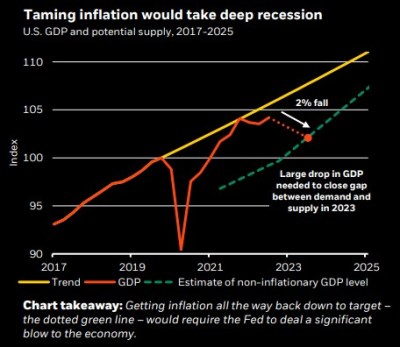 Source: BlackRock Inc.In the short term (6 to 12 months), BlackRock is underweight in developed market equities in general and specifically in the United States, the United Kingdom and the rest of Europe. The firm is neutral on Japan, China, emerging markets in general, and Asia, excluding Japan.

Finding a qualified financial advisor doesn’t have to be hard. SmartAsset’s free tool matches you with up to 3 fiduciary financial advisors in your area in 5 minutes. Each advisor has been vetted by SmartAsset and is held to a fiduciary standard to act in your best interests. If you’re ready to be matched with local advisors that can help you achieve your financial goals, get started now.