New York (CNN Business)Robinhood cashed in on the meme stock craze. Now Robinhood itself is turning into the next plaything for the retail trading crowd.

Shares of Robinhood spiked as much as 82% early Wednesday — even though the controversial trading company, which debuted on Wall Street just last week, announced no new developments.
Robinhood rallied so much that trading was halted multiple times for volatility. In recent trading, Robinhood was up a more modest 30%.

The frenzy comes after Robinhood finished 24% higher on Tuesday, finally breaking above its initial public offering price of $38.

Robinhood is suddenly garnering huge amounts of interest from retail investors — including WallStreetBets, the army of traders behind the GameStop surge of earlier this year.

“Robinhood engineered itself to be a meme stock from the get-go,” said Max Gokhman, head of asset allocation at Pacific Life Fund Advisors. He pointed to how Robinhood took the unusual step of selling a large chunk of its shares to users and opened its road show up to the public.
“When that happens, we should absolutely expect eye-watering price moves on any given day, without any news,” Gokhman said.

Robinhood is easily the most-talked about stock over the last 24 hours on WallStreetBets, according to Swaggy Stocks, which tracks mentions on the Reddit page. Robinhood accounted for more than one-quarter of all ticker mentions on WallStreetBets.
Thinknum Alternative Data, which tracks WallStreetBets mentions for hedge funds and banks, found that Robinhood’s mention volume is twice as high as that of AMD (AMD), the second-most mentioned stock on the page.
Reddit’s focus on Robinhood is “quite astonishing,” said Justin Zhen, Thinknum’s co-founder and president, adding that “what is interesting is a lot of the sentiment is actually negative.”
Against this backdrop, retail trading volume climbed tenfold on Tuesday, Reuters reported, citing Vanda Research.

Robinhood is also benefiting from an endorsement from a closely watched fund manager. Cathie Wood’s Ark Innovation ETF (ARKK) has revealed significant and growing purchases of Robinhood in recent days.
“A lot of retail investors put their faith in Cathie and see her as their field general,” said Gokhman.
All of this is in stark contrast with Robinhood’s rocky start to life as a public company.
Robinhood priced its IPO at the low end of expectations and then swiftly fell sharply after it began trading on the Nasdaq last week. The stock ended its first day down 8%, failing to score the first-day pop that new companies covet. 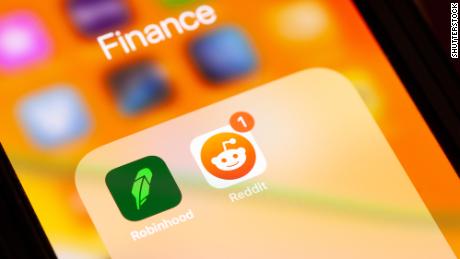 More than any other company, Robinhood has benefited from a surge in retail trading volumes. Robinhood’s revenue surged 245% to nearly $1 billion last year as its user growth rose sharply.

Robinhood has also benefited from the meme stock phenomenon, in which GameStop (GME), AMC (AMC) and other consumer-facing companies have been driven sharply higher despite little changing fundamentally.
However, Robinhood did not appear to be very popular with traders on Reddit ahead of the IPO. Commentary on the site’s popular WallStreetBets forum indicated many individual traders are angry with Robinhood, and some even threatened to short it.
Source: Read Full Article