In an era of booming house prices and fierce competition for properties, tales of Australians pushing the envelope with their mortgage applications – usually by fudging expenses to maximise borrowing power – have not been uncommon.

Hedge fund manager John Hempton and economist Jonathan Tepper famously sought to expose these so-called “liar loans” in 2016, pretending to be a gay couple on the hunt to buy property in Sydney’s west. They reported being coached by mortgage brokers on how to get supersized loans approved by banks, prompting them to “short” a housing market they thought was a massive bubble. 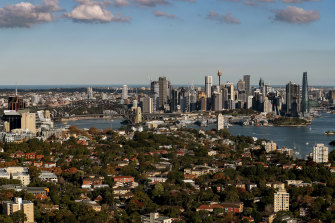 An estimated 22 per cent of owner-occupiers only had emergency funds to cover two months of repayments.Credit:Bloomberg

House prices have, of course, risen sharply since then, fuelled by ultra-low interest rates. But with mortgage rates now rising for the first time in nearly 12 years, the spotlight is back on banks’ vast home loan portfolios, and the risk that some borrowers overstretched themselves to get into the market. And with interest rates set to keep rising (Goldman Sachs analysts now expect the cash rate to hit 2.6 per cent by the end of the year), the key question is whether these overstretched borrowers will be able to cope.

Investment bank UBS released a survey last month looking at how rigorously banks assess borrowers, which included asking if people fudged some part of their loan application. The survey of 860 people concluded that 37 per cent of the mortgages on Australian banks’ books were misrepresented loans, down from 41 per cent a year earlier, suggesting a “modest” improvement in lending standards.

Yet despite the improvement, UBS predicted higher interest rates would expose vulnerabilities. For example, the survey found about 22 per cent of owner-occupiers only had emergency funds to cover two months of repayments – though more than half of borrowers were more than three months ahead on their repayments.

Of the big four banks, UBS claimed ANZ Bank’s lending was “at odds with peers”, after it said more than half of the respondents who took out a loan with ANZ had “misstatements” in their application.

ANZ chief executive Shayne Elliott dismissed these claims on Wednesday, saying the survey was done using a “really small” sample, and it had a “ridiculous” margin for error, given the bank actually has about 1 million customers.

On the more general issue of people lying on their loan applications, Elliott said banks were required by law to check the information provided by customers, which includes going through bank statements with a fine-tooth comb.

“While it’s sad that people feel the need to mislead or lie on their loan applications, we do not take our customers at their word, and actually the law requires that we do not,” Elliott said.

Even so, others who are more pessimistic about the property market, such as Digital Finance Analytics founder Martin North, believe the ongoing debate about “liar loans” highlights the risk that some people have stretched themselves too far to buy property.

“While it’s sad that people feel the need to mislead or lie on their loan applications, we do not take our customers at their word, and actually the law requires that we do not.”

“Is it a liar loan, or is it being encouraged by mortgage brokers, for example, to present your information in a particular way because they know how to get it through the system?” North says.

North, who has long had concerns about the high level of household debt, worries that rate hikes could be part of a “perfect storm” slowly brewing in housing, alongside rising cost of living, falling house prices, and stagnant income growth. North says his monthly surveys of 4500 people show more than a third have problems with their cashflow, though he also says it will take a couple of years for the full extent of mortgage stress to emerge.

Hempton, of Bronte Capital, puts it this way: “The question is how far can the Reserve Bank push up interest rates before they cause real pain in this economy? And I think the answer is not very far.”

As things stand, the number of people getting into trouble with their home loan repayments is very low.

ANZ’s Elliott described his bank’s credit quality as “amazingly benign” on Wednesday, saying 0.7 per cent of its borrowers were behind on their home loan, compared with 1 per cent normally.

An analyst at S&P Global Ratings, Erin Kitson, says there are a number of “mitigating factors” that temper the risks created by rising rates and high housing debt.

Unemployment is regarded as the most important driver of mortgage defaults, yet it is at its lowest level in decades. Banks have reduced interest-only lending, and loans to people with skinny deposits. Households have also amassed a whopping $240 billion in savings in the pandemic, which may act as a cushion as interest costs creep up.

As for “liar loans”, Kitson points to digital advances that have made it easier for banks to check if customers’ applications are factual, by comparing their claims with financial data. “It’s hard to hide that now because you can see it in the transaction history of borrowers,” she says.

Many in the financial establishment are not convinced there will be a major wave of bad home loans. But few predicted inflation and interest rates would be rising this sharply either.

The Market Recap newsletter is a wrap of the day’s trading. Get it each weekday afternoon.