What’s happening: Germany’s DAX and France’s CAC 40 dropped 3.3% in early trading, while the FTSE 100 in London fell 3.4%. US stock futures are also sharply lower.
The market reaction comes as cases surge in both Europe and parts of the United States heading into the fall and winter, when the spread of the virus could accelerate as people spend more time inside. Hospitals will also face new constraints as the seasonal flu resurfaces.

Should cases continue to rapidly climb, government officials could be forced to adopt a wave of new restrictions.
So far, countries like the United Kingdom have largely relied on targeted measures to try to keep the economic recovery on track. But pressure is building for a stronger national response, which would have big consequences for the economy.

The UK has “in a bad sense, recently turned a corner,” UK chief medical advisor Chris Whitty said Monday at a briefing.
In a note to clients Friday, Deutsche Bank economist Sanjay Raja warned that new rules will have an economic impact.
“Stricter social restrictions will weigh on the UK’s recovery,” he said. “This is one reason we expect the recent GDP surge to be short-lived.”
Watch this space: It’s not just Europe. In 31 US states, the number of new Covid-19 cases has increased by at least 10% this past week compared to the previous week, according to data Sunday from Johns Hopkins University.
“Investors are becoming increasingly worried about the momentum in the economic recovery given the resurgent numbers of global Covid-19 cases,” said Hussein Sayed, chief market strategist at FXTM.
Bright spot: New Zealand has dropped social distancing restrictions everywhere except its biggest city, Auckland, after reporting no new cases on Sunday. But many of the world’s biggest economies appear to be heading in the wrong direction.

TikTok narrowly avoided a ban on US downloads this weekend after President Donald Trump blessed a deal that would give Oracle and Walmart a stake in the social media app, which is owned by China’s ByteDance.
But as the week kicks off, it’s clear the saga is far from over.
What’s happening: Oracle and Walmart say that the new company, TikTok Global, will be majority owned by American investors — but ByteDance has released a statement reiterating that it will retain an 80% stake.
Trump has also complicated matters by alluding to a mysterious $5 billion education fund he claims will be created because of the deal. ByteDance, meanwhile, said it’s unaware of this arrangement.
“Some news media reported that TikTok will set up a $5 billion education fund in the United States,” ByteDance said in a statement posted Sunday on Chinese social media. “We would like to clarify that it was also our first time hearing about the news.”
What it means: The Trump administration delayed the TikTok ban by just one week —which means time is again running out to sort through the agreement and secure approval from all the necessary parties. Notably, it’s not clear that the arrangement has backing from Beijing.
That’s not all: TikTok isn’t the only moving part at a crucial moment for the US-China relationship and the companies forced to navigate rising tensions between the world’s two biggest economies.
A separate download ban on messaging app WeChat, which is owned by China’s Tencent, was temporarily blocked by a federal judge Sunday night, hours before it was due to take effect. The US Commerce Department did not immediately respond to a request for comment.
Meanwhile, shares of HSBC (HBCYF) fell nearly 6% to a multi-decade low in London on Monday after The Global Times, a Chinese state-backed tabloid, suggested that the bank could be added to a list of “unreliable” entities targeting foreign companies. (Over the weekend, a BuzzFeed report also accused HSBC and other major lenders of failing to stop criminals from moving dirty money around the world. The company said it has taken major steps to fight financial crime since 2012.)

Nikola founder steps down in battle with short seller

A short seller’s claims of fraud at Nikola continue to rock the electric truck startup. The company has been a recent favorite among retail investors and scored a big investment from GM earlier this month. 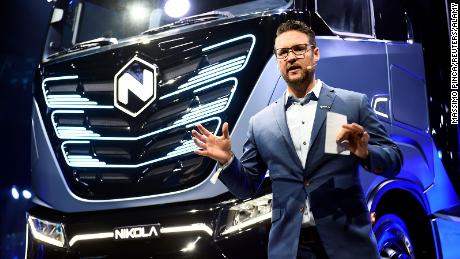 This just in: Founder Trevor Milton stepped down as executive chairman on Sunday after Hindenburg Research, which makes money by betting against companies, accused Nikola of misleading investors and overstating the value of a business deal, my CNN Business colleague Charles Riley reports.
Milton has also resigned from the company’s board, Nikola said in a statement. The company has previously denied the allegations and threatened legal action against the research company that made them.
“The focus should be on the company and its world-changing mission, not me,” Milton said in a statement posted on Twitter. “I intend to defend myself against false accusations leveled against me by outside detractors.”
Stephen Girsky, a former vice chairman of General Motors and current Nikola board member, will take over as chairman.
Investor insight: Nikola’s stock skyrocketed after the startup joined the Nasdaq through a reverse merger with a so-called “blank check” acquisition company in June, but it’s come under pressure since Hindenburg Research published its report. Shares dropped 30% in premarket trading on Monday.