At the US Federal Reserve Board’s Open Market Committee meeting this week the members will no doubt spend most of their time discussing the surge in economic activity and its longer term implications for inflation. Perhaps they should lift their gaze and look at some of the unusual developments in financial markets this year.

More than a decade of loose central bank monetary policies have been overlaid by just over a year of ultra-loose policy and fiscal responses to the pandemic that dwarf governments’ reactions to the 2008 financial crisis. 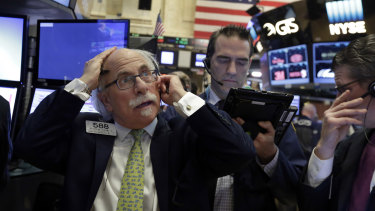 There have been unusual developments in financial markets this year.Credit:AP

The combination of policies has had the desired effects. The US economy is roaring back, with first-quarter GDP expected to show at least 6.5 per cent growth and, with help from the base effects (the reference point is the economic nadir of the pandemic), second-quarter growth could reach double-digits.

Unemployment is tumbling, retail sales are booming, manufacturing activity is surging and there’s been a significant uptick in inflation and in inflation expectations, which are at their highest levels in eight years.

Having changed its monetary policy framework to target an average inflation rate sustainably above two per cent, however, no-one expects the Fed to deviate from its view that it should retain an accommodative policy stance and leave interest rates where they are (zero to 0.25 per cent) until at least 2023.

The markets would be shocked if the Fed departed from its now-familiar script at its meeting on Wednesday in Washington but the Fed is increasingly caught up in a dilemma of its own making because the tide of cheap liquidity its $US120 billion ($155 billion) a month of bond and mortgage purchases has generated is producing some quite peculiar and potentially destabilising outcomes.

This year we’ve had the Gamestop drama, where retail investors using options and margin loans took on and defeated hedge fund short-sellers (sending many of them broke in the process).

Nearly half the global initial public offerings this year – about $US100 billion – have been of “SPACs” – the special purpose acquisition companies that resemble the discredited cash box companies of the 1980s.

Losses from the derivative exposures of some of the world’s largest banks to a previously unknown private “family office” of a man who pled guilty to insider trading have now topped $US10 billion.

Credit Suisse ($US5.7 billion), Nomura ($US2.9 billion), Morgan Stanley ($US900 million), UBS ($US860 million) and two smaller Japanese banks who have lost $US400 million between them have been caught up in one of the world’s largest, and one of its quickest, collapses of a private investment vehicle after collectively giving Archegos Capital what effectively amounted to margin loans of $US50 billion or more. 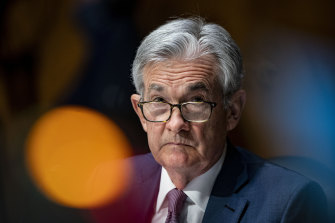 The Fed, led by chairman Jerome Powell. No-one expects the Fed to deviate from its view that it should retain an accommodative policy stance and leave interest rates where they are (zero to 0.25 per cent) until at least 2023.Credit:AP

There’s also been the Greensill collapse (with Credit Suisse alone incurring losses of $US4.7 billion so far).

Just as disconcerting has been the volatility in cryptocurrency prices. Bitcoin was trading below $US10,000 ahead of the crash in markets in March last year as the pandemic hit. It’s been as high as about $US65,000 this month before falling back to around $US55,000.

The market for Dogecoin – a “cryptocurrency” created as a joke – is now valued at about $US35 billion and its price has almost quintupled this month, albeit to “only” US27 cents.

The cryptocurrency market now has an overall value of about $US2 trillion, about half of it attributable to bitcoin.

Then there’s been the bizarre boom in “NFTs,” or “non-fungible tokens” – digitised and unique versions of almost anything that are stored on the blockchain ledger to verify their uniqueness.

There is activity occurring in financial markets that is at times bizarre, risky and, if history were a guide, unsustainable. Financial “innovation” is creating more and more new “assets” to speculate with and even conventional institutions – banks and fund managers – are unable to resist the temptation.

An NFT of Jack Dorsey’s first tweet as the founder of Twitter sold for $US2.9 million. An NFT of an artwork created by a digital artist was recently bought by a crypto entrepreneur for $US69.3 million. Baseball cards, land “titles” from digital games, films and sporting highlights and even images of sneakers are all being traded.

Then there are the markets. The S&P 500 is trading at 32 time’s historical earnings and more than 22 times forecast earnings against an historical average PE multiple in the mid-teens. It’s up 68 per cent from its nadir in March last year and about 25 per cent above its pre-pandemic levels last February.

The technology-laden Nasdaq market is trading on an historical PE of about 116 times and the biggest and most profitable of the tech stocks (Facebook, Apple, Amazon, Goggle etc.) are trading at about 55 time’s earnings.

The only way to rationalise valuations and the level of speculative activity by investors and some of the world’s biggest financial institutions is to point the finger at the extraordinary amounts of cheap liquidity and free money being pumped into the financial system by central banks and governments; a flood of money supply that has completely disfigured assessments of risk or the risk-adjusted cost of capital.

At the Fed’s meeting it is unlikely that cryptocurrencies, or NFTs, or Archegos and Greensill, will get much of a mention, if any. The sharemarket, and credit markets — where the costs of credit even for issuers of junk bonds are at their historically lowest levels — might get passing attention.

The Fed and its peers are caught in a leverage trap of their own, albeit understandable, creation.

There is activity occurring in financial markets that is at times bizarre, risky and, if history were a guide, unsustainable. Financial “innovation” is creating more and more new “assets” to speculate with and even conventional institutions – banks and fund managers – are unable to resist the temptation.

As long as the Fed and the other key central banks continue to keep their interest rates close to or below zero and continue to pump near-costless liquidity into their systems via quantitative easing, however, it will be sustained and, indeed, encouraged. 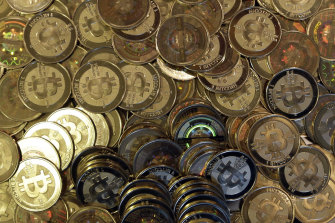 The cryptocurrency market now has an overall value of about $US2 trillion, about half of it attributable to bitcoin.Credit:AP

The dilemma for the central banks is that there is no easy exit from their current policy settings.

If they try to exit their current policy settings they could tear the entire pack of cards down and, given the increased levels of debt at every level within advanced economies – governments, corporates and households – wreak financial and economic havoc.

Yet, maintaining their policies will only inflate asset values further and encourage more speculative activity.

There is no obvious or painless exit from the leverage trap they’ve created and so it’s easier to ignore it and postpone the moment it will inevitably have to be confronted.