Economic rebound has been nothing short of ‘spectacular’: Investment strategist

The stock market has a nearly perfect track record of predicting the winner in U.S. presidential elections.

The S&P 500 has indicated the winner 87 percent of the time and every time since 1984, according to Ryan Detrick, senior market strategist at Boston-based broker-dealer LPL Financial.

“Think about it: No one expected Hillary Clinton to lose back in 2016 — no one except the stock market, that is,” he added. “The Dow had a 9-day losing streak directly ahead of the election, while copper — more of a President Trump infrastructure play – was up a record 14 days in a row, setting the stage for the change in party leadership in the White House.”

FOREIGN INVESTORS TO BE BIGGEST BUYERS OF US STOCKS: GOLDMAN SACHS

Since taking office, Trump has touted the stock market's performance as a gauge of his success more often than any of his recent predecessors, pointing to the Dow's climb past a record-setting level of 20,000 in 2017 and its flirtation with 30,000 this year before the COVID-19 pandemic's extent became clear.

Blaming what he has referred to as a "plague" for upending the U.S. economy in the past three months, Trump has promised a resurgent economic boom in 2021 if he wins a second term.

While past stock-market performance does not guarantee future results, the S&P 500 has slid 5.5 percent this year, rallying from coronavirus lows as the U.S. economy began to reopen.

The benchmark index has gained 18 percent in the three months through June — the largest one-quarter percentage increase since the end of 1998 — after plummeting 34 percent from its Feb. 19 record high.

Stay-at-home orders aimed at slowing the spread of COVID-19 forced nonessential businesses to shutter their doors beginning in mid-March, leading to the sharpest economic slowdown of the postwar era. The U.S. economy contracted by 5 percent in the first quarter and is expected to shrink by at least 30 percent in the April-through-June period before rallying during the second half of the year.

The downturn creates a significant hurdle for Trump’s reelection bid, since incumbents have lost five of seven elections when the U.S. economy has fallen into a recession — at least two consecutive quarters of contraction — in the two years ahead of an election. 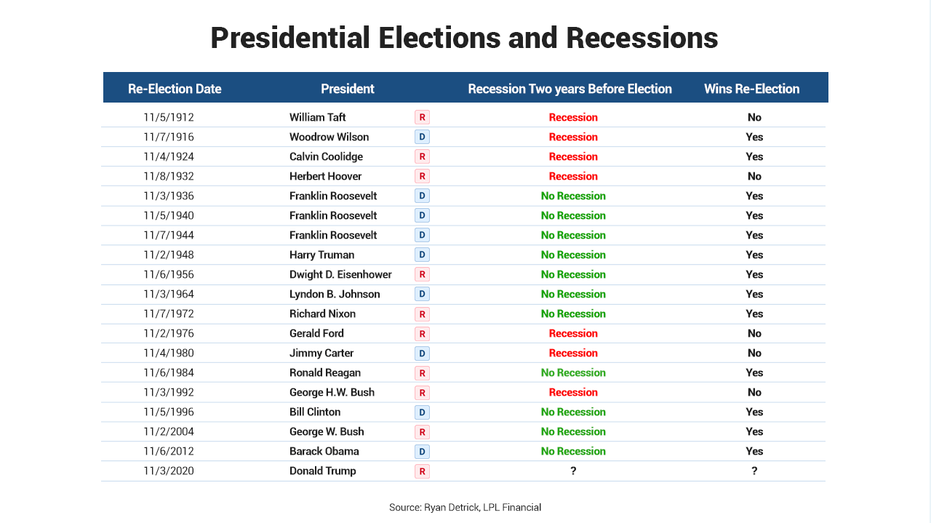 Meanwhile, incumbents are a perfect 11 for 11 if the economy avoids a recession in the 24 months ahead of an election.

Former President George H.W. Bush was the last president to lose a reelection campaign, ceding the White House to former President Bill Clinton in 1992. That was also the last time the U.S. economy was in a recession in the 24 months ahead of an incumbent's bid for a second term.