With crude oil prices up by about 47% since the beginning of 2021 and gasoline prices now averaging $3.08 a gallon for regular, virtually every stock in the oil and gas industry is trading near recently posted 52-week highs. As Americans awake from their more-than-year-long nap, travel is among the first things on their mind.

More than 2 million Americans went through U.S. airports on Sunday, the first time the total has reached that level since February of last year. Nearly half a million people visited Yellowstone National Park last month, the highest total for May ever recorded. In the first five months of 2021, 658,513 people have visited the park, up 14% compared with the pre-pandemic year of 2019 total of 576,776.

Americans are expected to hit the road in a big way this year, and that means demand for oil and gasoline is rising and supply is rushing to keep up. The pipeline (midstream) business is critical to meeting that demand, as the recent cyberattack on the Colonial Pipeline system amply demonstrated. Why then did Goldman Sachs cut its rating on one of the nation’s largest pipeline and infrastructure companies?

On Monday, Goldman Sachs downgraded Kinder Morgan Inc. (NYSE: KMI) from Neutral to Sell, while raising the price target from $14 to $15, saying that the firm expects the company’s share price to lag its large-cap peers in the second half of this year. The following chart tracks the share prices of the six largest (by market cap) midstream companies from January 2020 through last Friday. Kinder Morgan (the blue line) has added less than 1% during the period, the least of any midstream company. 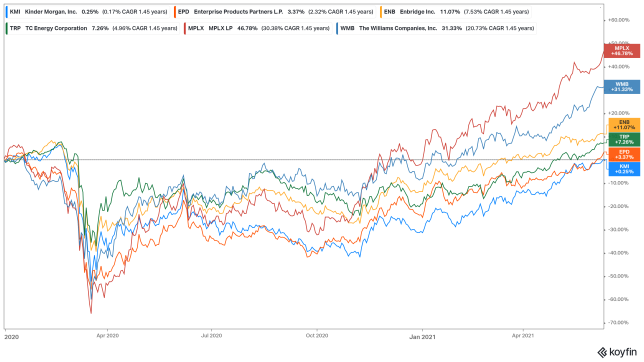 Goldman Sachs notes that for 2021 to date, Kinder Morgan is up 39%, in line with its peers, and the Alerian Midstream Index, which is up 40% in the same period. That’s not enough:

However, we believe KMI has outpaced a reasonable valuation level relative to its peers and its history as shares now trade at 11x 2022E consensus EBITDA—1x above history—and at a 1x premium to large-cap peers compared to a -0.5x–1.0x discount historically.

Even with the price target increase, Kinder Morgan stock is trading nearly $4 a share higher than the Goldman Sachs target and nearly $1.00 higher than the consensus target of $18.10.

At the same time, Goldman raised its rating on Cheniere Energy Partners L.P. (NYSE: CQP) from Neutral to Buy and lifted its price target on the stock from $53 to $56. Cheniere stock also trades above its consensus price target, but the Goldman target implies a 36% total return upside relative to the median of 13% of its coverage universe.

Other pipeline firms Goldman Sachs called out as having a path to improved free cash flow generation and material shareholder returns were Cheniere Energy, Targa Resources and Energy Transfer.

Now, turn to the bad news on Ferrari N.V. (NYSE: RACE). Goldman Sachs analysts downgraded the stock from Neutral to Sell and cut the legendary automaker’s price target from $227 to $207. The stock closed Friday at $211.31.

Goldman Sachs lowered its rating on the stock based on its evaluation of four key areas. First, the firm expects capital spending to rise as Ferrari speeds up its new technologies and the announced 2025 delivery of its first EV. Second, the analysts see limited scope for higher earnings. Third, they see no benefit to Ferrari from the overall recovery from the auto industry’s chip shortages. Fourth, the analysts see a 2% downside to their price target compared with a sector average of more than 12% for other automakers in the firm’s coverage.