Rep. Alexandria Ocasio-Cortez (D-N.Y.) said Monday that, if reports are true about the contents of an emerging COVID-19 stimulus bill that Congress is negotiating with the White House, she plans to vote against the legislation.

In a news conference held by progressive lawmakers and activists, Ocasio-Cortez said her district’s suffering inspired her to insist upon more ambitious legislation. She represents immigrant-heavy neighborhoods in central Queens with some of the country’s highest death rates.

Ocasio-Cortez was the only member of Congress who participated in the news conference to threaten a “no” vote, but Reps. Pramila Jayapal (D-Wash.) and Mark Pocan (D-Wis.), co-chairs of the Congressional Progressive Caucus, also expressed their tentative worries about it.

Asked whether the CPC would attempt to block the bill, Jayapal replied, “What you are hearing is the level of concern with what has been proposed.”

Like Ocasio-Cortez, Jayapal emphasized that members of Congress have not yet seen the final text of the bill. She also said that the full CPC, which has over 90 House members with a wide range of views, has yet to discuss the legislation as a group. 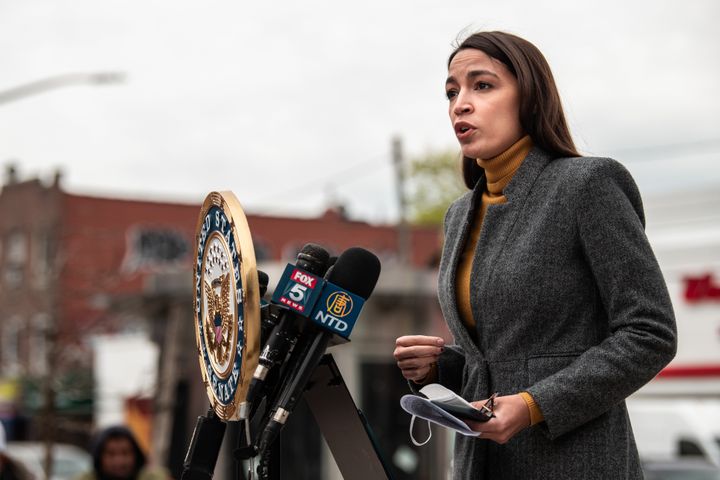 Even if a group of members wanted to vote “no” or try to assemble a bloc capable of derailing a bill, it’s not clear whether they would get the chance.

The $2 trillion stimulus bill that Congress passed in late March only passed by a voice vote because there were not enough members of Congress willing to demand a recorded roll-call vote. (Ocasio-Cortez told HuffPost that she voice-voted “no” on that legislation.)

The House would have passed the bill by unanimous consent, precluding the need for an in-person vote of any kind, including a “voice” vote, were it not for the objection of Rep. Thomas Massie (R-Ky.).

It will still be hard to force a vote on the next bill since the Democratic-controlled House relies on an in-person voting system that requires members to engage in health-endangering travel in order to participate.

Last week, House Speaker Nancy Pelosi (D-Calif.) signed off on a plan to allow members to vote through in-person proxies. Pocan said Monday that they would have a better idea of whether the system will be in place in time to vote on the new stimulus bill after a House Democratic Caucus call later in the day.

The CPC itself is moving ahead with plans to conduct Congress’ business from afar. The bloc is due to hold a virtual hearing on preventing layoffs on Thursday.

In addition to ripping Republicans for their focus on big business at the expense of ordinary workers, Ocasio-Cortez lamented Congress’ inaction during the pandemic. The complaint was an implicit indictment of Pelosi’s leadership since she has not moved quickly to create an alternative to in-person lawmaking.

The purpose of the news conference, which also included Reps. Rashida Tlaib (Mich.), Ayanna Pressley (Mass.) and Ilhan Omar (Minn.), was for progressive lawmakers ― and allied activist groups ― to publicize their demands for the next stimulus bill.

Under the banner of “#PutPeopleFirst,” the progressive caucus is calling for, among other things, a federal paycheck guarantee program, hazard pay for front-line workers, monthly payments of $2,000 to every household for the duration of the crisis, and a national moratorium on evictions and foreclosures. All of the provisions would apply to every American, regardless of their immigration status or other distinctions.

The news conference provided an opportunity for progressives to shape a narrative about the COVID-19 pandemic that they maintain has exacerbated the country’s existing economic and racial inequities.

“When you have a system that has functioned on austerity politics and austerity economics ― that is not what we need to do,” Jayapal said. “It’s not about what the deficit is, it’s about what we spend it on.”

Spending money on eradicating poverty is far better than spending it on tax cuts for corporations, which she said is “not an investment in making a more equitable future.”