In an interview on CNN on Wednesday evening, Bill Gates acknowledged that his relationship with disgraced financier Jeffrey Epstein was “a huge mistake,” and he told the host, Anderson Cooper, that his divorce, which became final this week, was “definitely a very sad milestone.”

The New York Times reported in 2019 about Gates’ relationship with Epstein, begun after Epstein had been convicted of sex crimes. The two men met on numerous occasions starting in 2011 — including at least three times at Epstein’s Manhattan townhouse, The Times reported, citing interviews with more than a dozen people and related documents. 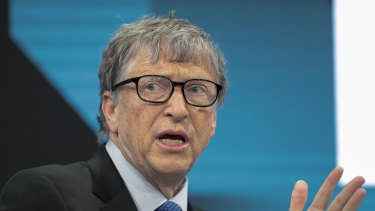 “Not a great climate thing.“: The carbon footprint being left by bitcoin has the likes of Bill Gates concerned.Credit:Bloomberg

“His lifestyle is very different and kind of intriguing, although it would not work for me,” Gates emailed colleagues in 2011, after their first meeting. A spokesperson for Gates told The Times that he “was referring only to the unique décor of the Epstein residence — and Epstein’s habit of spontaneously bringing acquaintances in to meet Mr Gates.”

On Cooper’s show, Gates said: “I had several dinners with him, hoping that what he said about getting billions of philanthropy for global health, through contacts that he had, might emerge. When it looked like that wasn’t a real thing, that relationship ended. But it was a huge mistake to spend time with him, to give him the credibility of being there.”

He added, “You know, there were lots of others in that same situation, but I made a mistake.”

Cooper asked Gates about another article in The Times, which this year reported on his wife’s concerns about his workplace behaviour. In 2018, before their divorce, Melinda French Gates had raised issues about her husband’s relationship with Epstein and a harassment claim against his money manager. On at least a few occasions, Gates pursued women who worked for him at Microsoft and the Bill and Melinda Gates Foundation, according to the reporting.

Asked on Wednesday if he had regrets, Gates replied: “Certainly, everyone does.” He added later, “Within the family, we’ll heal as best we can, and learn from what’s happened.”

Gates, the Microsoft founder, has a net worth estimated at $US130 billion ($176 billion), and the Gates Foundation now has an endowment of $US65 billion, by most measures making it the largest private charitable foundation in the world.

Gates and French Gates have pledged to keep working at the foundation on issues including global health, poverty reduction and gender equality.

“We are communicating and working at the foundation, so that partnership, we’re going to try and continue,” Gates said on CNN. “Melinda has incredible strengths that she brings that help the foundation be better. We’ve always enjoyed our work together. The two of us can go out and work with leaders and help build the organisation. That would definitely be the best thing for the foundation.”

For much of the interview, Anderson asked Gates about his views of the state of the pandemic. Gates praised the efficacy and mass production of the COVID-19 vaccines, but expressed worry about how easily the Delta variant of the coronavirus can be spread.

“We wanted to be nearer the end than we are,” he said, “but Delta’s very bad news.”

The Market Recap newsletter is a wrap of the day’s trading. Get it each weekday afternoon