CNN contributor Asha Rangappa doxxed an intern from the Washington Free Beacon, putting her personal contact information on Twitter for the world to see, and then mocked her as “Karen” when she was forced to remove the message.

Doxxing is the term for the widely frowned upon act of publishing private information with malicious intent, which is what Rangappa did to intern Alex Nester, a 22-year-old female.

CNN contributor Asha Rangappa doxxed an intern from the Washington Free Beacon, putting her personal contact information on Twitter for the world to see.

Rangappa, who is also a senior lecturer at Yale University, criticized former U.N. Ambassador Nikki Haley for going by Nikki, which is her middle name, instead of “Nimrata,” the name on her birth certificate. Rangappa was implying that Haley’s Republican National Convention claim that America isn’t racist cant be true if the former ambassador ditched her ethic-sounding name.

Nester, a recent college graduate, reached out to Yale to ask if Rangappa’s comment was appropriate rhetoric from a professor, who according to the university’s website also goes by her middle name.

Nester’s polite email seeking comment was something that journalists do on a daily basis, but the CNN correspondent took exception to a reporter reaching out to her employer. She decided to instruct her 630,000-plus followers to harass the intern.

“So @FreeBeacon has now contacted my employer to BREAK THE STORY that I go by my middle name, just like Nikki. Because this is the important news during the RNC (Feel free to respond to Alex),” Rangappa wrote with an image of the email Nester had sent to Yale that included her personal phone number. 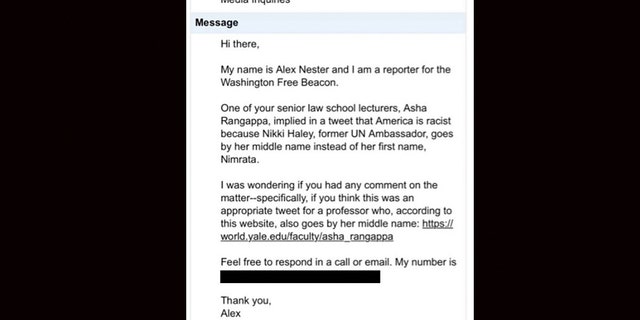 CNN’s Asha Rangappa did not black out Alex Nester’s phone number when she shared this email with her 630,000-plus followers.

Nester then received dozens of harassing messages from the CNN contributor's followers.

“I stand by my story and my reporting speaks for itself, as does Asha's tweet,” Nester told Fox News when asked for comment.

Haley took to Twitter to condemn the situation, calling it a "disgrace" that CNN would allow an employee to attach Nester.

Twitter eventually forced Rangappa to remove the tweet and she immediately went on Twitter to complain about it, calling Nester “Karen” in the process, which is often used as a demeaning term for white women.

“Twitter made me delete the tweet of the public-facing contact form I posted of the @FreeBeacon intern who presented herself as a reporter and tried to Karen me at my job,” Rangappa wrote. “Getting a Twitter warning felt like the first time I got detention as a senior in high school!”

CNN did not immediately respond when asked for comment.