The New Zealand Woman's Weekly is the latest casualty of a coronavirus-prompted implosion of the country's media industry.

Savage blows to advertising revenues have left non-government media hanging by a thread, leading to cuts and shutdowns. 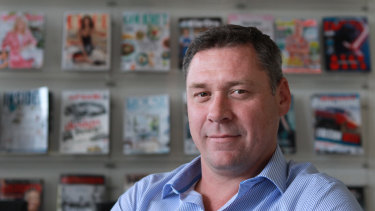 Staff at Bauer NZ were told on a conference call by chief executive Brendon Hill that they no longer had jobs.Credit:Jacky Ghossien

Mediaworks, which operates the only commercial television rival to state-owned TV1 as well as a string of radio brands, has asked employees to take a 15 per cent pay cut, while executives and the board take an even bigger haircut.

And on Thursday morning, staff at magazine publishing house Bauer NZ – the owner of the New Zealand Women's Weekly – were told on a conference call by chief executive Brendon Hill they no longer had jobs.

Mr Hill said the government's decision to classify magazines as non-essential was a "devastating blow" and left management no choice.

"We understand the New Zealand Government's decision to move to COVID-19 Level 4 but it has put our business in an untenable position," Hill said, according to the NZ Herald.

"Publishing in New Zealand is very dependent on advertising revenue and it is highly unlikely that demand will ever return to pre-crisis levels."

The New Zealand government instituted a vast lockdown last Thursday, classifying most media as essential but leaving out magazines and non-daily newspapers.

It has since reversed its position to allow rural and non-English language publications to operate.

Bauer's other titles include The Listener, published since 1939, North & South, Woman's Day and Your Home & Garden.

The irony is that audience figures for media are booming as more Kiwis tune in and read about COVID-19.

Mediaworks boss Michael Anderson said wage cuts came as his company was in a "fight for survival".

"This is a critical move for our company if we intend to stay operational in the coming months and actively try to avoid large-scale redundancies," he said.

On Thursday, Finance Minister Grant Robertson admitted that may not be enough to keep them afloat.

"We definitely want a plurality of media. The state cannot be the only media (source)," he said.

"We need to make sure we continue to support a plurality of media sources in New Zealand."

With NZME engaged in long-running talks to take over its print rival Stuff, Mr Robertson suggested he was waiting to see whether that merger was approved before looking to the style of broader government assistance.

"How we (support media) will depend a little bit on where those media outlets end up," he said.

"We understand the media sector is one of a number of sectors, as we work our way through this, who are looking at recovery plans."