It appears that the game of ownership for Crown Resorts has become a little too rich for Star Entertainment which has put pride and prudence ahead of desire.

As tempting as it may have been to stay in the game by entering a bidding war for Crown, sources say Star recognises that pitching its balance sheet against the likes of Blackstone with $880 billion in funds under management is a bet it can’t win.

A Star tilt at Crown would have been undertaken via a scrip offer and given Crown is trading on a higher price earnings multiple than Star, it makes the deal more expensive. 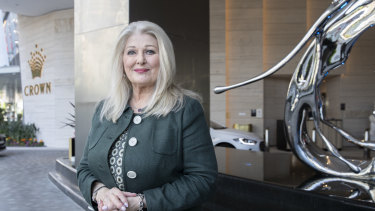 For the moment, James Packer and Helen Coonan’s four-person board seem to be on the same page.Credit:Louie Douvis

That will leave the Crown board, its advisers and its major shareholder, James Packer, scouring the market for other contenders to enter the auction room if it wants to get a deal over the line.

The current offer from Blackstone of $11.85 will almost certainly not fly. The Crown board recognises that the company’s pre-bid trading price (of around $10) reflects its current operational position – running on half its cylinders thanks to COVID and with the regulatory threats hanging over head.

But Blackstone’s bid discounts for the risk that it is not actually taking on.

The indicative bid is very heavily conditional but the really important condition is that it is given regulatory approval to own Crown’s licences.

For Blackstone, satisfying the condition around the receipt of regulatory approval to own Crown will be a long-winded process and unlikely to be decided before the two state-based royal commissions have delivered their findings and recommendations. Realistically this will take the rest of this year.

This could likely coincide with an improvement in operating conditions as the rollout of vaccinations in Australia will also be complete.

And given the comments made by the NSW regulator, there is an expectation that Crown’s Sydney casino will also be given the green light to open some time this year following completion of the company’s rehabilitation process.

Thus if Blackstone is proposing a risk-free offer, the Crown board will want it to reflect a risk-free price – one that reflects Crown’s earnings before COVID and before the NSW commission of inquiry disgorged a litany of its conduct shortcomings, including probable money laundering at its properties.

Of course there are some additional risks associated with the ownership of Crown that any buyer cannot avoid, including any fines that might arise out of the current AUSTRAC investigation and the potential for settling a shareholder class action.

But if one assumes that Crown ultimately satisfies regulators that its rehab is done, the value of its licences will not be particularly diminished.

The views of the Crown board around value, at this stage will be mirrored by Packer.

He made a highly unusual statement to The Australian Financial Review on Tuesday that “I am following the Crown board re my position” in response to a question of whether he would sell his 37 per cent stake at $11.85.

That statement can be viewed in a number of ways, but it is certainly not tantamount to a legally binding commitment.

The statement could also reflect Packer’s attempts to satisfy regulators that he is taking a very hands off approach to the governance of Crown. In response to regulatory concerns about his influence on Crown all directors that represented his interests on the Crown board have resigned and all access rights Packer had to the company’s finances have been rescinded.

This opens a more complex question of whether Packer voting his 37 per cent in a takeover that is conducted via scheme of arrangement would breach any future regulatory condition that restricts his voting power to 10 per cent. 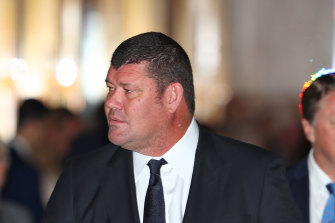 Normally, limiting voting rights would not present an obstacle to a shareholder exercising the right to sell shares. But if Crown cannot accept an offer conditional on a certain level of ownership because Packer doesn’t want to sell, the curly question of influence could come into the frame.

For the moment, Packer and Coonan’s four-person board seem to be on the same page so the solidarity hasn’t been tested.

All will be hoping that Blackstone’s offer was an opening gambit and that others will come into the auction room. But the cast of potential bidders must be looking a bit smaller now, thanks to the heightened focus on regulation.

For example, it is difficult to see how most of the large Asian casino/gaming companies would be allowed into the auction room given their links to junket operators.

Even many of the big US casino groups such as Wynn Resorts have operations in Macau that rely on junkets.

But this does not mean that other financial buyers similar to Blackstone won’t enter the race. Another private equity player, Apollo Global Management, for example, has been sniffing around Tabcorp’s wagering business so it’s logical to suggest it might take a look at least.