She had been seeing patients with coronavirus-related symptoms since late February, but in the last two weeks, the number of cases coming into her hospital surged.

Around the same time, Maheshwari’s hospital started running low on personal protective equipment (PPE), as did hospitals all around the country. So Maheshwari did what all American medical workers were asked to do last week by the Centers for Disease Control and Prevention.

She began reusing her mask instead of throwing it away after each use like she was taught to do in medical school.

“Honestly, it felt dirty. It felt gross,” Maheshwari told HuffPost. “At the end of the day, you’re taking off all the stuff that you were wearing for 12 hours, and you walk out of the hospital feeling really gross.” 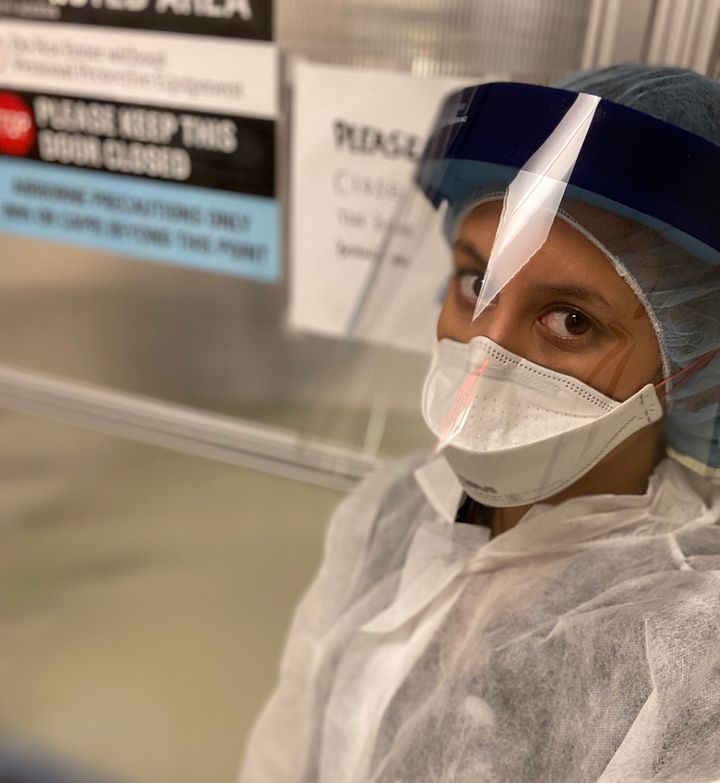 On Monday, Maheshwari, 31, woke up with a fever and tested positive for COVID-19. She’s been quarantined alone at home ever since.

While her symptoms are mild, she has already reached out to her parents to let them know what to do if her health severely deteriorates, as she’s seen in some other healthy 30-year-olds with the virus.

“Things need to change because nothing right now is sustainable with the way it’s going and I don’t see an end near anytime soon,” she said.

Maheshwari, a resident at the hospital, spoke to HuffPost on the condition that the hospital not be identified by name because of policies that prohibit employees from talking to the press.

She can’t say for certain whether she contracted the virus at work, but she had been treating virus-positive patients in a section of her emergency room that is dedicated to the outbreak.

Since Maheshwari got sick Monday, three more of her colleagues have tested positive for COVID-19.

Maheshwari doesn’t believe the federal government acted quickly enough to protect health care workers on the frontlines from getting sick.

As the outbreak stressed hospitals from coast to coast, doctors, nurses and medical workers begged the Trump administration and the general public to send them PPE and coronavirus testing kits so they could curb the spread of the virus.

Maheshwari’s hospital was no different.

On top of having to reuse their masks during shifts, she said, she’s seen low stocks of medical gowns and face shields, which protect them from infected patients who may cough droplets into the air during treatment.

Some of her colleagues have resorted to using safety goggles meant for science labs that have been donated to the hospital in lieu of face shields, which are far safer and more reliable.

“It’s not fair at all,” she said of the government’s response to the PPE shortage.

Maheshwari also said the lack of equipment is affecting workers’ ability to care for patients quickly.

At least once, Maheshwari was forced to wait for medical gowns to be restocked before attending to a critical patient who was in respiratory distress.

“It’s hard because you still just want to jump in,” she said. “But you know that you also need to protect yourself because if you jump in for this patient [and get infected] … you won’t be there tomorrow to help with the next.”

In the last week, the city has become the epicenter of the outbreak with a sharp spike in confirmed cases and nearly 30,000 sick. New York City alone had 222 deaths in the span of 24 hours, officials reported Saturday night ― 155 of those deaths occurred since the morning.

The statewide death toll was at 728 as of earlier Saturday, the highest in the country.

One doctor from Elmhurst Hospital in Queens filmed a viral video for The New York Times showing a severe shortage of supplies, including ventilators. Maheshwari says she and her colleagues are still being told to preserve their PPE as much as possible.

She has had colleagues who have had to self-quarantine, pulling themselves out of the workforce, after having a high-risk contact with an infected patient.

“Everyone reaches out and they go, ‘You’re a hero!’ But the thing is, we’re literally just doing our job,” Maheshwari said. “When we signed up for this job, it wasn’t to do it without personal protective equipment.”

“However, we feel privileged to be able to go to the hospital and fight this invisible disease and take care of our patients,” she noted. “It’s what we’ve always done and will always do, we just want to be able to do it protected.”

At a press conference last weekend, the White House’s coronavirus task force appeared defensive over the national shortage of medical equipment and said that private companies, such as 3M, Apple and Hanes, were helping to produce masks.

Officials also claimed they were sending supplies to hospitals from the national stockpile on a daily basis but couldn’t offer a specific timeline for when they would actually make it in the hands of the workers who need them.

At the same press conference, President Donald Trump claimed that medical workers were unnecessarily throwing away masks and urged them to “sanitize” them instead.

Trump also initially resisted calls to activate the Defense Production Act to compel companies to produce more equipment, saying that private companies were stepping up to address the shortages.

Eventually, Trump evoked the act on Friday and ordered General Motors to produce more ventilators ― after reports of a severe lack of ventilators in New York City swirled in the media.

“There’s a huge disconnect,” Maheshwari said of the government’s insistence that supplies are reaching those who need them. “I want them to come to the emergency room for a day. I want them to come and do a day in the life in our shoes.”

“Until we are not using the same mask every day, we still need more PPE,” she added.

‘I Don’t Know How Long We Can Last’

Maheshwari’s also worried about another essential resource being depleted: doctors and medical workers themselves.

New York became the epicenter of the coronavirus outbreak this week as hospitals struggle to find enough beds to accommodate an endless overflow of patients with symptoms.

As the death toll has risen, city officials have even had to turn temperature-controlled trailers into morgues set up outside hospitals in Manhattan. The Trump administration deployed a Navy hospital ship, the USNS Comfort, to New York City for support.

Maheshwari is concerned that medical workers won’t be able to physically keep up with the demand as it continues.

“It’s exhausting. I already got sick. Three other people got sick. I don’t know how long we can last,” she said.

“What happens when the doctor becomes the patient?” she asked. “We’re the ED, so after we’re gone on the frontline, we’re going to have to bring in other specialties, which we’re already starting to do … And it’s scary.”

Her hospital administration has already started recruiting doctors from other specialties to staff the emergency room and intensive care unit, but even that resource may be exhausted soon.

Maheshwari told HuffPost that many doctors in New York City are overwhelmed with anxiety, not just from exposure to the virus, but because of their own dwindling energy and lack of resources to fight the outbreak.