Australia, having fulfilled its role as the incubator for buy now, pay later companies, will soon watch them hatch, leave the nest and venture to the US. The first to take flight will be the oldest of the batch – Afterpay.

It won’t be the last as speculation has been swirling that Zip, which runs second to Afterpay in Australian market share, is also taking a look at listing on the US stock market.

For BNPL firms the tech-heavy Nasdaq exchange is the perfect spot to make a home. It is brimming with investors that have an appetite for disruptive growth stocks and are comfortable with paying up for businesses that trade at sometimes massive price-to-earnings ratios or companies that have yet to reach profit. On a statutory basis, Afterpay made a loss in its most recent full year to June 2020. 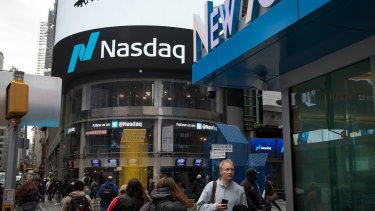 It makes perfect sense for Afterpay, and the BNPL stocks that will ultimately follow it, to move its primary listing to the US given that is where the growth is.

It would be a poor characterisation to describe Afterpay’s Australian operations as mature. But it is fair to say that they are at the older teenager stage of development – with growth left but at not the same pace.

So Afterpay’s Australian operations are not yet mature – sales are still growing at close to 50 per cent year on year – but the rate of growth continues to ease with each set of quarterly progress reports.

With a market share of 70 per cent in Australia and many merchants already on board, there just isn’t room for significant growth domestically. The addressable local market has mostly been addressed and competition from other BNPL operators and now from the Commonwealth Bank will also challenge Afterpay’s sales growth.

The US operations and those in the UK are at the early stage of development. And as Afterpay’s quarterly update on Tuesday demonstrated very clearly, the US is the outsized toddler within the global business and is now the largest contributor to underlying sales.

When the US business might leapfrog Australia in terms of profit is another question. The chunky margins that are provided by Australian merchants are far slimmer in the US.

This is the tipping point required for Afterpay (and potentially Zip) to relocate the primary listing. The listing will provide a handy marketing tool to increase investor awareness in the stock and brand awareness in the product.

The US is a far larger addressable market and BNPL operators have barely touched the sides. This is not to say that Australian and US investors have been unsupportive of the BNPL sector – quite the opposite.

Afterpay is cognisant of its support base in Australia and when it moves its primary listing to the US it will create some kind of locally traded security like a CDI (Chess Depository Interest) that allows investors to retain an economic interest in a foreign security.

While Afterpay has been a massive wealth maker for shareholders, its performance this calendar year suggests the heat has come out of the stock and in the year to date it has risen only 5.9 per cent and is down 20 per cent from its February high. The recent poor share price performance mirrors the experience of many tech stocks locally and internationally.

Fintechs understand there is an untapped pool of investors that will get a front-row seat to the increasing popularity of BNPL as it rolls out in North America.

Afterpay was included in the ASX 50 and ASX 20 index last year which was accompanied by a wave of buying from index funds. Thus most Australian institutional investors that are Afterpay fans are set in the stock – and will only trade at the margin.

US professional investors have also been quite supportive of the company with most of the usual suspects, such as Blackrock and Vanguard, well represented on the register. About half the institutional shareholders are from the US.

But the lure of the big US stage is attracting the fintechs that understand there is an untapped pool of investors that will get a front-row seat to the increasing popularity of BNPL as it rolls out in North America.

It is simply too appetising to resist.

Start the day with major stories, exclusive coverage and expert opinion from our leading business journalists delivered to your inbox. Sign up here.