The coronavirus pandemic is devastating the budgets of state and local governments in the U.S. For Republicans, it’s also creating an opportunity: States and localities where they have little chance of actually winning elections may now be forced to take GOP-advocated steps like slashing spending, cutting jobs covered by public employee unions, gutting public employee pensions and stripping social services funding.

That’s at the goal behind President Donald Trump’s dismissive claims that states seeking help during the pandemic are Democratic-run and mismanaged, and Senate Majority Leader Mitch McConnell’s derisive statement that proposed funding for struggling governments would amount to “Blue State Bailouts.”

It’s not just about failing to help citizens who don’t vote like them. It’s about using the power of the federal government to snuff out state policies across the country that they dislike.

There’s a precedent for this. President Gerald Ford opposed federal funds for New York City in 1975 when the city was at risk of defaulting on its debts. The resulting Daily News headline, which famously read “Ford to City: Drop Dead,” is being resurrected now by Democrats and the media.

“My question is, Mr. Trump, Mr. President, are you going to save New York City or are you telling New York City to drop dead?” Mayor Bill de Blasio (D) said last month. “Which one is it?”

New York Gov. Andrew Cuomo (D) used the “drop dead” reference in a tweet to Trump in February. Headlines in The New York Times, The Week, The Daily Beast, The Nation and, yes, the New York Daily News have all linked Trump to what may be the most famous tabloid headline in history.

The comparison is more apt than they may realize. Trump is following a long-running conservative game plan that uses fiscal crises to wage class warfare. 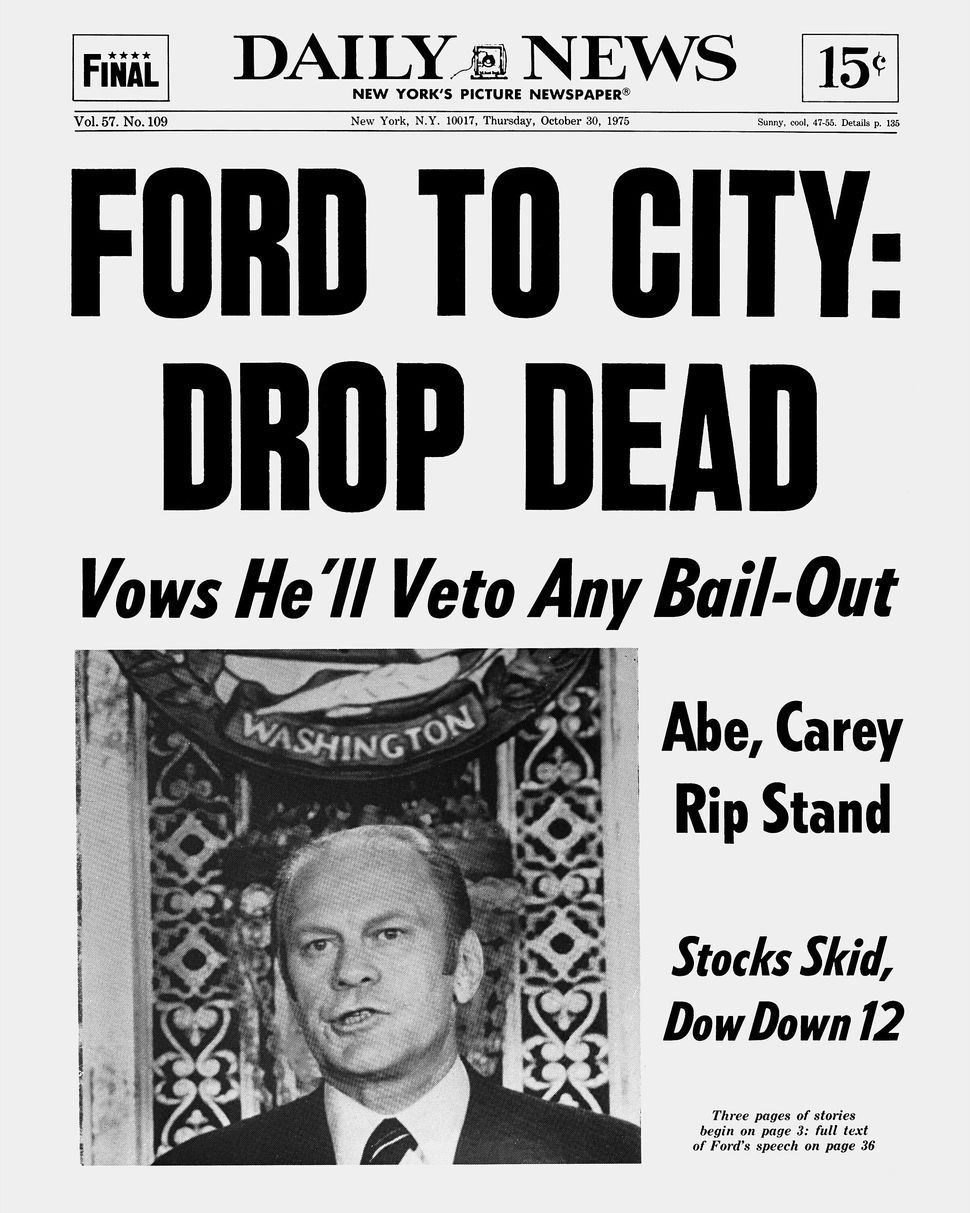 Over the course of years of protests, political action and elections in the 20th century, New York City had enacted a broad range of policies to help its working-class and poor residents. The city built a network of municipal hospitals, fire and police stations, and schools. City residents could receive a free college education at any of the 25 City University of New York (CUNY) campuses. Working-class and poor residents also had access to health care and day care services they wouldn’t get elsewhere.

To both its supporters and its critics, the city stood as an “example of the central role that government might play in addressing problems of poverty, racism, and economic distribution,” historian Kim Phillips-Fein wrote in her 2017 book “Fear City: New York’s Fiscal Crisis and the Rise of Austerity Politics.”

But New York could no longer afford its policies. The city lost much of its tax base in the 1960s as federal and state government policies and infrastructure projects encouraged population flight to the suburbs and job flight to states and countries that paid lower wages. Politicians dodged tough decisions about the city’s social spending by turning to borrowing and questionable accounting practices. The debt papered over their political quandary for years, but ultimately allowed the financial sector to seize control of the city’s politics.

By the time Ford took the podium at the National Press Club, city leaders had already come hat in hand to press Congress and the Ford administration for federal funds to forestall an imminent default or bankruptcy. The president and his advisers, including Treasury Secretary William Simon and Council of Economic Advisers chair Alan Greenspan, opposed federal aid for New York City.

Bailing out the city would set a “terrible” precedent, Ford said in his speech. He and his economic team saw aid as a moral hazard and they believed the city had brought its problems on itself. The moment called for the kind of traditional conservatism espoused by writer William F. Buckley Jr.: It was time to stand athwart history and yell stop.

In doing so, Ford and his team sought to reverse the New Deal social democratic politics that had dominated the nation for more than 40 years. This posture also happened to provide a political advantage. It helped Ford peel off some of the more conservative Republicans who might prefer former California Gov. Ronald Reagan, his looming primary opponent.

“There is a profound lesson for all Americans in the financial experience of our biggest and our richest city,” Ford said. New York City’s situation showed the “practical limit” to “our public bounty.” He promised to veto any bill that would provide bailout funds to the city.

Ford sought to pit the rest of the country against New York City, as Trump and McConnell try to do today with states looking for federal relief. “Why, they ask, support advantages in New York that they have not been able to afford for their own communities?” Ford said about Americans outside the city.

“If we go on spending more than we have, providing more benefits and more services than we can pay for, then a day of reckoning will come to Washington and the whole country just as it has to New York City,” Ford said. “When that day of reckoning comes, who will bail out the United States of America?”

The Daily News headline, “Ford To City: Drop Dead” in 144-point type, blared across the tabloid’s front page the very next day. A New York Times editorial lampooned the president as “a bemused stranger from another time and place” promoting “the political and economic dogmas of an 18th-century rural confederacy.”

Those old dogmas would soon dominate American politics. Simon, Ford’s Treasury secretary, pointed to New York as a warning about the fate of the nation if corporations and conservatives did not seize control of politics in his best-selling 1978 jeremiad, “A Time for Truth.” If the country did not throw off the New Deal “philosophy that has ruled our nation for forty years” and rekindle that old-time dogma, Simon wrote, it would wind up like New York.

In reality, Ford’s veto threat was a bargaining tactic. Politicians in New York city and state, the bankers, and the technocrats overseeing their negotiations would reach a financial deal that the president could accept. The city did not default or declare bankruptcy. Ford signed legislation that put federal government backing behind $2.3 billion in loans.

“The only way we have achieved results is to be difficult,” he said during a trip to Europe amid the negotiations. “This has been a sort of brinksmanship by the administration forcing New York City and New York state to take responsible action.”

The result was a “planned shrinkage” of New York City’s social spending ― and with it, the rewriting of the city’s social contract.

“Underneath all the technicalities of the refinancing agreements was a promise to fundamentally restructure how New York City worked ― to drastically cut the budget and shift spending away from social services,” Phillips-Fein wrote. 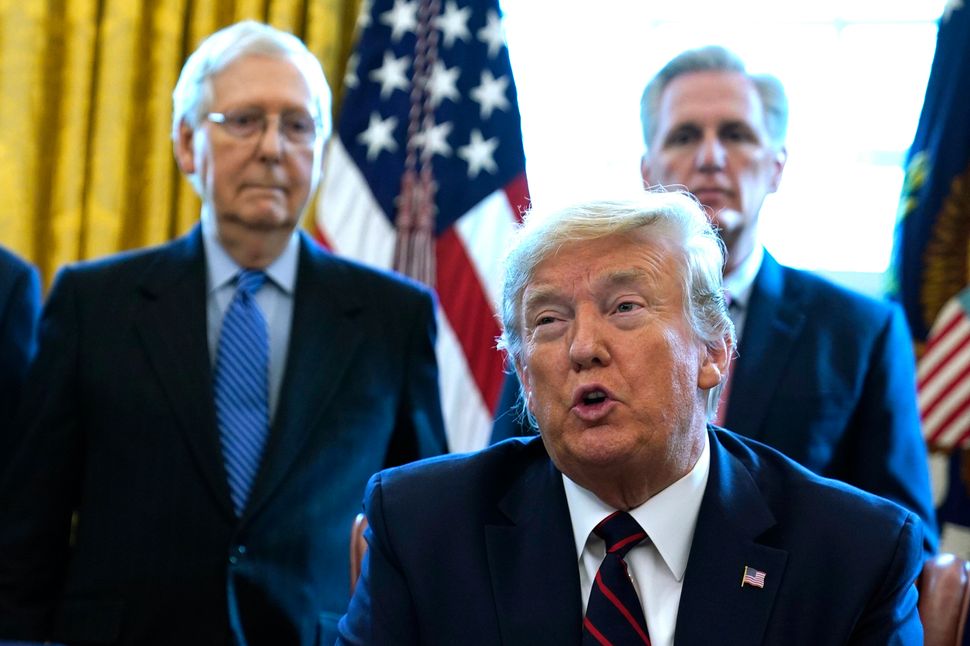 Forty years ago, the conservative movement that saw New York City’s budget crisis as a key battle in undoing the New Deal order swept into national power on Reagan’s back. And today Republican leaders are still working hard to root out the vestiges of social democracy around the country, like public employee unions and state and municipal social spending.

McConnell has made his rhetorical targets clear. “We’re not interested in solving their pension problems for them,” the Kentucky senator said on April 22.

Like Ford’s stance, the blanket opposition from Trump and McConnell to state and local relief funding is a bargaining position.

“We’re looking to help states, but we’re not bailing out states’ finances,” Treasury Secretary Steve Mnuchin said on May 3.

This time, however, the efforts to force a reorientation of policy priorities in so-called “blue states” through austerity are based on a crisis opposite to that faced by Ford and New York City.

Ford and his team hoped that restraining the policies of New York City would change the behavior of other municipalities in dire financial straits and stall a contagion of fiscal collapse. This time around, the refusal to provide aid to states is what could create long-term financial damage while deepening the pandemic-induced depression.

That is perhaps why some Republican lawmakers are not on board with using the pandemic to alter state budgets.

But Trump and his team of advisers have pushed these downward-punching class war policies as their preferred approach for the next relief bill. Larry Kudlow, the chair of the National Economic Council, has floated a combination of tax cuts and business incentives that can be extended after the crisis ends.

Trump knows these kinds of policies well, as they are what made his career in post-debt-crisis New York City. The city didn’t just save money when it slashed its budget for social services, imposed tuition on CUNY students and shuttered firehouses, police stations, day care centers and hospitals. It redirected that money to the rich through business tax incentives. Trump was first in line. He received a massive, 40-year tax break to redevelop the Commodore Hotel into the lux glass-encased Grand Hyatt New York it is today.

It was Trump’s first construction project in Manhattan. The deal launched his career. And it drained the city’s coffers, costing $360 million in taxable revenue through 2016.