It has been two years since Facebook hit the snooze button on what to do about Donald Trump.

After much dithering, Facebook said in 2021 that it suspend Trump’s account for two years for goading rioters and publicly attacking the US democratic process. 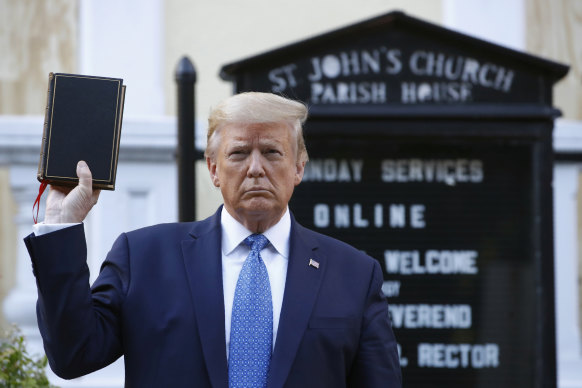 Welcoming Donald Trump back to Facebook would be good news for Meta investors.Credit:AP

With that deadline here, signs point to Trump’s imminent return — bad news for public discourse but potentially great for Trump as he makes another bid for the White House.

Trump’s return also would help Facebook. Much as Facebook’s policy teams will agonise over the delicate balance between the protection of free speech and the safeguarding of democracy — as one of the firm’s former policy directors eloquently laid out here — its priority is to shareholders who are increasingly frustrated about Facebook’s financial performance. Many of those shareholders would likely be pleased to hear Facebook parent Meta Platforms announce the former president’s return in the next week or so.

Trump’s pre-suspension posts got enormous traction: millions of likes and an indirect deluge of political arguments between friends and families across millions of Facebook accounts. His return promises to bring back that flurry of interactions — and with them more advertising dollars — at a time when Facebook’s user growth has been stalling and the company’s shares have fallen 60 per cent over the past 12 months.

Meta has cut 11,000 jobs as it tries to build on chief executive officer Mark Zuckerberg’s quixotic vision for a metaverse business, on which it pledged to spend billions of dollars. Shareholder Altimeter Capital Management has called all the investment in virtual reality “super-sized and terrifying.” With all the traffic Trump could bring, Zuckerberg now has a bone to throw his investors.

Ending Trump’s suspension wouldn’t guarantee his return. After all, Elon Musk invited Trump back on to Twitter in November and the former president hasn’t made a peep on the platform. But there might be a good explanation for that: The tech billionaire’s teasing provocations probably did little to encourage Trump back to a platform where Musk had become the star.

Trump made a commitment to primarily post on his Truth Social network — which would seem to deter him from platforms like Facebook — but the arrangement has plenty of wiggle room. While the network’s parent company states in its SEC filing that Trump can post on rival networks if he waits six hours after posting something on Truth Social, there is no restriction at all if he wants to use Twitter or Facebook for “political messaging, political fundraising or get-out-the-vote efforts.”

That’s a crucial distinction. Trump might feel bitter about his expulsion from Facebook, but it could be hard to resist the platform’s utility for spreading a political message and raising money for his 2024 campaign.

While Trump has more followers on Twitter and the platform was useful for delivering headline-grabbing messages aimed at the media, those who follow him on Facebook skew older and are generally more sympathetic and supportive to his cause. Facebook has always held greater potential for grassroots campaigning, allowing him to target specific demographics with longer, more detailed posts, memes and videos. 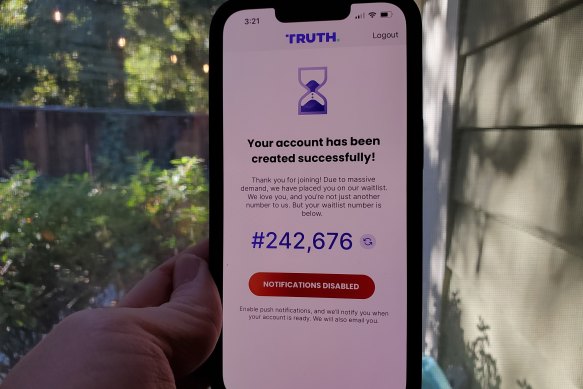 Trump made a commitment to primarily post on his Truth Social network — which would seem to deter him from platforms like Facebook — but the arrangement has plenty of wiggle room.Credit:Getty Images

With a user base north of 2 billion people, Facebook also offers a much wider audience than Twitter’s, which has about 360 million monthly active users, according to data compiled by Bloomberg. It’s no surprise that Trump’s 2016 campaign spent 80 per cent of its digital budget on Facebook, and that his new campaign team has now written to Meta demanding his reinstatement.

For Zuckerberg, Trump’s potential return is complicated. The former president used Facebook to say that COVID-19 was “less lethal” than the flu, attack his political opponents and post hashtags that raised the credibility of QAnon conspiracy theories. His actions put Facebook under enormous pressure to switch up recommendation algorithms that were steering people toward extremist groups and to dampen the spread of misinformation even though such content boosts engagement integral to Facebook’s business model.

One thing that should help Zuckerberg breathe easier: Academic studies over the past two years have shown that social media firms are getting better at stopping foreign manipulation on their networks, and Facebook has come under less pressure to censor specific content unless it constitutes direct harm, like harassment. Alex Stamos, Facebook’s former chief security officer, said on a podcast in January that social media firms needed to “resist trying to make things better” and focus on stopping things from getting worse — in other words, preventing harmful content from going viral.

What’s unclear is how long Trump’s return might last. Last year Facebook promised a “strict set of rapidly escalating sanctions” including the threat of permanent removal if Trump violated the platform’s policies again. If Zuckerberg is hoping Trump will stick to the rules this time around, he only has to look at the former president’s increasingly unhinged posts on Truth Social. His return could well be a brief one.