Alma Brigido has been out of a job for over five weeks after the Pittsburgh restaurant where she cooked for four years closed due to the coronavirus shutdown.

Now the 35-year-old mother of three has run out of savings. She doesn’t qualify for unemployment benefits since she’s undocumented. She also got nothing from the federal government’s $2 trillion relief package last month — which sent $1,200 checks to low-income Americans, but excluded millions of immigrants without Social Security numbers.

“The situation is really bad,” Brigido said. She and her kids, ages 15, 12 and 8, are scared to go out because they don’t have health insurance. They visited a food bank for the first time last week, where they got some vegetables, fruit and bread.

“I’m worried because I have three mouths to feed,” she added. “Without a job, without money, what am I going to do? When is this going to end?”

Brigido is one of about 11.3 million undocumented people in the U.S. who have been hit hard by the coronavirus pandemic and related economic crisis.

Undocumented immigrants are overrepresented in industries that have experienced massive layoffs due to stay-at-home orders, including the restaurant and hotel industries, as well as domestic workers like nannies and house cleaners. About three-quarters of undocumented people in the U.S. are Latinx, and around half of Latinx people in the U.S. say someone in their household has taken a pay cut or lost a job because of the coronavirus pandemic.

Undocumented workers also make up significant portions of the workers who have been deemed “essential” — from farmworkers to food delivery people to building cleaners — who are still going to work, risking their lives in a pandemic while millions of Americans stay home. Only 1 in 6 Latinx workers have jobs that allow them to work from home. And a staggering 38% of immigrant workers are in low-income households — many earning meager wages and working in jobs that often aren’t providing hazard pay or paid sick leave.

While California and New York City are offering some help in the form of one-time payments of $400 to $500 to certain undocumented workers, these are rare exceptions. Democratic lawmakers in Congress are fighting to include undocumented immigrants in the next stimulus package, but so far the federal government has offered no relief to these families. Meanwhile advocacy groups like the National Domestic Workers Alliance and Justice for Migrant Women are rushing to raise much-needed funds for immigrants left behind.

“We just want the government to recognize our humanity,” Brigido said. 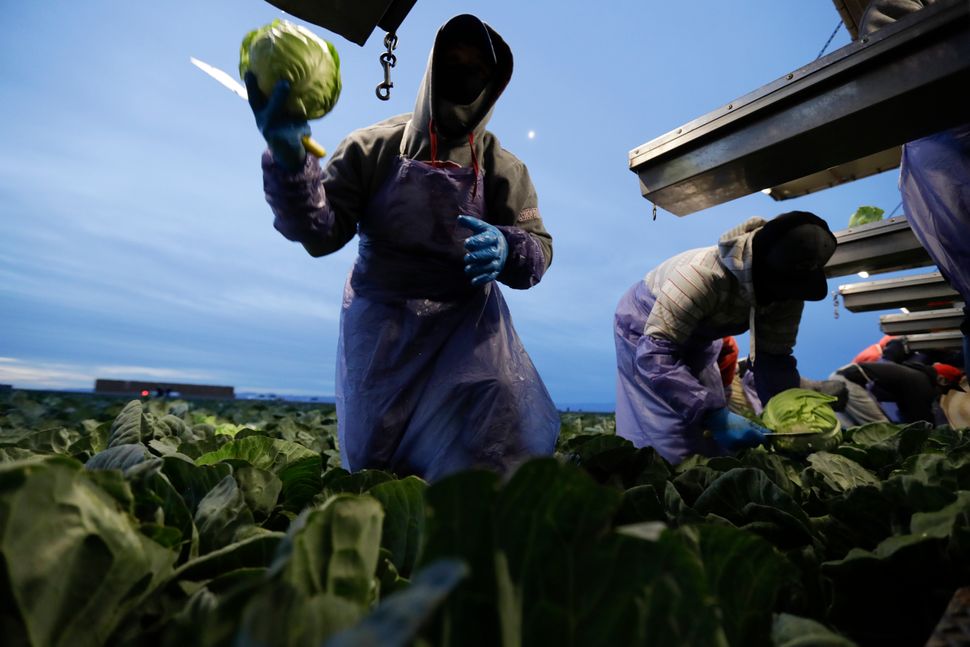 While immigrants represented 17% of the 156 million people working in the U.S. in 2018, they made up a far larger proportion of those in “front-line” industries, according to the Center for Economic and Policy Research. Nearly 60% of house cleaners were immigrants, as well as 40% of janitors, building cleaners and packagers, and 24% of grocery workers and home health care service workers.

Jonny Arenas is one of them. The 42-year-old house cleaner living in Seattle lost all upcoming jobs with his 15 clients after the state ordered people to stay home last month. Now he’s working nights sanitizing a grocery store after closing each day.

“I’m trying to survive in this crisis,” Arenas said. His household’s income has plummeted: His husband, a U.S. citizen who worked in hotels, also lost his job as hotels closed their doors, and the money Arenas now earns from working 10 to 15 hours a week is a fraction of what he made before.

Even though his husband is a U.S. citizen, they won’t be getting stimulus money: More than 1 million U.S. citizens have been blocked from getting checks because they file taxes jointly with their immigrant spouses who don’t have Social Security numbers. Millions of U.S. citizen children will similarly not see any relief because their parents are undocumented.

“I know I’m going to get exposed,” Arenas said of the virus as he cleans a store filled with shoppers daily. He bought his own mask after the store only provided gloves to protect his hands.

While data from the Centers for Disease Control and Prevention around the race and ethnicity of COVID-19 patients is still emerging, many localities are showing people of color, particularly Black people, are disproportionately affected by the virus. New York City released preliminary data earlier this month showing COVID-19 was killing Black and Latinx people at twice the rate of white people. Similarly, in San Francisco, while Latinx people make up only 15% of the population, they represent 25% of confirmed coronavirus cases so far.

Latinx civil rights group the League of United Latin American Citizens noted in a report this month that the Latinx community in the U.S. has significant risk factors for contracting and suffering harsher consequences from the virus, including living in households with more people, having poor access to health care, and working in “essential” industries.

That’s the case for Blanca Arroyo, who lives in Monterey, California, and has worked for years as a farmworker cleaning lettuce, strawberries, broccoli, artichokes and other produce in the fields. She and her husband are two of around 2.4 million farmworkers in the U.S. — of which anywhere from 47% to 70% are undocumented.

Even though she’s lived in the U.S. since 1999 — about two-thirds of undocumented immigrants have been in the U.S. for 10 years or longer — she, her husband and their five U.S. citizen kids, ages 3 to 15, will be getting no relief from federal stimulus checks.

They don’t know how they’re going to make their $2,300 rent due at the end of the month. Last week, Arroyo had to stop working in the fields to care for her kids, now all home amid school closures. Their family’s income has been cut in half as her husband is the only one able to work now.

“The fear is constant,” Arroyo said. They’re afraid of getting the virus, because they don’t have health insurance. Every time she or her husband goes out, they strip down in the laundry room and change into pajamas before coming back into the house.

They’re also afraid of seeking help, because they worry someone will ask for their papers and they’ll end up getting deported. Arroyo has to go to a new clinic soon, after the one where she’s been getting treatment for a breast infection shut amid the pandemic. The new place they referred her to can’t see her until June. Meanwhile she’s in pain and worried someone there will ask for her papers.

“Our status in this country isn’t the same as others’,” Arroyo said. “We immigrants are risking our families, our lives, so that other families have food on their tables.”

Joel Alejandro Salazar in Panama City, Florida, has also been risking his health to feed others. The 32-year-old Venezulan asylum-seeker was working at a hotel before it closed during the pandemic. Ineligible for unemployment insurance, he’s picked up a temporary job as a food shopper for grocery delivery company Instacart. Salazar says he makes trips to grocery stores to collect orders five to seven times a day. And while the company recommends shoppers use gloves and masks, he said it doesn’t provide these.

Instacart workers went on strike last month to protest the lack of hazard pay and its limiting paid leave only to those with confirmed coronavirus cases. The company said it would be making hand sanitizer available for its shoppers to order for free, but Salazar said he wasn’t aware of this. (Instacart told HuffPost that its “health and safety kits,” including hand sanitizer, were available on a dedicated website, but as of Thursday they’d be made accessible directly in the app.)

With Salazar’s mother, who lives with him, out of work due to the pandemic, they haven’t had enough money to send the usual weekly remittances to his grandmother, who is still in Venezuela.

“We’re the ones mainly going out with this ‘silent enemy,’” Salazar said of immigrant workers. “We’re necessary.”