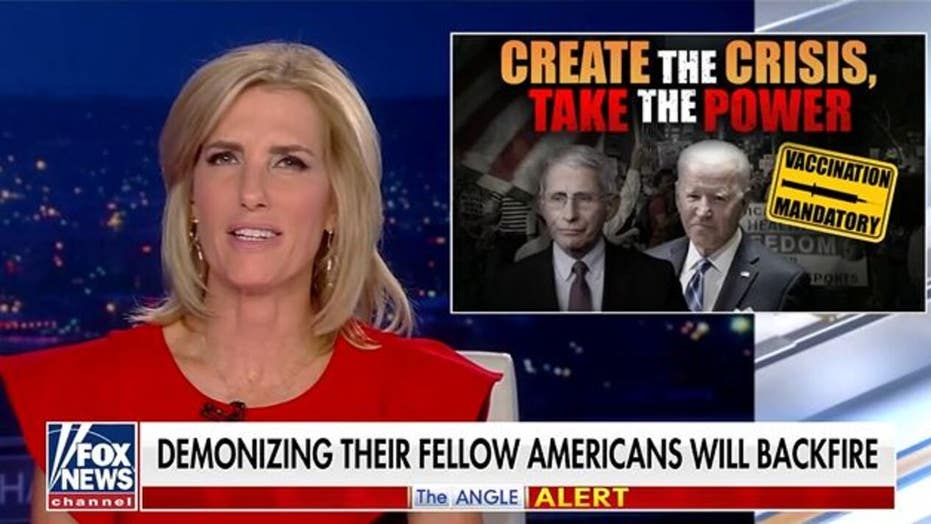 “Now that health care workers threaten the left’s COVID power grab, they’ve gone from frontline heroes to public health menaces,” “The Ingraham Angle” host said of unvaccinated workers being fired just months after being praised for their steadfastness during the pandemic.

She noted that several Democratically-run states like California, Washington and New York are mandating health care workers get vaccinated.

“These are people who are in hospitals every day so you can’t say they haven’t seen the pandemic up close or they don’t understand the risks, of course they do,” she argued. “The point is they’ve experienced it firsthand and have chosen to forego the vaccine for a variety of reasons.”

She said some workers feel they don’t need the vaccine because they have antibodies from previously having the virus or they’re young and healthy, although the U.S. Centers for Disease Control and Prevention still recommend the vaccine in each of those cases.

“Think about the insanity of this for a moment,” she said. “The politicians and the public health officials who ordered us, begged us to stay home, to wear masks, to cancel church, sports, forego weddings, all the other things you like to do, in order to save the health care system, they’re the ones actively sabotaging the health care system.”

She said most of the hospitals that are overwhelmed with patients have put themselves in that situation with “stupid vaccine mandates.”

Ingraham mentioned New York Gov. Kathy Hochul’s recent announcement that the state would look into bringing in foreign workers to fill staffing shortages left by unvaccinated employees who were fired.

“We know the vaccines help avoid serious illness, but we also know that fully vaxxed people can still test positive for COVID months later, can still get sick, and can still spread the virus,” she said. “But at least they won’t be fired.”

Vaccine mandates are just the latest example of “government officials getting their pandemic response wrong —with the effects hurting the working-class people hardest,” she said.

She contended that officials who put mandates and lockdowns in place ostensibly to slow the spread of the virus were really just “trying to protect their own power,” adding that officials should trust medical workers to make their own judgment on the vaccine.

“At some point, people in the Northeast and the West Coast, will have to save themselves from this madness,” Ingraham said in closing. “The Democrats’ policies of vaccine punishment, shutdowns and closures don’t work — so now they need villains to scapegoat. They think they found them among the unvaccinated. Next year we’ll see that that didn’t work either.”