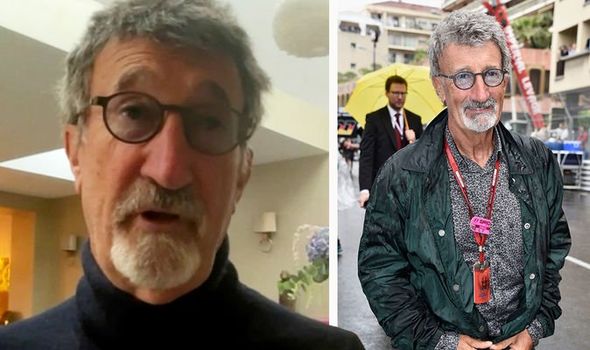 Formula 1’s former team boss Eddie Jordan OBE appeared on BBC Breakfast earlier today to discuss the upcoming race. Those watching were given a sneak peek into his house as he took part in the conversation somewhere from central London.

Eddie spoke to Charlie Stayt and Naga Munchetty from what looks to be the dining room.

Behind him, the walls were painted a soft yellow and there was a dramatic light fixture.

Hanging from a suspended ceiling with lots of glass was several lampshades which looked to be made from feathers.

They were white and round and hung above a table below.

The dining table was made of class and there looked to be pink leather chairs.

On the table was a large vase with faux flowers in an array of colours organised within.

Behind Eddie on the other side of the room was a large mirror with big gold swirls around it.

To the right of the mirror was a dramatic light which looked like procession torch.

There were lots of openings from the room, one which went off to what looked like the kitchen or a bar area.

It was glowing in an amber light behind Eddie and three pendant lights were seen hanging from the ceiling.

There were two barstools and a dramatic wallpaper.

Another wall opening looked to go into the living area.

Eddie rarely shows the inside of his home, usually he speaks to the press from the track.

The £32million boat which came complete with a bar, hot tub and nightclub looked like the inside of a swanky five-star hotel.

It came with five ensuite double bedrooms for guests which were spread across its three desk.

There was also accommodation to house another 10 crew members including a separate captain’s cabin.

The boat also boasted several lounge areas decked with sofas, a boardroom and a full-length bar.

Images also showed a formal dining room with balcony doors leading out to a sun deck plus a fully-equipped commercial kitchen.

On deck there was room for two jet skis plus a garage for bikes and other toys.