I didn’t expect this to happen. But I was deeply moved Monday by the TV image of Queen Elizabeth’s coffin being lowered into its vault at St. George’s Chapel in Windsor with the queen’s bagpiper playing her to rest.

The choreography of him playing as he walked alone down a darkened castle corridor and then disappeared seemed ancient, eternal and profound. It tapped straight into what the psychologist Carl Jung described as the collective unconscious. It felt like I was part of something as old as humanity itself as I watched.
That’s a lot to happen in front of a screen, especially to someone who has spent more than 40 years in front of screens deconstructing and writing about the images there. But looking back across the 11 days that I spent tracking media coverage of the queen’s death, I came to realize that television educated and made be more empathetic to the queen.

I still dislike monarchies and I despise the colonialism of which England was one of the most brutal practicioners. But I have come to admire Queen Elizabeth and maybe even understand a little why all those hundreds of thousands of people stood on rope lines and roadsides hoping to catch a glimpse or say a final goodbye to her. 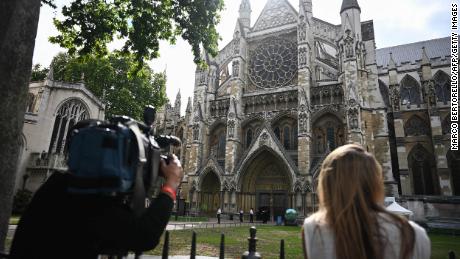 The queen and TV came of age together. In England, Elizabeth II’s televised coronation in 1953 stands as benchmark for when the medium started to overtake radio as the dominant media in the UK. For US viewers, the funeral of President John F. Kennedy after his assassination in 1963 marks a similar media moment: when TV became the principal storyteller of American life and a vehicle for collective experiences for millions.

Now, I wonder if her funeral will be one of the media events that historian use to mark the end of the TV era. Watching the events Monday, it is hard to believe we will ever see such a grand and powerful global television event again.
Will any of those people on the roadsides ever have a ruler who served for 70 years as a symbol of constancy during a time when the nation endured enormous change? Will the new media landscape of digital channels catering to individual, siloed consumption ever bring audiences together the way television did during shared moments of national celebration and tragedy in the post-World-War-II era?

As technology and politics further fragment audiences, such shared national rituals and rites of passage seem less and less likely. Countries might stage them and new media platforms might cover them, but will we leave our siloes long enough to experience and participate in them with members of tribes we have battled on, say, Twitter? In England, changing attitudes toward the monarchy will make it all the more unlikely King Charles III or any of his successors will ever connect as deeply with their its citizens as Queen Elizabeth did.
I was glad that most of the anchors and commentators Monday were wise enough not to offer any remarks during moments like the one featuring the queen’s bagpiper. But I was also grateful that several of them later explained that the bagpiper had played under her window at Balmoral for 15 minutes every day when she was in residence. It made the final moments of his playing for her Monday all the more poignant.
Cable channels MSNBC and CNN started at 5 a.m. ET. By 6 a.m. CBS, ABC, NBC PBS and Fox News were all offering coverage. The live stream offered by BBC was one of the better places to view the funeral. The commentary was understated and informed. And the producers offered shots from several vantage points of the procession routes that I did not see anywhere else. But watching them on iPhone did not do justice to the majestic and panoramic imagery being offered on TV screens.

In the end, for all the grand heraldry and pageantry of marching bands and artillery firings throughout the first six hours of funeral events, the quieter moments were the ones that seemed most evocative and resonant. The sounds of horses’ hooves and military boots hitting the pavement in perfect marching time to the beat of drums surely reminded some Americans baby boomers of the Kennedy funeral. If those sounds didn’t trigger a collective memory from 1963, the sight of an attendant holding the queen’s favorite horse as the hearse carrying Elizabeth’s remains passed on its way to Windsor castle probably did. It made me think of the riderless horse in the Kennedy funeral procession.
Of all the anchors and analysts, CNN’s anchor Anderson Cooper seemed the most plugged into the rhythms of the day’s events. More than once, he silenced any conversation among his colleagues by saying, “Let’s just listen in to the sights and sounds.”
Source: Read Full Article