A week ago, Terminal Island federal prison in San Pedro, California, had the biggest known coronavirus outbreak in the federal penal system. More than 700 inmates ― nearly 70% of the low-security facility’s population ― had tested positive for COVID-19.

But a proactive testing and segregation strategy that Bureau of Prisons officials and the Los Angeles Department of Public Health implemented late last month has seemingly produced a rapid reduction in the cases. Faced with the health crisis, officials took dramatic steps ― a lockdown of the facility, mandated testing of all prisoners, and separating inmates by their COVID-19 status.

After what the bureau termed an “aggressive testing and quarantine mitigation strategy,” more than 567 inmates have recovered, while 130 remain infected. Eight inmates have died in the pandemic.

It’s hard to celebrate what has happened at Terminal Island, a coastal facility with what BOP has marketed to potential interns as “impressive ocean views,” as a success story. Along with the deaths, inmates were cut off from email and phone calls for weeks, unable to reach desperate family members searching for information on their loved ones. And a congresswoman who visited the prison this week expressed concern about the “terrible situation” prisoners were in and the facility’s ability to implement social distancing in the prison environment going forward.

Yet Terminal Island’s actions show how critical testing can be in slowing the spread of COVID-19, which has ripped through prisons across the country. And had Terminal Island’s testing system been implemented a bit earlier, it likely would have saved additional lives.

Terminal Island temporarily shot to the top of the BOP’s outbreak list not necessarily because the disease was especially virulent there, but because it was among the first of the federal institutions to implement widespread testing of its prisoner population. The results underscored how quickly COVID-19 can spread in the low-security prison setting where inmates constantly interact in cramped communal settings.

Terminal Island began mandatory testing on April 23, after two prisoners had already died and a few others were hospitalized on their deathbeds. The testing regime revealed hundreds of inmates were infected with COVID-19, though officials said the vast majority were asymptomatic.

“The reason the numbers [were] so high at Terminal Island is because we are testing every single inmate,” said John Kostelnik, the western regional vice president of BOP’s union. “We tested everyone, and that’s why the numbers are so high.”

Kostelnik told HuffPost that only about 10% of the inmates were symptomatic when testing started last month. He said it was “extremely difficult” to practice social distancing at Terminal Island, where most prisoners live in open dormitories with bunk beds.

Those inmates testing positive began a 14-day stay with other infected inmates. Those who tested negative were retested after 10 days, and those who then came up positive were removed from the group. The “systematic attrition process,” said BOP, “significantly shortens the overall span of the virus infection within the prison.”

The federal prison in Lompoc, California, a low-security facility prison located nearly three hours northwest of Terminal Island that recently overtook it atop the BOP’s coronavirus outbreak list, began universal testing in early May. Working with a private company, BOP found that COVID-19 had torn through the facility: 882 of its 963 inmates were listed as positive as of Wednesday, and just 25 had recovered. Like Terminal Island, Lompoc officials restricted inmates’ phone and email access and worked to separate inmates by their COVID-19 status.

‘There Really Is No Way To Maintain Six Feet’

The fact that a bigger outbreak may have been curbed doesn’t mean all is well at Terminal Island.

The BOP announced the most recent death of an inmate there on Wednesday ―  James Lino, a 65-year-old who had been hospitalized since April 16 and on a ventilator since April 18. Lino was serving a 34-month sentence for conspiracy to distribute and possess more than 50 grams of methamphetamine with intent to distribute, and had been at Terminal Island since February 2019.

Democratic Rep. Nanette Diaz Barragán, whose district includes the prison, is one of the few outsiders to visit Terminal Island since the lockdown began. In an interview with HuffPost after her visit this week, Barragán she was concerned about the living conditions for inmates who had tested positive for COVID-19.

“There were like 70 inmates in this small room where there’s just bunk beds,” she said. “There really is no way to maintain six feet of social, physical distancing that we’re being asked to do.”

Barragán said she had difficulty communicating with many of the prisoners under the tour’s conditions, but that many were yelling out to the warden asking for air conditioning and to be allowed to talk to their families. Terminal Island inmates have only recently been able to communicate with their families in five-minute phone calls, according to the BOP.

“All they have is a little cloth mask,” she said. “We’re in a full gown, we’re in a full N-95 mask that seals on your face… We have a face shield on. We were fully loaded with protection, and you can only imagine what they felt like when we walked in and they’ve got nothing, and their families can’t give them anything.”

“It’s been a lot of work. Some staff members are staying at hotels because they don’t want to bring it home,” Reynoso told HuffPost. “They don’t see their children right now, they don’t want to risk it. So staff is giving up a lot of life to be able to run the prisons.”

“Every single staff member has to learn to do every other job, because we’re the ones doing everything now (rather than inmates), from cleaning to cooking,” Reynoso said. “I don’t cook, but I needed to help out and I’ve got to do a little bit of cooking now.”

Officially, 15 staff members have tested positive for COVID-19. But while inmate testing has been mandatory, BOP can’t compel that for staff members, meaning the true extent of the outbreak at Terminal Island staffers isn’t known.

“I feel like we need to be treated more by the public as first responders,” Reynoso said. “It’s just amazing what (staff members) do. We’re talking about 12 hour days. That alone drains your body.”

“These inmates have nowhere to go. They certainly didn’t bring it from the outside,” Barragán said. “The people who are exposing them are really people who are coming in and out, like staff and officers.”

David Fathi, director of the ACLU’s National Prison Project, said that even at Terminal Island, it’s “not too late” to consider release for those prisoners who haven’t tested positive for COVID-19. 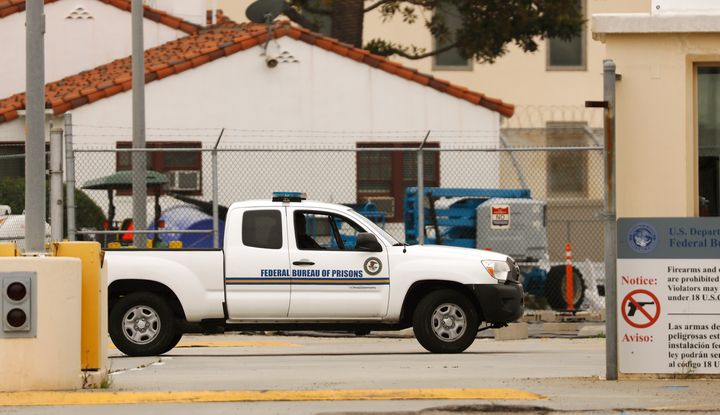 But Kostelnik, the BOP union official who helped organize Barragán’s tour, thinks proposals for much wider use of home confinement aren’t feasible. He said more than 300 of Terminal Island’s inmates are sex offenders, which makes them ineligible for such status. A history of violence also disqualifies many other inmates for home confinement.

Kostelnik criticized Barragan’s comments on the conditions at Terminal Island and said she should’ve done more to thank officers who are “putting their own safety and wellbeing in danger” to keep the prison running.

“One thing that should be acknowledged that the congresswoman failed to recognize is that we were able to test over 1,000 inmates in quick time, which was the result of hard work and many hours for our medical staff and correctional officers,” Kostelnik told HuffPost. “We are doing everything feasible to protect the community and inmates, alike.”

Universal testing of inmates won’t be enough to stop coronavirus deaths behind bars, Fathi said. The most effective way to save inmates’ lives is to reduce prison density. Just over 2,500 inmates ― a small fraction of the BOP’s population of nearly 140,000 ― have been placed on home confinement since late March.

“Really, the only thing that the experts are telling us can make a meaningful difference in slowing the spread of the virus in prison is to cut the population,” he said. “On that score, the bureau has failed miserably.”

Do you have a friend or loved one incarcerated at a jail or prison with a coronavirus outbreak? Tell them to write HuffPost: PO Box 65801 Los Angeles, CA 90065.