During a town hall that aired live on Facebook, Nez urged residents of his nation, the largest American Indian territory in the U.S., to remain “strong” and take care of each other during the pandemic despite the lack of support.

“There’s frustration from leadership ― not just here on Navajo but all of Indian Country,” Nez said. “We feel that the United States government once again has ignored or even left out the first residents, the first people, the first citizens of this country: Indigenous people.”

He said tribal nations haven’t yet seen any of the resources allocated in the three coronavirus relief bills signed into law by President Donald Trump last month.

“But you know what? We’re strong people, ladies and gentleman,” Nez told the Navajo Nation during his town hall. “We have overcome tough times and we’re utilizing our resources to help our people out there. Government can’t do everything.”

“I’m hearing about people hauling water for their grandparents, people helping get water and hay for their elders out there. That’s Navajo right there ― helping each other out to overcome this,” he continued. “And we will overcome this.”

The Navajo Nation spans roughly 250,000 square miles ― about the size of West Virginia ― across portions of Arizona, New Mexico and Utah. About 350,000 members are enrolled in the nation, making it the second most populous Native American tribe, after the Cherokee Nation.

As of Tuesday, there have been at least 148 confirmed cases of the virus in the Navajo Nation and at least five deaths. The numbers account for those living on the reservation ― both members of the tribe and nonmembers ― and do not include Navajo who reside outside of the territory.

During his town hall on Tuesday, Nez said the nation had received “some” supplies from the Strategic National Stockpile, but much more are needed.

“It’s quite alarming to hear that some of the shipment that we get won’t even last a week,” he said, adding that all 50 states are also dealing with this issue. “So we’re trying to find resources out there.”

The $2 trillion stimulus bill enacted Friday carved out an additional $1 billion for the Indian Health Service, a notoriously underfunded agency that provides health services to federally recognized tribes. The legislation also includes $8 billion in relief funds for tribal governments, though Nez suggested in his town hall Tuesday that the Navajo Nation had not yet received its share.

He told The Los Angeles Times last week that he was concerned about individual tribes having to apply for the aid. Neither the Interior Department, which distributes the relief funds, nor the Navajo Nation immediately responded to HuffPost’s requests for comment.

Experts worry native populations are especially vulnerable to COVID-19 given their high rates of diabetes, heart disease and other underlying conditions that make individuals more at risk to the disease.

What’s more, some Navajo have been reluctant to heed the warnings of the Centers for Disease Control and Prevention, due to what the LA Times described as “a long-standing distrust of the federal government.” Frequent hand-washing, as advised by medical experts, can also prove difficult in some areas of the reservation where there’s a lack of running water. 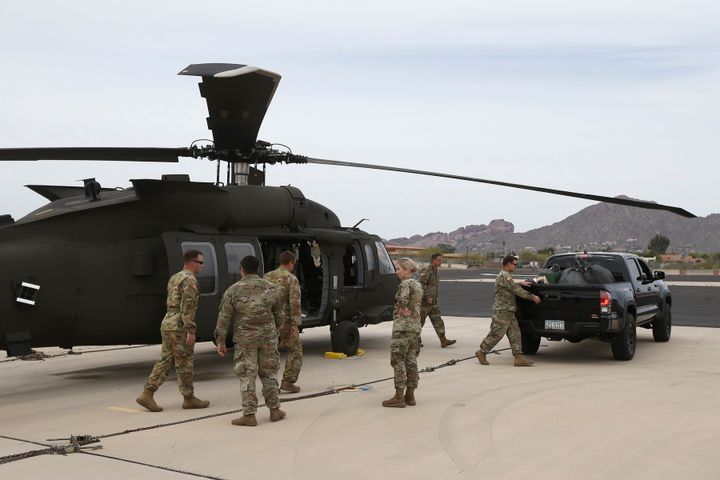 “We’re seeing incredible spikes in the Navajo Nation,” Grisham said. “This is going to be an issue where we’re going to have to figure that out and think about maybe testing and surveillance opportunities.”

She said New Mexico is seeing a higher rate of infection among younger people as well as a more immediate need for ventilators compared to other populations.

In response, Trump reportedly directed other officials in the room to look into the issue and quickly build a hospital requested by Grisham.

“Boy, that’s too bad for the Navajo Nation ― I’ve been hearing that,” Trump said.

The Navajo Nation declared a public health state of emergency on March 11. Nez has ordered all residents to stay at home unless they are deemed essential workers or need to seek medical care or obtain provisions. On Sunday, Nez announced a curfew from 8 p.m. to 5 a.m. daily that went into effect on Monday.

“We’ve got to think of our future,” Nez said during the town hall Tuesday. “We can’t let our elders leave us earlier. … We are overcomers, we are resilient and we’ll be able to get through this COVID-19.”