The company operating the National Broadband Network has claimed competition from wireless services including Elon Musk’s Starlink is threatening the viability of its business, as retail internet providers hit out at its plans to sharply raise prices.

NBN Co’s plans to raise prices surfaced this week in a redacted proposal to revise its special access undertaking, which was released by the Australian Competition and Consumer Commission (ACCC). 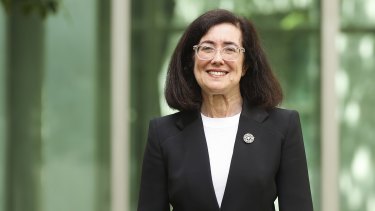 ACCC chair Gina Cass-Gottlieb has been urged to intervene on NBN pricing.Credit:Alex Ellinghausen

The framework determines how much it can charge wholesale customers including Telstra, Optus and TPG Telecom. The proposal was criticised by the ACCC, which claimed it would result in a doubling of the cost of entry-tier internet plans over the next decade and ongoing price rises until 2040.

In the redacted documents, NBN blames the planned price increase on several factors, including competition from companies that run low-earth orbit satellites – such as Elon Musk’s Starlink – and the rise of 4G and 5G fixed wireless services from Telstra, TPG and Optus. It said these competitive pressures meant it needed a sophisticated pricing model to ensure it could recover its costs over time, or otherwise its business might not be sustainable.

“A significant and growing source of competition in markets in which NBN supplies residential services is from 4G, 5G, fixed wireless network and low-earth orbit satellite operators that are expanding their footprint and aggressively marketing their services as a substitute or alternative to a NBN fixed line service,” it said in its submission.

“The extent of competition and substitution risk means that NBN faces substantial revenue sufficiency risk. The consequence of this is that NBN faces the risk of being unable to generate sufficient cashflows to sustain its business and continue to invest in the network to meet its policy obligations and the needs of end-users.”

In a strongly worded letter released on Wednesday, the nation’s leading telcos slammed the NBN proposal as “unsatisfactory” and urged newly appointed ACCC boss Gina Cass-Gottlieb to introduce an “access determination”, which effectively hands control of pricing of a service to the ACCC.

“We believe the long-term interests of end users are paramount. Current and future end users should not be compelled to underwrite NBN Co’s inefficient historical costs and subsidise its entry into adjacent competitive markets.”

But NBN Co has justified its proposal on a range of factors, including increased competition. It predicts it will lose at least 263,000 customers this financial year to fixed wireless services, and at least 283,000 customers in fiscal year 2023.

Telstra is rapidly expanding its 5G network and has priced its home internet offering at a lower rate to its NBN offering. TPG Telecom last week revamped its 5G fixed wireless service offerings and now provides customers across all its brands with lower prices than what it offers for NBN. It is expected to more than double the fixed wireless footprint to 160,000 by the end of the year.

“The shaky economics of the NBN and its moves to make affordable broadband a thing of the past is exactly why we need great alternatives like 5G fixed wireless in the market,” TPG Telecom external affairs general manager, James Rickards, said. “If the NBN can’t appropriately price broadband access, TPG Telecom will.”

An NBN Co spokesperson said it looked forward to ongoing discussion with the sector, but was unable to make any further comments as it has not met with its new shareholder minister.