A major shift in the type of office towers being built for future workers is underway, as developers and tenants opt for carbon neutral buildings.

One of Australia’s largest office landlords and developers, GPT Group, last week foreshadowed a radical emissions reduction stance in a one line sentence buried in its half-year results. 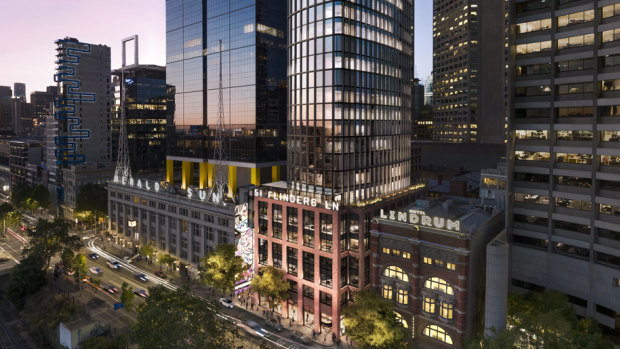 “GPT is … committing to all new office developments being upfront embodied carbon neutral,” the owner and manager of buildings like Australia Square in Sydney’s George Street and Queen & Collins in Melbourne said.

Just how consequential the developer’s decision is, may be best understood by the carbon intensive nature of the two key materials used in making modern office towers – cement and steel.

Manufacturing those two products accounts for about 16 per cent of global carbon dioxide emissions, roughly double the global car fleet.

The $539 million complex will be wholly owned by the GPT Wholesale Office Fund and stretch across two towers rising 15 and 41 levels.

Embodied carbon is a measure of the emissions created by the materials used and the construction process.

The group’s head of sustainability and energy, Steve Ford, estimates up to a third of the Flinders Street building’s embodied carbon will be reduced by utilising superior design techniques, adding fly ash – a waste coal product from steelmaking – in the building’s concrete mix and electrifying site equipment like cranes to run on green energy.

The residual emissions (about 70 per cent) will be offset through investments in protected Australian biodiverse reforestation projects in partnership with Greenfleet, he said.

“Investors do take a very serious look at your environmental credentials now when they consider where they’re putting their money,” Ford said.

“There is a strong push for ESG leadership as a differentiator, and it’s not just carbon they [investors] have a view on. It’s how their investment is impacting biodiversity loss, what you are doing for indigenous engagement, empowerment among other things.”

GPT is not the only developer changing tack as investors and tenants increasingly question the sustainability of buildings they own or occupy.

Dexus is constructing Atlassian’s new 40-storey office in Sydney, at the cost of $546 million, with the aim of halving the embodied carbon a conventional equivalent would have.

“When I talk to a lot of CEOs, they’ve got their net zero targets that they’ve set. So, they are going to look for that right product. We’ve probably seen that across the portfolio,” he said.

CBRE’s newly appointed head of ESG, Caitlin Uren, said there had been a strong focus in the industry on minimising operational emissions – the energy used to run a building – but Australia lagged other countries when it came to dealing with embodied carbon.

Uren said about 80 per cent of existing buildings are likely to be in use in 2050 and it was important to also focus on reducing embodied carbon by repositioning older stock, rather than demolishing it.

A large building CBRE is advising on that is currently being refurbished in Sydney will achieve about 60 per cent of embodied carbon savings because “they have kept all the floor levels, all the structures, but everything else has been upgraded,” she said.