Qantas has failed in its attempt to overturn a Federal Court ruling that found the airline unlawfully sacked 2000 workers in the middle of the pandemic but will not be forced to reinstate those workers.

The airline was sued by the Transport Workers Union for sacking baggage handlers, aircraft towing crews, cleaners and other ground workers in November 2019. Qantas’ move to outsource the workers was later found by the Federal Court to be unlawful and partly motivated by a desire to avoid future industrial disputes and employee negotiations. At the same time, the union pushed for the sacked workers to have their jobs reinstated, but this was dismissed by the initial Federal Court ruling after Qantas threatened to retrench them again. 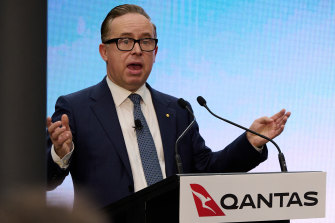 The Transport Workers Union has called for Qantas CEO Alan Joyce to be sacked.Credit:Michael Quelch

But in a judgment delivered on Wednesday morning, the Full Court dismissed both appeals and upheld its initial ruling that Qantas was partially motivated to avoid future industrial action but also that the airline did not need to re-hire the workers.

“The Court … finds that the primary judge did not err in concluding that preventing the exercise of a workplace right was more than a mere contributing cause or consideration for the decision,” Federal Court documents stated.

“The primary judge found that if the affected employees were reinstated, Qantas would, as soon as it was legally possible, retrench them.”

Qantas will face penalties and potentially have to pay compensation to workers but this is yet to be determined.

“This is an emphatic ruling – a unanimous decision from four Federal Court judges. Qantas executives deliberately targeted and attacked workers and broke the law in sacking them to prevent them exercising their rights,” said TWU national secretary Michael Kaine. “There is only one appropriate response from the Qantas board – heads must roll.”

Qantas said it would seek to appeal the Full Federal Court’s decision to the High Court and has maintained its decision to outsource its ground handling function is lawful.

“Today’s judgment does not mean Qantas is required to pay compensation or penalties. We will be asking the court to stay any further hearings on this issue until after the High Court process,” the airline said in a statement.

The company also accused TWU for giving workers false hope that their jobs would be reinstated. “The TWU has pushed a lot of misinformation on this issue.”