Qantas will formally apologise for the carrier’s chaotic recent performance and extend an olive branch to its millions of Australian customers this week, offering them $50 flight discounts, additional lounge invitations and improving reward seat availability.

The mea culpa from chief executive Alan Joyce will be issued this week after months of disarray at the nation’s airports, with the airline beset by delayed and cancelled flights, snaking queues and lost baggage.

The chaos has been blamed on rebounding demand for overseas travel colliding with COVID-related staff shortages, a shrinking labour market pool and prolonged bouts of wet weather. 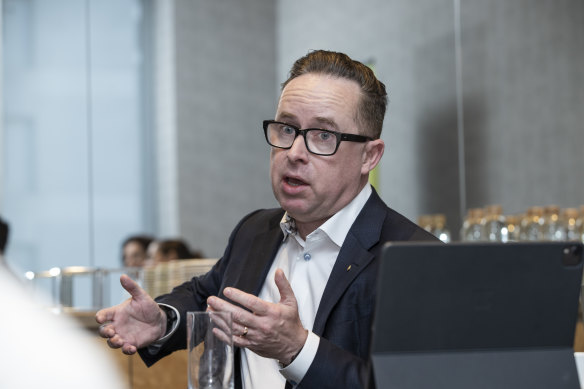 In a video message to Qantas frequent flyers, Joyce said the airline’s recent performance was not good enough despite having “good reasons” for the mishaps including cancelled flights, delays and increased instances of lost luggage.

“On behalf of the national carrier, I want to apologise and assure you that we’re working hard to get back to our best,” he said.

Australian and New Zealand frequent flyer members will be offered $50 towards a return Qantas flight and an invitation to visit a Qantas lounge.

Platinum and platinum one members have also been promised between 15,000 and 30,000 Qantas points.

The airline has also extended its “classic reward” seat availability program, where seats are booked using Qantas points, through to June 30, 2023. One in every 11 passengers carried by the airline uses a reward seat.

The formal apology is the latest move by the airline to improve their falling reputation.

This month Qantas announced it would increase the waiting time between domestic and international connecting flights by 30 minutes in an effort to mitigate the number of people arriving at their destination without their luggage.

Qantas outsourced baggage ground handling in 2020, a decision that resulted in 1700 redundancies and has been blamed for contributing to the travelling chaos. The Federal Court found the move was in breach of the Fair Work Act, a verdict the airline is appealing in the High Court.

Qantas and other aviation employers have enlisted the help of managers and executives to opt into frontline operational duties, including baggage handling, to remedy some of the staffing issues in the industry. At the start of this month, Qantas called for at least 100 executives to swap some corporate responsibilities for baggage handling and driving tugs (the vehicle used for ferrying luggage around the airport).

The airline will report its financial results on Thursday.