Qantas' international pilot group has voted in favour of a new pay deal that will cover proposed non-stop services to London and New York after the airline threatened to bring in outside pilots to operate the flights.

But the airline's ambitious "Project Sunrise" is on hold because of the coronavirus pandemic which has devastated airlines globally, despite pilots backing the plan to launch ultra-long haul flights from Sydney and Melbourne in 2023. 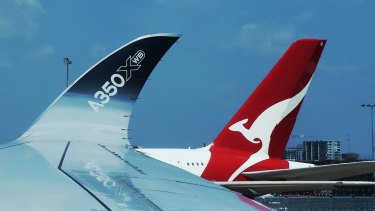 Qantas had a March deadline to place a multibillion-dollar order with Airbus for a new fleet of up to 12 A350-1000s jets to operate what would be the longest commercial flights in the world. The carrier said it needed pilots to agree to a new pay deal which included "productivity benefits" to make the Project Sunrise business case stack up before it could make the order.

Last month, Qantas threatened to hire a separate workforce of pilots if they rejected the deal.

On Monday, the airline wrote to pilots confirming the new enterprise bargaining agreement had been voted up, with 85 per cent backing the deal.

'Reaching an agreement … means that we have now met the flight operations component of the Project Sunrise business case."

"Reaching an agreement … means that we have now met the flight operations component of the Project Sunrise business case," Qantas chief pilot Captain Richard Tobiano said in an email to pilots, seen by The Age and The Sydney Morning Herald.

"The extraordinary circumstances facing aviation has seen Airbus agree to extend the deadline on our decision to purchase the A350s so we can focus on navigating the coronavirus crisis.

"When this period has passed, and it will, we will refocus our attention on Project Sunrise and the A350 order."

Australian and International Pilots Association president Captain Mark Sedgwick said the successful vote meant avoiding Qantas bringing in outside pilots for Project Sunrise flights. That threat had strained the relationship between the company and employees, he said.

“This is an incredibly uncertain time for our members, with many stood down from flying on no pay, with no end in sight,” Mr Sedgwick said.

"When we return to flying, our expert pilots will be at the helm as part of Qantas’ ultra long-haul services.”

Qantas grounded the last of its international fleet over the weekend and is scaling its domestic operations down to about 10 per cent of its regular capacity as travel restrictions tighten and demand dries up.

The airline has stood down two-thirds of its workforce, or close to 20,000 pilots, cabin crew and other employees until demand returns. Virgin Australia has stood down about 8000 workers.

Qantas chief executive Alan Joyce said this month that Airbus agreed to extend the window in which it could order a new fleet of A350s to later this year, in recognition of the uncertainty COVID-19 had created.

Get our Coronavirus Update newsletter for the day’s crucial developments at a glance, the numbers you need to know and what our readers are saying. Sign up to The Sydney Morning Herald’s newsletter here and The Age’s here.