Qatar Airways will have to seek government support eventually, Chief Executive Akbar al-Baker told Reuters, warning that the Middle East carrier could soon run out of the cash needed to continue flying.

Several states have stepped in to help airlines hammered by the coronavirus pandemic that has virtually halted international travel, with the United States offering $US58 billion ($94 billion) in aid. 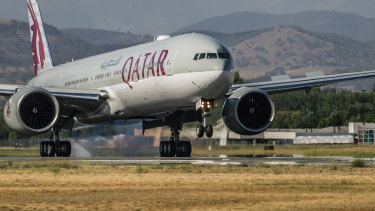 Qatar continues to fly throughout the world – including Australia – and expects to operate 1800 flights over the next fortnight.Credit:Karleen Minney

Qatar Airways is one of few airlines continuing to maintain scheduled commercial passenger services and over the next two weeks expects to operate 1800 flights.

"We have received many requests from governments all over the world, embassies in certain countries, requesting Qatar Airways not to stop flying," Baker said by phone from Doha.

The state-owned carrier is operating flights to Europe, Asia and Australia, repatriating people who have been left stranded after many countries shut their borders.

"We will fly as long as it is necessary and we have requests to get stranded people to their homes, provided the airspace is open and the airports are open," Baker said.

However, he warned that the airline was burning through cash and only had enough to sustain operations for a "very short period".

"We will surely go to our government eventually," Baker added.

He declined to say when the airline would need state aid, which could come in the form of loans or equity, but said it was taking measures to conserve cash.

Employees have taken paid and unpaid leave voluntarily and Baker said he had forfeited his salary until the airline returns to full operations. Staff would not be forced to take pay cuts, though Baker said some had offered to do so. 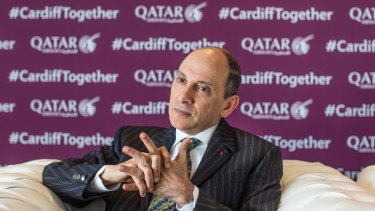 The airline had said before the pandemic it would report a loss this financial year because of a regional political dispute that forces it to fly longer, more expensive routes to avoid airspace that it had been banned from using by some of neighbouring countries.

Rivals Emirates and Etihad Airways, of the United Arab Emirates, have grounded passenger operations, which Baker said had not benefited his airline.

Qatar Airways has been operating some flights at 50 per cent occupancy or less and if it fills 45 per cent of seats on flights over the next two weeks it will carry about 250,000 passengers.

“We are not taking advantage … this is a time to serve people who want to be with their loved ones in a very trying time," Baker said.