Seven Group made the offer for the shares in Boral it does not already own on Monday evening after market close. Seven already holds a 23.2 per cent stake in the group. 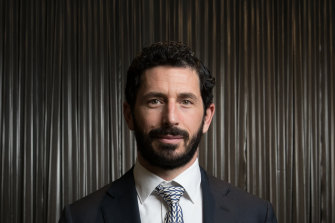 Seven Group chief executive, Ryan Stokes will reduce his duties on Boral’s board while the offer is open. Credit:Janie Barrett

Mr Stokes and his family holds a 57.5 per cent stake in Seven Group Holdings which also owns a controlling share of Seven West Media, equipment supply firm Coates Hire and WesTrac, the largest supplier of CAT trucks to the mining industry. The group is recently flushed with funds having pulled off a $500 million capital raising in April.

Seven is offering $6.50 cash per Boral share – an offer that matched Boral’s closing price on Monday.

Seven said it’s offer represented a premium of 54 cents ot the average purchase price of shares it acquired on April 8 as part of its creep provision, and 18 per cent to the last closing price of Boral shares on March 31, which was the trading day prior to the announcement of Boral’s current on-market share buy back.

“In making the offer, Seven Group Holding is seeking to increase its interest in Boral and would be satisfied for the Offer to result in it holding a total interest of around 30 per cent of Boral,” Seven said in a statement. Seven Group Holdings managing director and Boral director Ryan Stokes will step off the Boral board during the offer process.

The company explained in a statement that it was looking to build its stake to 30 per cent, rather than 100 per cent of company shares, but due to Australian takeover laws it could not acquire more shares without launching a full off-market takeover offer.

Under Australian law a shareholder must launch a takeover off once it acquires more than 19.9 per cent of a company. The one exception to that rule is the “creep” provision which allows a shareholder to grow their shareholding by 3 per cent every six months.

Boral has been hit hard with problems in its American glass business but has recently benefited from Australia’s booming housing market that has shrugged off the COVID-19 recession.