Singapore Airlines says talks with the Australian government about a travel bubble with Singapore aren’t going anywhere, and has warned the carrier needs to start planning protocols now to ensure travel can resume safely.

Talk of quarantine-free travel between Australia and the Southeast Asian city state have been ongoing since the middle of last year and the Morrison government said last week it was working on systems such as vaccination checks to allow international visitors in. 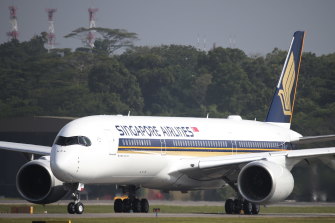 But Singapore Airlines’ regional vice president for Australia and the Southwest Pacific, Louis Arul, said the Australian government was not open to discussions about how the two countries would recognise travellers’ vaccination status, testing and tracing regimes and potential triggers for suspending the bubble.

“We’re quite keen to get that discussion going sooner rather than later because the devil is always in the details,” Mr Arul said in an interview. “If we don’t start discussions [now], we won’t be able to understand concerns and learn and evolve as we move forward.”

While there had been hopes on both sides of a bubble opening late last year, Mr Arul said his airline was no longer working towards a timeline. Rather, he said it was more concerned about how a bubble would work “because the how will determine the when”.

Mr Arul said it was clear Australia was not prepared to start serious discussions about a bubble until it had vaccinated more of its population. But that was no reason not to start planning now, he said, to ensure appropriate systems were in place when the time was right to restart international travel.

Singapore Airlines is 55 per cent owned by the Singapore government’s investment arm Temasek.

Singapore unilaterally opened its border to Australia in October last year, along with a handful of other countries that had low levels of COVID-19 transmission.

The country has agreed on the terms of a bubble with Hong Kong – which include pre- and post-flight testing – but its launch was pushed back from May after outbreaks in both countries.

Singapore has vaccinated about 41 per cent of its population and is aiming to have given both doses to two-thirds of its adult population by August 9. There were 13 new locally transmitted COVID-19 cases in Singapore on Thursday.

Mr Arul said his airline assumed a bubble would be predicated on very low levels of community transmission, agreement on testing regimes and co-recognition of vaccination certificates.

Australia is currently only open to New Zealand for quarantine-free travel. New Zealand has a “traffic light system” in place for managing outbreaks across the Tasman. It has temporarily closed the bubble to Victoria during its outbreak this month and closed to NSW on Wednesday in response to this week’s outbreak in Sydney.

Mr Morrison said last week that the government would spend the next six months monitoring how new COVID-19 variants spread overseas, and look at the effectiveness of vaccines before deciding whether to reopen international borders.

The government has refused to say how many Australians need to be vaccinated before it will consider reopening the border. Mr Morrison said identifying people who had been fully vaccinated was the key to creating further bubbles, with Singapore the top candidate followed by Japan and South Korea.

The Market Recap newsletter is a wrap of the day’s trading. Get it each weekday afternoon