The federal government’s attempt to rescue normal people ― not banks, not airlines, but actual working Americans ― isn’t cutting it.

Congress has now taken three swings at stimulus packages meant to keep the economy afloat while Americans shelter at home and businesses are shuttered. The Federal Reserve, for its part, has done a bang-up job of helping the largest businesses stay in business. The rich got tax breaks.

Meanwhile, the programs and policies put in place to help average individuals and small businesses get by are falling short.

As the weeks of the COVID-19 crisis turn into months, it’s becoming clear that the policies aren’t sufficient: not the one-time stimulus payments, or pandemic unemployment insurance, or perhaps the biggest blunder, the loan program for small businesses. And the little help offered to those who still have their jobs in the form of paid sick and family leave isn’t nearly enough to keep those people safe.

If something more isn’t done, the post-coronavirus United States will inevitably become a more unequal place, a land of low-paid worker cogs reporting for duty to giant chain stores and warehouses. If they’re lucky enough to make it out of this alive.

“Our delivery systems for giving money to [individuals and small businesses] are laggard, inefficient and have huge gaps,” said Amanda Fischer, a policy director at the Washington Center for Equitable Growth, a think tank. Yet it’s those same individual workers and small businesses that actually make our economy work, she added.

One-Time Payments Only Go So Far

Getting her stimulus check was a huge relief to Amber MacQuarri, a single mother of two in New Hampshire. She had to shut down her in-home child care center in March because she has lupus and the risks to her health during the coronavirus crisis were too high.

The stimulus money will help cover her expenses for the next four weeks or so, MacQuarri said. After that, it’s unclear. “Even though I’m OK now, I’m scared to death I won’t be in a month, and frankly, I don’t know what I’ll do,” she said.

MacQuarri had just gotten on her feet. She was a stay-at-home mother for about a decade, but her husband walked out in 2016, leaving her to care for two young kids. She turned to food stamps and state assistance to get by. She drove for Uber. Then she finally figured out a way to earn cash by watching other people’s kids at home.

She hopes to revive the business once the crisis ends. But when will that be? Experts say it could be a year or more until the economy can resume “as normal.”

It’s going to take more than a one-off check to keep people like MacQuarri whole in the meantime.

In Europe and a few other countries, policymakers understand that ― and have figured out a way to pay workers who are sidelined. For example, the British government is paying up to 80% of workers’ wages for the next three months. Employers will get the grants directly and be able to keep people on their payrolls. (In the U.S. we’re doing this, bizarrely, by forcing companies to ask for loans to pay workers.)

In the U.S., the government offers little but anxiety.

Still Waiting For Those Steroids

In late March, Congress passed what Senate Minority Leader Chuck Schumer (D-N.Y.) called “unemployment insurance on steroids.” Under this new policy, jobless Americans could also get an extra $600 a week on top of regular state unemployment payments to make it through for at least four months. The new pandemic unemployment insurance would also be available to gig workers and independent contractors.

It sounded incredible and absolutely crucial. More than 21 million Americans have lost their jobs since this crisis started. These are Great Depression-level numbers.

But the checks haven’t gone out yet in most states. Some jobless folks can’t even get through to the state unemployment agency to get regular benefits.

There are a few states that are sending out the money early because they’ve had experience with disaster benefits ― Texas, Louisiana and Rhode Island — but the rest of the states haven’t even started “processing” them yet, said Michele Evermore, a senior researcher and policy analyst at the National Employment Law Project. Washington state will be processing the benefit in a few days, she said.

“Some states, like Ohio, won’t be processing them until mid-May,” Evermore said. “I am so scared for people scratching by month to month.” She did say she’s optimistic that eventually, the pandemic benefits will start paying out. “I’m worried but also trying to look at the bright side for those who are getting through.”

For some, the delay of the steroids might be manageable, as regular state unemployment insurance will help cover the bills. But for those on the margins ― the self-employed, or independent contractors who don’t qualify for regular unemployment — things are terrifying. “It’s going to be a challenge to get benefits in their account by the time rent is due for May,” Evermore said.

Most Americans don’t have enough savings to cover a $400 expense. And already, one-third of Americans failed to pay rent in April.

What about help for those still going out to work each day, risking their own health to do their jobs serving others? The stimulus doesn’t have much to offer them, either: The paid sick leave provisions passed are so weak and riddled with loopholes that they leave out three-quarters of workers.

OSHA, the federal agency meant to protect worker safety and health, has meanwhile been largely MIA when it comes to pushing employers to keep workers from getting sick.

Small Businesses Will Disappear, Amazon Will Swoop In

Perhaps even bleaker is what’s happening with the country’s small businesses.

Equitable Growth’s Fischer put out a long research brief this week pointing out the huge gap in the way the federal government is helping the largest companies compared to how it’s decided to lend a hand to small businesses.

The Federal Reserve is pumping out trillions of dollars to help the financial system and large, public companies in truly novel ways ― enabling the big corporations to weather the storm. Meanwhile, the program to rescue small businesses has been a mess and it’s already run out of money.

The idea was that small companies could get loans quickly and use them to keep their workers on the payroll. If they do that, then the loans are forgiven. If they can’t, then the loans have to be repaid at fairly low interest rates.

Good deal. The problem is: It’s too little, too late. The money only recently started flowing, and now it’s gone, but shops have been shuttered since mid-March. Many are already closed for good.

And loans were made on a first-come, first-serve basis. That means the businesses with the best and most established relationships with their banks got to the front of the line. There are reports of hedge funds getting small business loans; franchises of restaurant chains owned by big private equity groups are also getting money.

Those with weaker banking relationships ― more likely to be minority-owned or women-owned businesses ― missed out. 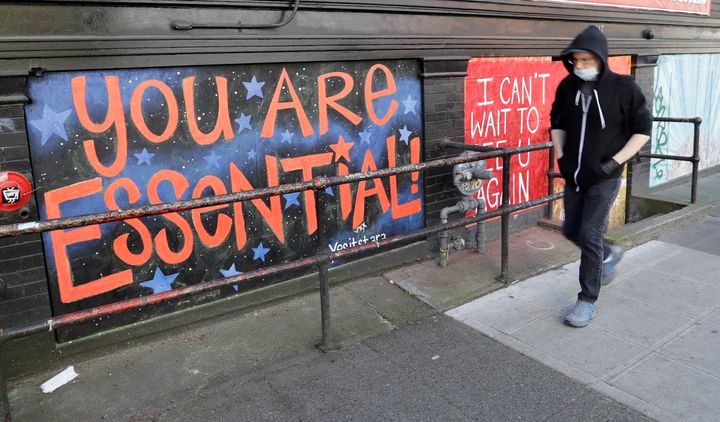 What happens when these small shops go out of business? Big companies move in.

“The local Chinese restaurant may get foreclosed on, and what company will be best positioned to take over the spot?” Fischer said. “It’ll be the Panera Bread or the Tim Hortons that is deep-pocketed.” Those larger companies have other ways to weather the recession, she pointed out ― they can tap other places to borrow money that the little guys just don’t have access to.

Small businesses have been struggling already in the U.S. as conglomerates take over retail and food industries.

The number of small retailers fell by 85,000 from 2005 to 2015, Fischer notes in her brief. Amazon already represents 38% of all online retail sales. Walmart controls one-quarter of all grocery sales in the country.

Those two companies are already dominating the COVID-19 economy as homebound shoppers struggle to buy supplies. Amazon’s stock just hit record highs. Surely, their shares of the market will expand.

These big businesses exacerbate inequalities. For small businesses, the difference in pay between managers and workers is relatively small, for example. For the big guys, the inequality is monstrous. Consider that Amazon’s warehouse workers just got a temporary raise of $2 per hour to come work and risk their lives during the pandemic.

Their boss ― CEO Jeff Bezos — has seen his net worth skyrocket by $24 billion thanks to the increase in business from the virus.

“It doesn’t take a rocket scientist to understand that local control shifting to global control at the corporate level just results in owners of that capital being able to hoard the profits,” Fischer said.