President Donald Trump has urged doctors in recent weeks to treat COVID-19 patients with hydroxychloroquine, an anti-malarial drug that has not yet been proven safe or effective for use on people infected with the novel coronavirus.

Despite pushback from Anthony Fauci, director of the National Institute of Allergy and Infectious Diseases and a member of the White House coronavirus task force, the president has continued to promote the drug during daily news briefings on the pandemic.

If Trump’s top infectious disease expert isn’t behind the president’s rush to adopt hydroxychloroquine as a treatment, who is? Some of the usual players, turns out.

Trump’s personal lawyer Rudy Giuliani, who just a few months ago was a focal point of the impeachment case against the president, told The Washington Post he’s advocated for the drug in one-on-one phone calls with Trump.

Marcus, the co-founder of Home Depot, donated $5 million to a pro-Trump PAC during the 2016 presidential election cycle and has said he’ll support his 2020 reelection campaign. JCN, the conservative advocacy group he launched in 2014, bought Facebook ads and circulated a petition that called on Trump to make hydroxychloroquine available to COVID-19 patients.

But the drug has not been proven to work against the disease in any significant clinical trials, according to The New York Times. A recent trial conducted by Chinese researchers found the drug helped accelerate the recovery of some patients, but it was not peer-reviewed. Other reports out of France and China that appeared to show hydroxychloroquine’s efficacy lacked control groups, making it impossible to determine whether the drug worked. 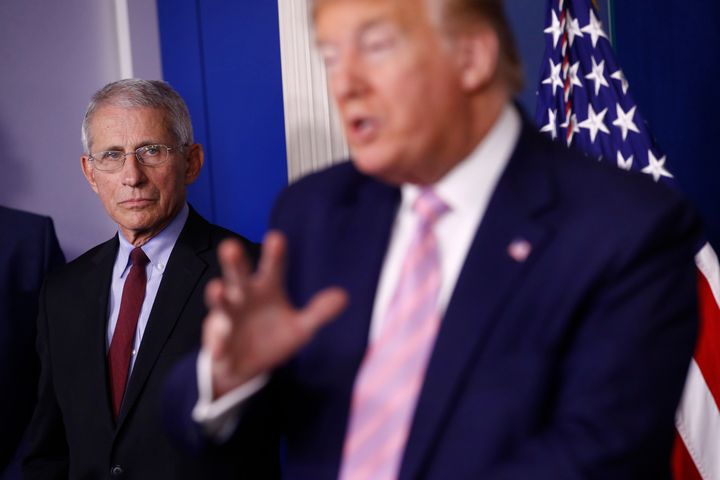 That hasn’t stopped Trump from urging health care professionals on the frontlines of the coronavirus crisis to administer the drug. It’s up to doctors to make the call, but “what do you have to lose?” Trump asked several times during a briefing at the White House on Sunday.

“I want them to try it,” the president said. “It may work and it may not work. But if it doesn’t work, there is nothing lost by doing it.”

“There may be a role for it for some people,” Megan Ranney, an emergency physician at Brown University in Rhode Island, told the Times, “but to tell Americans ‘you don’t have anything to lose,’ that’s not true. People certainly have something to lose by taking it indiscriminately.”

The drug’s potential side effects range from mild issues such as headache and nausea to serious adverse reactions, including anemia, vertigo, deafness, irreversible retinopathy, fatal heart problems and suicidal behavior, according to the U.S. Food and Drug Administration.

Trump has mentioned the potentially harmful side effects hydroxychloroquine can have on people with heart problems, but one doctor told the Times it can be fatal for people without heart conditions, too.

The FDA last week issued an emergency authorization that allows doctors to prescribe the drug to some hospitalized teen and adult coronavirus patients. Several doctors told CNN they prescribed the drug to some COVID-19 patients, but did not yet know if it assisted in their recovery.

Fauci and other medical experts say many of the reports about the treatment so far have been anecdotal and lack scientific data to back up the claims.

But Giuliani shrugged off concerns from Fauci and other medical experts, telling the Post that Trump agrees with him about hydroxychloroquine.

“I’m sure [Fauci] thinks I am an ignoramus,” Giuliani told the newspaper.

“They’ve thrown cold water on it because they are academics,” he said of scientists. “We’ve got thousands of people dying, sweetheart. And by the time you blind test it, we’ll have 100,000 people who are dead. Why don’t we get in the real world of being a doctor instead of being an academic?”

Hannity has talked up the unproven treatment recently to his roughly 4 million viewers during his nightly self-titled show on Fox News.

“I’m not a doctor,” Hannity said during his March 24 show. “But hydroxychloroquine, along with azithromycin and maybe zinc, has shown everywhere I read tremendous, tremendous opportunities to treat people to prevent death. I want to see more of that.”

The unproven treatment was the subject of a testy exchange on Saturday between Fauci and Navarro, the White House trade adviser, reported Axios.

During a meeting of the White House coronavirus task force in the situation room, Navarro reportedly said studies he’s read showed the drug’s “clear therapeutic efficacy” in treating COVID-19 patients. Fauci stated, once again, that the reports are anecdotal, prompting Navarro to lash out at the doctor.

Asked about the confrontation Monday, Navarro told CNN’s John Berman that he may not be a medical doctor like Fauci but he’s a “social scientist.”

“I understand how to read statistical studies whether it’s in medicine, the law, economics or whatever,” Navarro said.

There are other concerns aside from the potential risks of administering hydroxychloroquine to COVID-19 patients, who may already have underlying conditions that make them especially vulnerable to both the disease and the drug.

Besides malaria, hydroxychloroquine has also been used to treat some patients with arthritis and lupus. Some doctors have reportedly been hoarding the drug as interest in its potential to treat COVID-19 grows. Some people who have been prescribed the drug worry it won’t be available to them as the pandemic continues.

“No one is talking about the consequences of this hoarding and withholding,” one woman who suffers from lupus wrote in a personal essay for HuffPost last week. “They will be dire. I can tell you that when I have forgotten to take my drug for a night or two, I feel the effects. There’s no way I could make it 40 days without it taking a serious and life-threatening toll on my life.”

The White House did not immediately respond to HuffPost’s request for comment.